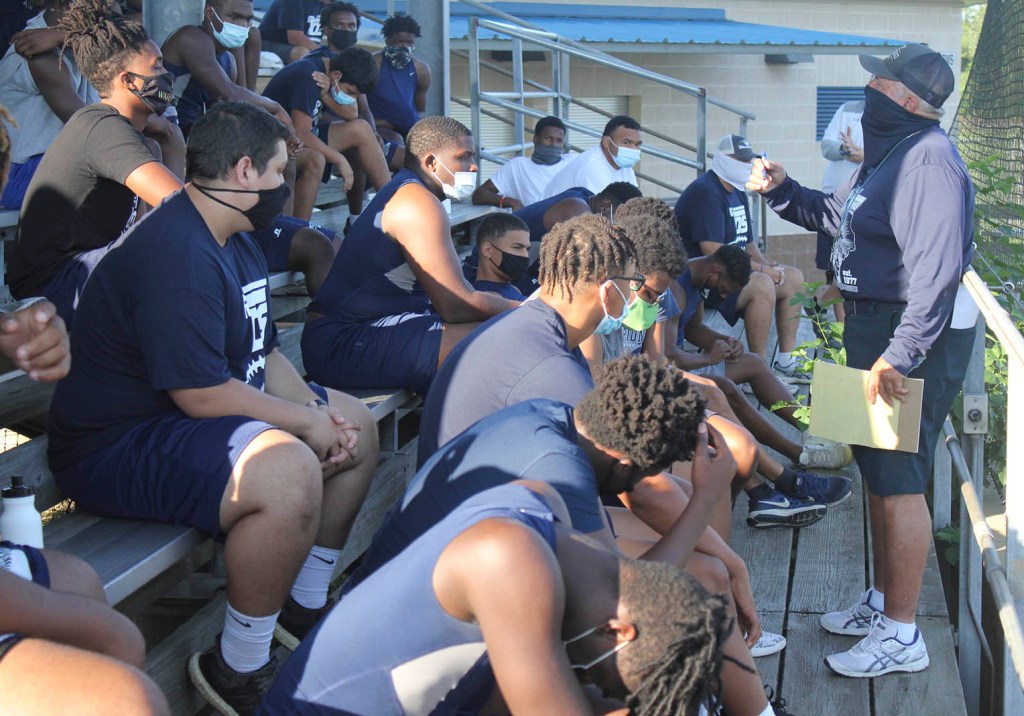 Van Wade/Orange Leader WO-S coach Cornel Thompson addresses the Mustangs Monday morning in the baseball stands as everyone had their masks on as they prepared for their first practice of the season.

Local high schools from Class 4A-and-under started football practice Monday while 6A-5A will have to wait as schools, coaches and players will not only be battling the salty August heat, but the COVID-19 virus as well this season.

That meant that all of the Orange County schools will be hitting the practice field Monday.

It was definitely a different kind of start for the Mustangs Monday and longtime coach Cornel Thompson.

“This is my 50th rodeo, and it is going to be one of the biggest challenges I have seen,” said Thompson. “Our numbers turned out great this morning and they have really been up the past two weeks. Only a couple kids didn’t show up. We’re just glad to get it cranked up.”

Without question, it is a whole new world with COVID-19.

“It’s a little strange to be ready to get things going and yet at the same time, being afraid of the virus,” said Thompson. “Every day dealing with that, makes everyone nervous. We have installed every precaution possible to keep the kids safe, and they have done a great job at wearing their masks. There are so many precautions like keeping the showers cleaned and sanitized, making sure all of the laundry is clean and safe and making sure that they stay hydrated now more than ever.”

The Mustangs reported to practice Monday at 8 a.m. and met in the baseball stands for a meeting. They ran the stands and hit the weight room before hitting the practice field.

The Mustangs will have their media day for their football program and mugshots on Saturday, Aug. 8 at 9 a.m.

WO-S will open its 2020 campaign as of now, Aug. 28 on the road to face 4A Division I power Waco La Vega at a neutral site at Madisonville High School.

“If there are no kinks a long the way, we’re going to try and get prepared as much as possible with the scrimmage with Vidor, and then it all gets real Aug. 28 when we take on those La Vega Pirates,” said Thompson. “It’s going to be a little different now that bands and drill teams can’t go on the road and that is something the kids and all of us are going to have to adjust too but we’re hoping to take a few good young men to Madisonville, Texas and try to get after it.”

The Little Cypress-Mauriceville Battlin’ Bears have made the postseason six out of the last seven years and the program snagged its first playoff win since 1997 last season when they rolled past Stafford 48-21 in a bidistrict romp.

Coach Randy Crouch welcomes seven starters back on each side of the ball as they will look to better last season’s 6-5 mark and 3-2 district record.

LC-M players 10th through 12th grade reported to the fieldhouse at 7 a.m. Monday while ninth graders reported at 8 a.m.

The Bridge City Cardinals will look to fly into the playoffs again this year as the program is going from 4A Division I down to 4A Division II after Coach Allen DeShazo and staff led them to the postseason last year.

The Cardinals will report to practice at between 4 p.m.-4:15 p.m. Monday and will hit the field as fast as they can.

The Orangefield Bobcats will look to punch in yet another playoff ticket this season as they have moved back up to 4A Division II after competing in 3A Division I.