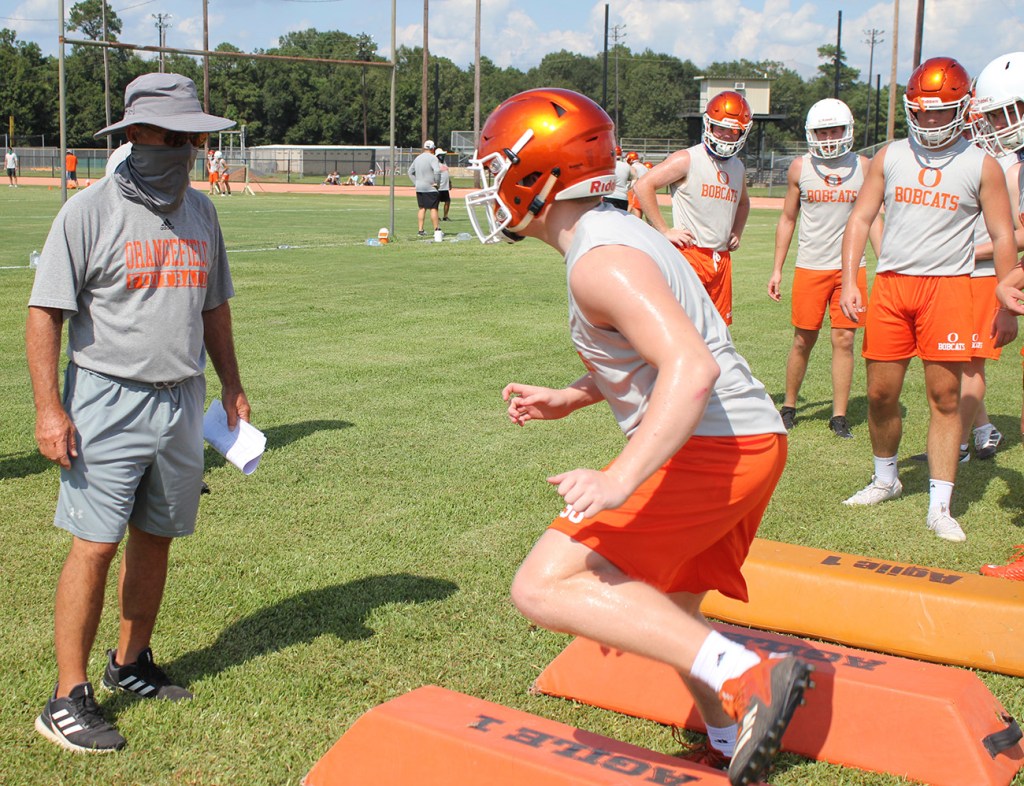 Van Wade/Orange Leader The Orangefield Bobcats got in their first practice of the season Monday at their practice field, running drills after working out in the weight room.

ORANGEFIELD – It was smothering hot at the first day of football practice for the Orangefield Bobcats Monday afternoon but it sure was thrilling to get back on the field for the players and for the coaching staff.

“It’s 100,000 degrees, the heat index is over nine million and it’s like playing ‘Frogger’ in the middle of the Interstate 10, it’s so hot,” said Orangefield Athletic Director and head football coach Josh Smalley. “But it is a great thing too because we’re back out here with the kids. Sure, we had some summer workouts, but this is the first time since March that we are all here together and on the same page.”

Of course, the Bobcats are going through all of the health protocols it takes to help fight off the COVID-19 virus.

“Kids have adjusted to wearing the masks inside the dressing room and weight room,” said Smalley. “We want them to be safe and healthy. We’re making sure everything is sanitized and wiped down throughout the fieldhouse. So much goes into it, like how many are allowed to dress out at the same time. How are we going to operate the shower system. How is the best way to make sure they have water and have it safely out in this heat. A lot goes into it and we are prepared to make it all happen. It’s just great to see them out on the field.”

The Bobcats will look to punch in yet another playoff ticket this season as they have moved back up to 4A Division II after competing in 3A Division I.

Coach Josh Smalley and staff welcome the return of seven offensive starters and four defensive starters off a 9-2 playoff unit. They did lose a large senior class and will turn to a younger group this year, hoping they will rise up.

“We have about 70 or so kids right now out here,” said Smalley. “It’s kinda funny, we had larger numbers out the last two years in 3A then we do now but that’s okay, we competed in 4A with these type numbers before. I really wished we could get a couple scrimmages under our belts instead of the just one so we could get some more looks at kids. We’re going to have get ready to compete in one of the toughest 4A districts in the state for sure.”

The Bobcats will have their program and mugshot media day Saturday, August 8 at 8 a.m. They are planning to have their Orange & White scrimmage Aug. 14.

Orangefield will open its season Aug. 28 at Anahuac