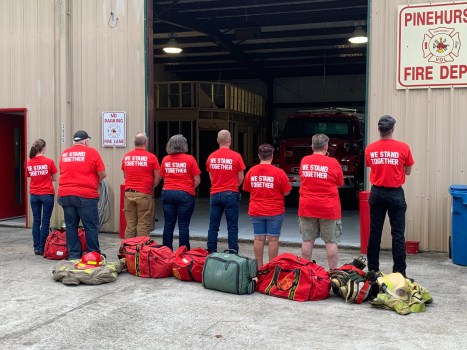 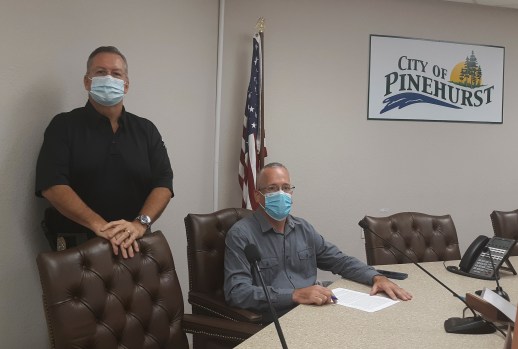 What began as a change in ambulance services for ESD#1 turned into a walkout by the Pinehurst Volunteer Fire Department as 9 members resigned on Monday during a meeting at the fire station located behind Pinehurst City Hall.

ESD#1 serving in the Vidor area changed ambulance services which lead to the city of Pinehurst changing it’s dispatch service to ESD#2 which services the Bridge City area. It was during these discussions with the new dispatch service the city was asked which calls did they want to respond to.

“I am both disappointed and disheartened in the blatantly false information former Pinehurst Volunteer Fire Department Chief Shon Branham has been relaying to the media, and more importantly, the citizens of Pinehurst,” Interim City Administrator Jerry Hood said. “Additionally, I would like to ensure the Citizens of Pinehurst that at no time was there a stoppage or denial for fire and medical services. The City of Orange Fire Department is currently providing fire services for the City of Pinehurst. Medical services have been and will continue to be provided by Acadian Ambulance Services.”

A recent agreement with the Bridge City Fire Department to provide dispatch services was based on the number of responses formulated on a three year average.  Naturally, stopping unnecessary calls for service would eventually curtail the cost; however, cost savings was never put in front of human life. Once facts were learned, the Administration wanted to ensure that the services to the citizens are done so above board and with the best efficiency and effectiveness possible.  Branham was entrusted by the council to provide these services and they depended on him to make decisions that were in the best interest of our citizens.  Having unqualified, non-medically trained personnel responding to calls throughout the city is not only a liability when they respond  “hands on” with these patients, but causes undue danger when driving with emergency lights and sirens activated, exceeding the speed limit and at time disregarding traffic control devices, according to a statement released by the city on Tuesday morning.

“We tried to work out a deal with the city manager,” Chief Shon Branham said in a phone interview prior to the meeting. “They will vote to stay or to go.”

And to go is the result of the meeting as the members lined up in front of the station with their gear, sat it down and turned their backs.

The back of the shirts they were wearing reads: “We stand together.”

“Now he wants a closed meeting without the rest of my department,” Branham said.

Less than eight hours before the fire department met to vote on the walkout, Hood had offered multiple meeting times with Branham.

“I did add the meeting should be at 4:30 p.m. at the latest so we would all be able to come to an agreement and move forward,” Hood said. “I gave Chief Branham multiple dates and times to meet, with an attempt to be flexible for all attendees. After exhausting all efforts to meet with Chief Branham, he refused to agree to meet on the dates and times given and decided to walk out on the City of Pinehurst.  Chief Branham failed to contact the City of the walkout.”

While the volunteers have been going door to door in the city for signatures for a petition to not have the calls they go on restricted, one volunteer stated in a Facebook post it was more than the call restrictions.

“… Today our whole Fire Dept has walked out due to the city Manager failing to hear the voices of the first responders. Also I feel my life is no longer safe to enter a fire due to expired equipment. I stand with my Dept. If my fire chief walks out. I walk out.”

“This came about when the city administrator deemed that all medical calls were unnecessary for us to respond to,” Fire Chief Shon Branham said in a previous interview. “In our view, as first responders, breathing problems, chest pains, childbirth, choking, falls, diabetics, seizures, strokes, unresponsive persons, and unconsciousness are calls we feel necessary that a first responder should go to.”

The reason these are deemed unnecessary calls is due to an increase in dispatch service contract fees.  The service went up $1,100 when Pinehurst had to change dispatchers from Orange County ESD#1 to ESD#2 dispatch.

The price increase came from a three-year average which totaled $25 per call, which made the increase more than what the city had paid for the past 10 years of service.

A CPR in progress call is the only medical call the department can go on according to the changes. The proposed budget for 2019-2020 for the fire department is $48,890 according to the approved budget on the city’s website. Of that amount, $6,000 was budgeted for fees- fire runs and $13,000 for contract dispatch services. With the new dispatch service, the cost of the services would now cost $14,100 per year.

“Former Chief Branham does NOT hold the necessary certifications to provide life-saving care for all medical calls that he requested to respond to,” Hood said during the press conference. “Most first responders who did not possess the proper certification and who have no formal medical training, with the exception of CPR certification, were running emergency traffic (Lights and sirens) to medical calls often arriving minutes after Acadian Ambulance was on scene.  Some of these responded to nursing homes and medical clinics where trained medical staff was already on scene and AFTER they were cancelled by the ambulance service.”

Police Chief Hanauer added those with certificates could be found at the Texas Department State of Health Services website.

It is the practice of Acadian Ambulance Services to notify all local jurisdictions any time they are responding to a medical call in the various jurisdictions.  It was learned that former Chief Branham had instructed their dispatch service to dispatch them to all calls Acadian was responding to regardless of the nature.  A follow-up into this situation revealed that although Pinehurst is listed as a first responder organization with the Texas Department of State Health Services, there are only two current members of the Pinehurst Fire department listed as first responders who hold a basic EMT (Emergency Medical Technician) or above. A third party listed has an expired EMT certification and another listed is no longer a Pinehurst volunteer.