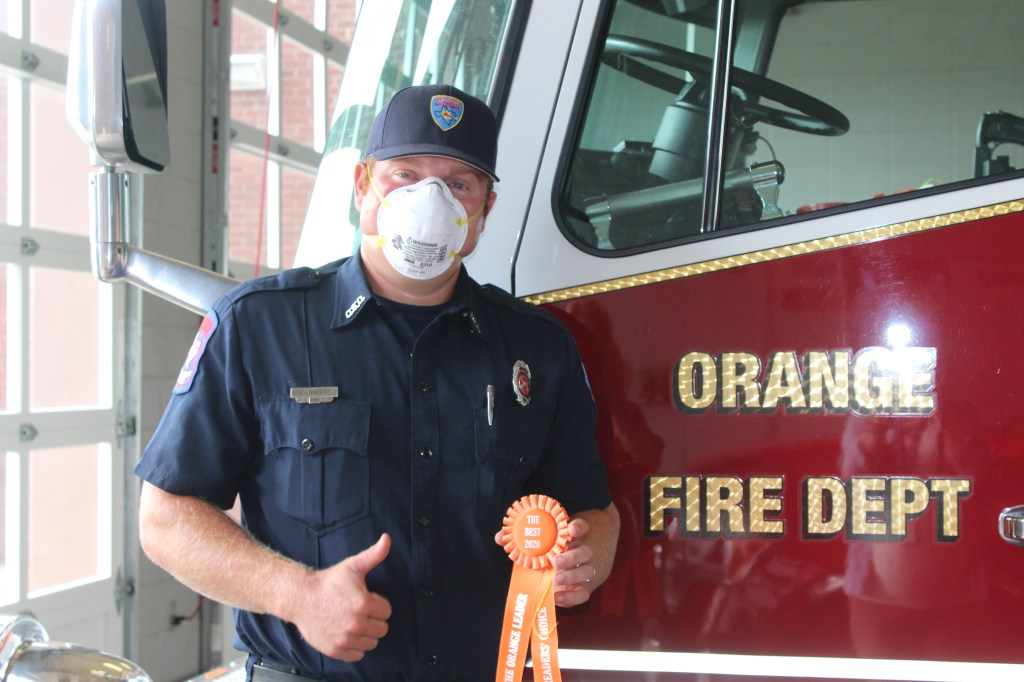 Photo courtesy of the city of Orange Greg Gravett, with Orange Fire Department, is the Best Firefighter in Orange County according to the readers who voted in the annual Best of Orange County this year.

This Christmas will mark 10 years Greg Gravett has worked at the city of Orange’s Fire Department and this year he celebrated Christmas in July as he was named Best Firefighter in Orange County.

“I started on Christmas day, so I always tell them I am the present to the fire department,” Gravett said as he laughed.

When he was hired, he was two weeks shy of turning 20 but knew he was starting a career.

“I found out in high school that my great uncle Bobby Gravett was with the fire department for 40 years,” Gravett said.

The young Gravett attended the Fire Academy straight out of high school and then spent eight months working the BP Oil Spill before there was an available opening at the station.

“I have been here ever since,” Gravett said. “My older brother Donnie Gravett came to the station after that. He is my older brother, but I have seniority over him here.”

It is easy to see why Gravett received so many votes from citizens. He is quick with a smile and a laugh.

“The best part of being a firefighter is the interaction with the public,” Gravett said. “I have lots of nieces and nephews, so I enjoy the PR with the kids.”

Gravett’s wife, Hillary, is expecting their first child in August.

“I enjoy helping and serving the community,” Gravett said. “I am also Union President, so I feel I have the respect of my co-workers. I take pride in representing the guys.”

“I enjoy driving a big red truck. That is always a perk,” Gravett added with a smile.

Generally speaking, a quint carries fire hose and ground ladders and has a fire pump, a water tank, and an aerial device. When comparing the quint with an aerial-traditional ladder truck-they both shall have an aerial device of 50 feet minimum. The ground ladder complements on an aerial increase to 115 feet, according to www.fireapparatusmagazine.com

“We do not have the aerial on this truck,” Gravett said. The aerial, by his definition, would mean a bucket on the end of the ladder.

It is not the first time a member of the Orange Fire Department received the honor of Best Firefighter. Captain Terry Veitch said he won three or four years ago.

“Gravett is hardworking,” Veitch said. “He works with the new rookies and puts them through the ringer on how to operate the truck. He tests their knowledge and makes sure they have a good understanding.”

Veitch said it is important to know the person next to you has that understanding in this type job.