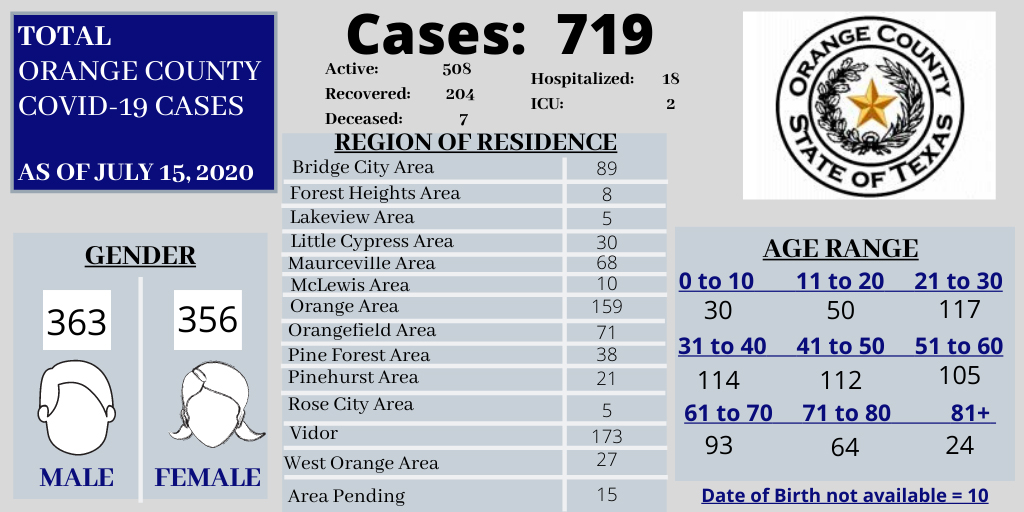 COVID cases rose by 232 cases this week in Orange County. Last week, the numbers were 487 and now there are 719 cases of COVID in Orange County. Of those 508 are active. While over 200 have recovered since the first outbreak, seven have died from the virus.

At this time 18 are hospitalized, six more than last week.

Orange had an increase of 45 persons testing positive for COVID since the numbers came out on July 8, 2020. There are now 159 cases reported in Orange compared to last week with 114 cases. These numbers all cases where a person tested positive.

Bridge City almost doubled the number of cases in a week jumping to 89. Last week the city had 48 people how tested positive since March.

The city of Vidor also saw a jump in cases with 173 persons. Last week the city had 127.

Little Cypress area doubled the number of cases in the area with 30 this week. The numbers last week were 14.

Mauriceville also saw an increase of 18 more cases with 68 this week.

Orangefield area also saw an increase of 21 persons jumping from 50 last week to 71 this week.

Rose City had five cases this week. Previously, it had reported one case.

McLewis area stayed the same with 10.

There are 15 persons whose location is still pending at this time.