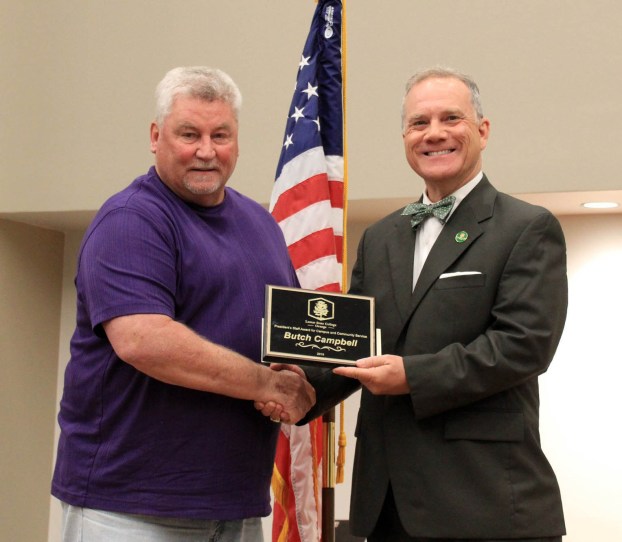 So many former students over the years, when asked of their memories of attending Lamar State College Orange (LSCO), usually come up with one name first.

That being – Mr. Butch Campbell.

Butch has been an essential part of LSCO since he joined the campus in the mid-1970s and his contributions are endless.

Originally, Butch was hired as a faculty member in the Physical Education department and even started a water-skiing team for the college at one time.

Many of the students from the late 1980s remember those great days when Campbell taught P.E. classes and had them at the racquetball courts in Little Cypress and many remember the great basketball games that were had at the old gym at the old Cove School in West Orange.

Long-time friend and former LSCO student Jay Hall, who now lives in the San Antonio area and serves as the Assistant Chief for Texas Division of Emergency Management for Region VI remembers those great times he had with Campbell back “in the day” and now.

“Butch is an amazing person and you just never hear many people working at a place for 44 years but when you think about Lamar Orange, so many of us that went there think of him first,” said Hall. “He also knows that I am still one of the two people that beat him in racquetball like a rented mule.”

More recently, Butch served as the Director of Security, working diligently to protect the faculty, staff, and students.

Gina Simar, who was Dean of Health, Workforce and Technical Education, and just recently retired from LSCO after 28 years, loved what Campbell brought to the table each and every day.

“Butch is just one of those amazing people that you could always count on,” said Simar. “He was one that always worked quietly behind the scenes.”

In addition to his assigned duties, Butch has led a number of volunteer committees at LSCO and has received countless awards including the President’s Award and numerous Staff Favorite awards. He is the founder of the Annual LSCO Spring Day, started in 1976, and the LSCO Elves Committee, which raises money for local charitable organizations.

“Butch has always been all about the students and he has always gone that extra mile for them,” said Simar. “He always went that extra mile to help students succeed from helping some of them get books over the years to creating fun activities for all. His big heart for others enabled everyone to come in contact with him feel special.”

Hall knows that Campbell was all about the students and making them all feel important.

“I took a 10-year hiatus from school and when I wanted to go back and start working on my degree plan, Butch was right there all the way helping me along any way possible,” said Hall. “He hired me part time to work in the Student Center, mainly in the evenings and weekends as I went to school earlier in the day and he did so many other things as well, such as getting me in contact with people. I love picking with him but I’m also very grateful for everything he has done. There are so many people out there that can say the same thing. He may be retired, but that man, I promise, will stay busy helping others.”

Butch has also spent countless hours serving the community and his two Julie and Ben Rogers Community Service Awards are a testament to his servant’s heart. Butch serves as a board member and volunteer to countless organizations.

Longtime Lions Club member and organizer Stump Weatherford is thrilled to work with Campbell every year through all sorts of projects.

“Butch is a great guy and he will do anything to help anyone out,” said Weatherford. “He’s a very intellectual guy and he’s been a big influence in our Lions meetings over all the years. He’s very witty and has a great sense of humor.”

Campbell has certainly been a bright light during all of the tremendous Lions Club Carnivals in the past.

“Butch eats the carnival up and loves it so much,” said Weatherford. “He has ran the Kiddie Cars ride for years and years and gets a kick out of all the little ones. He recently took over the history of the club that goes way back. There is no question, he follows the Lions motto ‘We Serve.’”

He has served as a participant of Cops and Kids for more than 20 years dishing out his famous hot dogs and links as well as Master Chef for many local fundraisers and banquets. He has been a board member for Orange Campfire, March of Dimes Walk-Chair, Back to School Orange County, and Orange Chamber of Commerce.

“Butch does so many things and he has never cared about being in the limelight,” said Weatherford. “He’s always been there cooking a thousand hot dogs at Cops and Kids and he does so much of the cooking at the annual Easter Egg Hunt. He is just a tremendous asset to the entire community.”

There is no doubt that Butch will use the extra time on his hands to continue serving the Orange community in many ways.