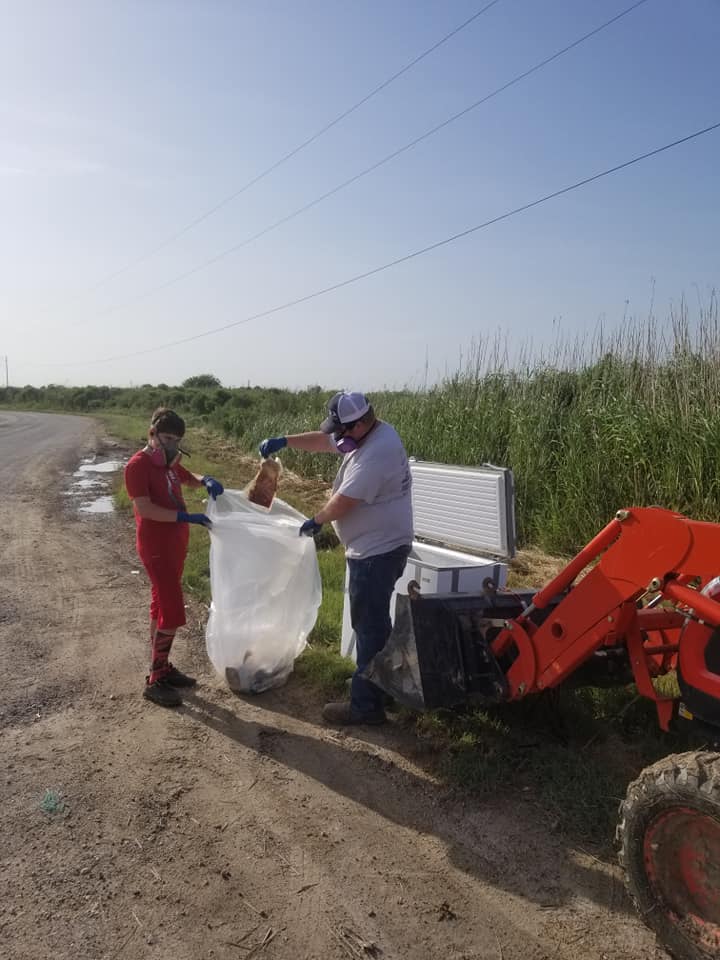 Linsey Williams was surprised at the amount of trash at Bailey’s when she visited the popular fishing spot in May.

“There was trash everywhere,” Williams said. “There were hooks, lines and just trash. I just had a baby and grew up fishing there and looked forward to bringing her out there one day. It used to be so nice and to see it like this…It’s like people don’t care anymore.”

The site of the place was not acceptable to Williams and she started organizing a twice a month clean up.

“There was a deep freezer sitting out there for two months,” Williams said. “Michael Dickson brought out a tractor to haul it out. It was a quarter of the way full of rotten meat. He dug all that meat out and put the appliances by the curb.”

The freezer was not the only appliance found. She also found a refrigerator, tires and car appliances and parts.

“We counted 10 cats in one feeding area,” Williams said. “There are three feeding areas plus several feral cats.”

“We estimate there are 50-100 cats out there right now and that number could triple by the end of the year,” Joseph Henry said. Henry is also actively involved with helping organize the trash offs for Bailey’s.

“Someone killed a gator out there on the 4th of July weekend,” Williams added. “It was reported to the game warden. There was a big gator there the next day. We have to remember we are in their territory.”

Williams added that the back area of the park is the worse part.

“Towards the bridge, it is like someone let a trash bag out,” Williams said.

“It is like a dump truck left it,” Henry said.

“There are trash cans just 10 feet away,” Williams added.

While the first clean-up was held in May, the goal is to make Bailey’s great again by hosting two cleanups a month on the second and last Saturday of each month.

“Bridge City Mayor is a big supporter of this,” Henry said. “The county is supplying a truck and trailer for the trash offs as well as trash bags.”

Henry said two companies are ready to donate and mount 18-20 more trash receptacles at the location and the group plans to empty them at least two a day.

“We are backed by the city, county state and federal levels,” Henry said.

Everyone participating in the clean-up will be required to practice social distancing.

“There will be 10-feet distancing in area serving food and 20-feet during clean-up,” Henry said. “There will be a hand washing station,” Williams said. “We will serve boudin, links and water.”

The group will also supply grabbers and gloves. It is suggested one wears rubber boots are shoes they do not mind getting wet.

They are also looking for sponsors for signs: Do Not Litter, No Dumping Animals, and Slow Down Children at Play.