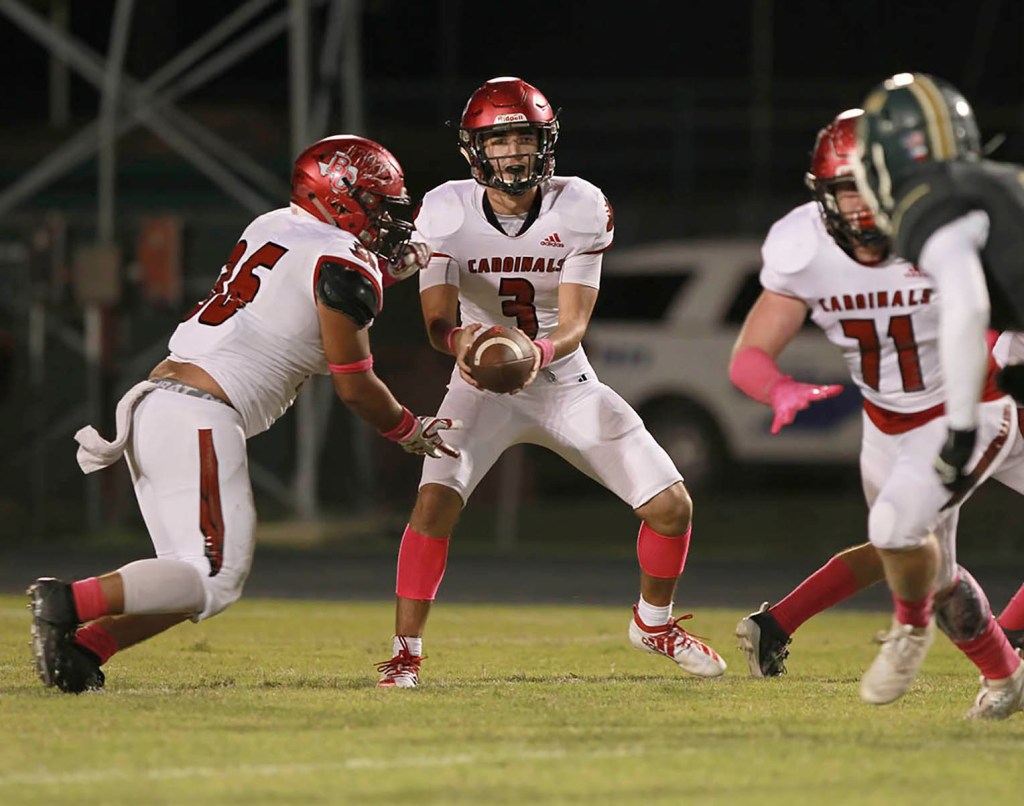 Without question, the new-look District 11-4A Division II district has the most Southeast Texas Golden Triangle area teams in it.

This season, old district rivals in the West Orange-Stark Mustangs, Silsbee Tigers, Hamshire-Fannett Longhorns, Hardin-Jefferson Hawks and Liberty Panthers will welcome in a pair of “Orange County buddies” in the forms of the Bridge City Cardinals and Orangefield Bobcats.

The Cardinals join the fray after moving down from 4A Division II while the Bobcats return to their “old” district after competing in 3A Division I the last couple years.

There is no doubt that the Mustangs have ruled the roost in their district for years now as they have captured 10 straight district crowns going into the season.

Long-time head coach Cornel Thompson has saw the Mustangs reach nine straight 4A Division III Region III Finals. And, of course, there are those four straight appearances in the 4A Division II State Championship Games (2014-2017) in which WO-S won state crowns in 2015 and 2016.

The Mustangs, after defeating Silsbee the last two years in district play en route to district titles, have come up short to those same Tigers in the Region III Finals the past two years.

Those two squads are definitely predicted to battle for the district crown again. The Mustangs have been ranked No. 3 in the state in Class 4A Division II while the Tigers chime in at No. 8.

The Mustangs return four starters on offense and six on defense from a 10-2 unit.

Offensively, the Mustangs should be sparked by quarterback Jerren Terrell and running back Elijah Gales. Terrell passed for 1,453 yards and 12 touchdowns last season while Gales zipped for 1,389 yards and 14 TDs. Veterans Demetrius Hunter and Courtney Davis will help guide a young offensive front.

The WO-S defense is led by Baylor linebacker commit Tyrone Brown, who had 1489 tackles, and stellar defensive back Jadon Jones, who had four interceptions.

The Tigers lost a lot in their offensive trenches and a pair of 1,000-yard backs as four starters return on offense but their defense will return seven from a 9-5 state semifinalist squad.

Quarterback Raymond Foster returns for his third year as a starter and passed for 1,736 yards and 17 TDs. He will have help in the backfield in Antonius Arline, who had 827 yards and 10 TDs.

The Bobcats will look to make hay against the bigger schools again. Orangefield made the playoffs four straight years in 4 (3013-17) before moving down into 3A.

Quarterback Gunner Jones will head into his third season leading the Bobcat Slot-T offense and running back Hunter Ashworth is back after zipping for nearly 500 yards. The Bobcats should be strong up front with the return of lineman Kyler Metts and Coby Coulter.

Orangefield will be young on defense and will look for the experience of defensive end Logan Gipson and linebacker Tyler Washington to give them a boost early on.

Coach Allen DeShazo will see six starters return on both offense and defense and will look towards a large junior class to help pave the way.

Quarterback Ethan Oceguera is back to power the offense. Running back Dorian Pruitt is back in the mix and the Cardinals have an excellent kicker in Oscar Carranza to help put points on the board.

Linebacker Trey Hebert brings back plenty of spunk on defense after making 80 tackles, including four sacks and 11 tackles for losses and Harrison Gauthier will also look to make an impact at linebacker.

Hamshire-Fannett returns five starters on each side of the ball after a solid 7-4 playoff season. The Longhorns lost a ton of skill talent on offense. Running back Jordan Denson is a young player that coach Mark Waggoner really likes and the return of receiver Garrett Picou will be a boost.

Liberty will return the most experience in the loop with eight starters back on offense and a whopping 10 on defense from a 3-6 squad.

The Panthers have a pair of speedy backs in the forms of Terrick Peterson, who had 853 yards and 12 TDs and Johnny Harris-Hines, who darted for 709 yards and eight TDs in the Wing-T offense.

Hardin-Jefferson made the playoffs last year despite a 1-9 record.

Coach Dwayne Dubois will welcome back six starters on each side of the ball.

When push comes to shove, the Mustangs and Tigers are definitely the front-runners of the loop as the other five teams will be chasing, looking for an upset. It could be a great battle for the top two spots once again and an even greater battle for the third and fourth-place playoff seeds.