Hope for Today: Observations about Chauvin, Floyd and Racism 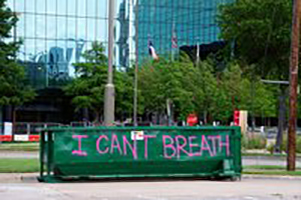 (Editor’s note: This is part one of a two part series.)

Clay Center, Kansas –Like millions of others, I watched the video of George Floyd’s death, which was a murder recorded live as it happened.  After seeing it, I have prayed to the Lord God for George’s family in the loss of a son and brother.  I have also watched the ongoing aftermath while pondering things, asking questions and trying my best to understand.

I read the Bible each day to learn more about who God is and how to live as a follower of Jesus.  One passage struck home while viewing the events of Floyd’s death.  It was found in a letter written from an older man, Paul, to his young protégé, Timothy.  He was explaining what Timothy was to expect in the days prior to Jesus’ return.  Paul wrote to him saying, “But understand this, that in the last days there will come times of difficulty.  For people will be lovers of self, lovers of money, proud, arrogant, abusive, disobedient to their parents, ungrateful, unholy, heartless, unappeasable, slanderous, without self-control, brutal, not loving good, treacherous, reckless, swollen with conceit, lovers of pleasure rather than lovers of God . . . (2 Timothy 3:1-4)”  I thought to myself, “This describes what is happening in the cities of our nation right now.”  Let me share some personal observations of the events surrounding Floyd’s death as related to Paul’s words.

The times we are living in are difficult, but the gospel of Jesus is our hope.  The darkness and evil that surrounds us is not final.  Because Jesus has risen from the dead, He is Lord and King over all that swirls around us.

A prayer for you – “Lord God, give us courage to call out evil when we see it regardless of a person’s race or position.  Guard us from judging our neighbor’s heart.  And let us be transparent about our victories and struggles with sin, that our truthfulness and our story might help others.  In Jesus’ name.  Amen.”