Stephenson looks forward to dream house and a garden in retirement 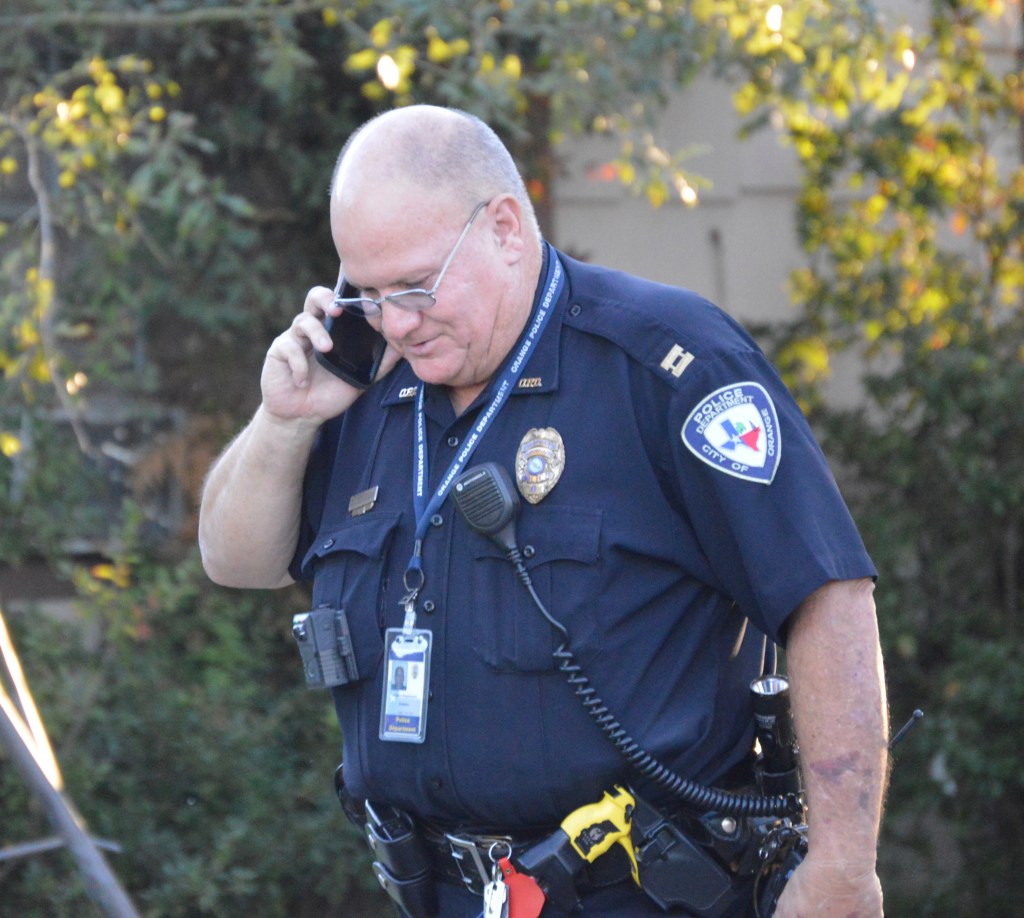 Eric Williams/Orange Leader Charles Stephenson speaks on the phone while on the scene of a call. After 38 years of serving and protecting the Orange community, he is retiring on May 31, 2020.

Having seen many changes over the years from no videos to body cams, Captain Charles Stephenson was more than a man with a badge as he patrolled the streets of Orange serving and protecting the community for 38 years. He will retire on Sunday, May 31.

Known for being a peacemaker, a man with integrity, and a man of God, Captain was a person others looked up to and inspired to be more like.

“He appreciates Life’s Characters,” his wife, Phyllis Stephenson, said. “He always said everyone needs to be heard.”

Listening to complaints was something Captain was known to do as he would defuse a situation during a call.

“He is very much a peacemaker,” Phyllis said. “He strived to preserve the peace.”

Citizens would call or text him to check on him, especially after surgery last year.

Believing everyone had the right to be redeemed, Captain would comment any one was on bad choice from throwing it all away. As such, he took the job serious as he served the city of Orange.

“He has stated that his main goal on the job besides doing his job was to get the officers who worked with him home safely to their families at the end of each shift,” Phyllis added.

Of the 30 years Senior Officer Tim Pruitt has worked at Orange Police Department, he said three quarters of those years were working under Captain.

Captain worked as a supervisor in the Detective division and also attended the FBI Academy.

The FBI National Academy is by invitation only through a nomination process. During each session, approximately 250 students take undergraduate or graduate courses in the following areas: behavioral science, forensic science, terrorism, leadership development, communications, and health and fitness, according to fbi.gov.

Pruitt added that many were not aware that Captain was a highly educated man.

“He was big on education,” Pruitt added. “It shows in his daughter who now has her Masters.”

“Us younger officers learned a lot from him,” Pruitt said. “He was highly motivating, because he was a leader. He was highly educated and a good Christian man.”

His ethics helped make him a better officer and a better man.

He not only wanted to ensure his officers returned safely home to their families, he also spoke with his crew to ensure they were alright after a particularly tough scene.

“He would talk with you and if you were having trouble dealing with it, he would get you to the people who could help,” Pruitt said.

While Captain is starting a new adventure in his life, he is not planning on sitting still.

He and his wife are planning to build their dream house and have a ‘little’ garden.

“We are going to take life slow,” Phyllis said. “He will participate more in church.”

And there the next chapter of Captain’s life will begin.