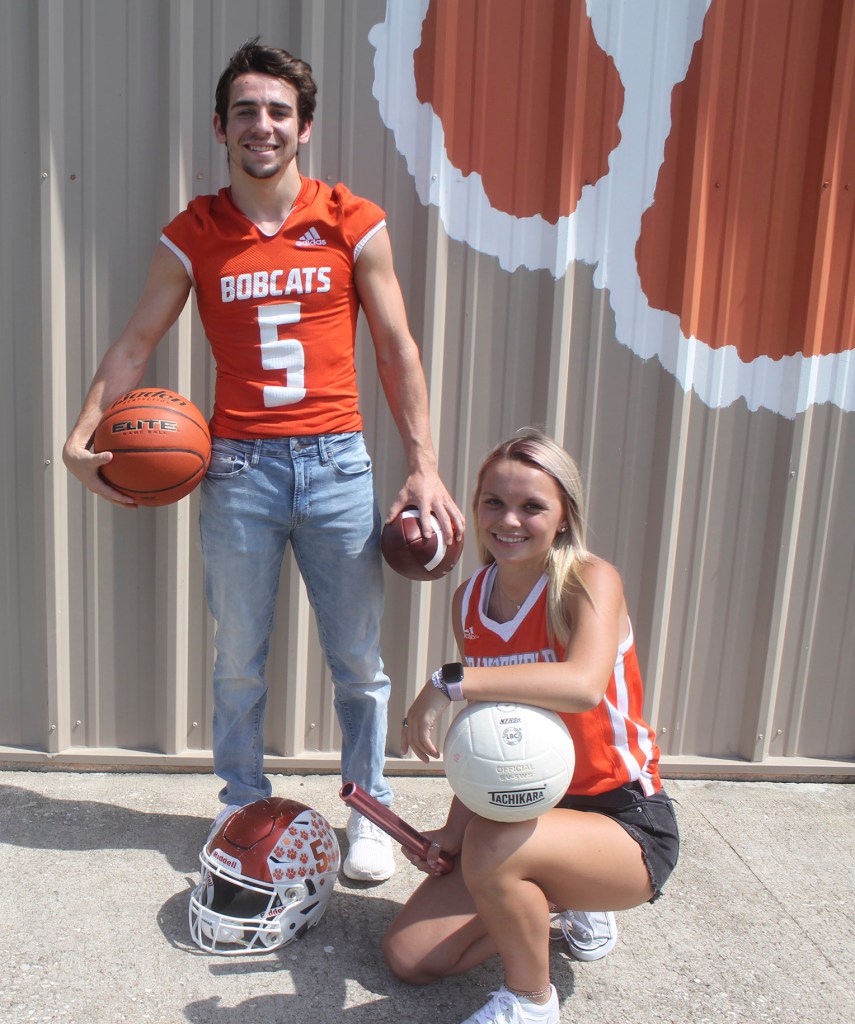 Oops, Let’s make that a Bobcat.

For four seasons representing the Orangefield Fighting Bobcats, Faith Fregia and Clayson Choate have shown plenty of grit and determination, despite their smaller statures, which not only made them stand out but helped motivate teammates to push themselves harder as well.

Fregia, the daughter of Wayne and Summer Fregia, was a major cog in the success of both the volleyball and girls basketball programs while Choate meant the same to the football unit and in boys basketball. Both also participated in track.

“I’ve never been big, I just always did the best I could to stay in shape,” said Fregia. “Being smaller, I always knew I was going to have to prove myself. When you’re small, nothing really comes natural, you have to have that ‘want to’.”

Choate, the son of Van and Josette Choate, echoed the same sentiments.

“I’ve always been pretty small and that just made me push harder to show everyone that I belonged and I always wanted to show the coaches and my teammates that they could count on me,” said Choate. “Here in Orangefield, we’ve kinda been considered the small school, compared to a lot of people we’ve played, so I felt like I fit well right here. Like in football, we may have just 20 or more guys but we went out and got physical every time we took the field. We all believed in each other and proved that everyone had everyone’s back, no matter how big or small you were.”

Fregia cranked up her four years with the varsity volleyball campaigns and she had some amazing seasons wearing the Orange and White, especially for Coach Ashlee Broussard the last three seasons.

She picked up All-District honors and All-Orange Leader Team honors during those three years. In those three seasons she compiled a whopping 891 digs to go along with 375 kills and 97 aces.

“Everyone would laugh about how I was always diving on the floor for the ball but that’s what the knee pads are for,” said Fregia. “I always challenged myself to try and dig up everything.”

The Lady Bobcats made the postseason her senior season in which she had a great time, but she relishes what the team did her junior season, in which they were just a win away from reaching the Regional Tournament.

“That was such an awesome year,” said Fregia. “We had some great wins but I think the best one was when we beat Diboll in the first round. Their coach always says we stole the trophy from them.”

While Fregia was tearing up the volleyball floors, Choate was causing headaches for opposing offenses for Coach Josh Smalley on the football field for three seasons on the varsity.

Choate turned into a key cog defensively and on special teams as a junior and then exploded with a huge senior year in which he found the end zone in so many assorted ways.

Choate, the Orange Leader Football Team’s Utility Player of the Year, piled up 80 tackles. He picked off five passes, two of them returned for scores and also forced a fumble.

On special teams he was a “nightmare” for opponents. He led the district by averaging 39 yards per kickoff return, taking three of them back for a touchdown and he also averaged 22 yards per punt return, bringing one of them to “the house.”

The Bobcats went on to have one of their best records ever, finishing 9-2.

“We were so good on defense and we were so physical,” said Choate. “It was all about a total team effort. Sure, I had a bunch of tackles, but it was those big guys up front that sacrificed so much to clear things up so the linebackers and defensive backs could make the hits.”

As far as his special teams play?

“I loved when they would keep kicking to me, kinda like, kick it to the small guy,” laughed Choate. “That just fired me up even more and I kinda felt disrespected and I was like ‘I’ll show them.’”

Choate was proud of so many big wins over the years but is most proud of the victories over Buna and Kirbyville last season.

“There is just something about the Buna-Orangefield game that gets everyone fired up,” said Choate. “It’s definitely a rival game but a friendly one I guess you can call it. I’m friends with several of those guys over there and we both play physical games. Kirbyville was awesome. It was delayed by a storm and we were down at the half. I don’t think we sat down at halftime because we were so ready to get back out there and prove that we were better. We definitely did.”

After volleyball seasons ended, Fregia turned to her “passion” of basketball.

“I just love the game and I started when I was around 4,” said Fregia. “My Uncle Bryan (Fregia) really got me involved in the game and I grew up in Little Dribblers.”

Fregia played all four years on the varsity level for head coach Jennifer Willis, making the postseason each season.

Fregia, the three-time All-Orange Leader Team Player of the Year, averaged 21 points and four steals a game as a senior.

In her four-year run she finished with a stunning 1,989 points and 297 steals.

She was never afraid to pull up and hit her patented three-point bomb and was quick to swipe the ball and go in for her well-known, hard-running layups.
“We had a great run and I had such a blast with all my teammates and coaches,” said Fregia. “We were like a family, always together as much as we could be. This year was so much fun because it was our last. We made it three rounds and that was really good.”

Fregia was never intimidated by being one of the smallest on the court.

“I remember one time Coach Willis told me to go guard a six-foot girl from Silsbee and I got in there and battled and did my best,” said Fregia. “The next practice Coach Willis lined us up and said I was the tallest one out there, that made me feel so awesome. That’s the great thing about playing at Orangefield, when you played us, you knew you were playing a team that was going to give 100 percent.”

Choate made his return to the hoop gyms after each football season and continued to be a “pest” on the court as opponents were literally thinking they were playing the “Energizer Bunny.”

“I love playing basketball and I’ll admit, I have never been a great shooter,” said Choate. “I was the type of player that always wanted to get his teammates a great shot or go in their against some of the big guys and get a rebound that would fire us up.”

Choate filled up the stat sheet his senior year for Coach Jake McDonald, averaging four points, five assists, six rebounds and five steals a game. Like football, he was lauded for his hip-checking defense on opposing point guards.

One legendary Southeast Texas coach East Chambers’ Todd Sutherland has this to say, “That Choate kid is a nuisance and I mean that in a very positive way, he brings so much energy to the table.”

Choate was a part of three playoff teams and was certainly fond of his junior season when the Bobcats won a school-record 29 games to advance to the third round of the playoffs.

“We had a great team my junior year and I just wanted to contribute anyway I could and that was on defense, because we had great shooters and big Val (Catt) inside,” said Choate. “We had a great time and we just kept improving and improving. It was a great run for sure.”

Fregia and Choate, good friends, are not exactly wrapping up their senior years the way they wanted to with the COVID-19 situation, which included missing most of the track season, but both will take great memories with them about their high school and it’s fighting spirit.

“Orangefield will always be special to me because this school has a bond like no other, we’re like a tight-knit family,” said Fregia. “I will always remember the great times like dancing in the dressing rooms, singing on the bus rides and getting some big wins. I know I have friends for life.”

“My teammates, my classmates, they are always going to be like my second family,” said Choate. “What’s been tough lately with everything that has been going on is missing my friends. I would have loved to have finished the year with them all. I’m definitely going to miss those Friday Night Lights, I would do anything to be able to run out there one more time and play another game.”