Tattoo shops and more to reopen in Phase II 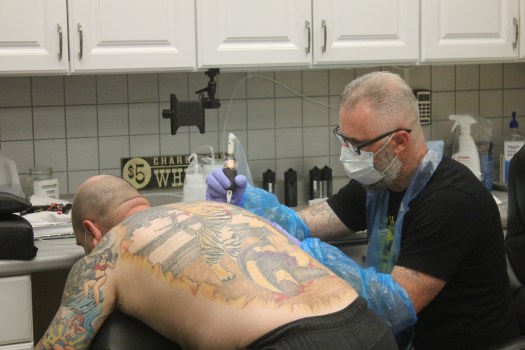 AUSTIN – Governor Greg Abbott, on Monday, announced the second phase of the State of Texas’ ongoing plan to safely and strategically open Texas while minimizing the spread of COVID-19.

“Today, tomorrow, and every day going forward is one step closer to medical discoveries that can treat and protect people from COVID-19—but until that day comes, our focus is keeping Texans safe while restoring their ability to get back to work, open their businesses, pay their bills, and put food on their tables,” said Governor Abbott. “By continuing to use safe practices, we are slowing the spread of COVID-19 and protecting our most vulnerable. Now more than ever, we need to work together as one Texas. I ask all Texans to continue heeding the guidance of our state and federal medical experts and do their part to protect public health. If we all unite in our resolve, we will overcome this challenge.”

Under Phase II, restaurants may increase their occupancy to 50% and additional services and activities that remained closed under Phase I may open with restricted occupancy levels and minimum standard health protocols laid out by the Texas Department of State Health Services (DSHS).

Additionally, the Governor announced that public schools in Texas have the option to provide in-person summer school so long as they follow social distancing practices and health protocols laid out by DSHS. These classes may begin as soon as June 1, 2020.

Via Executive Order, the following services and activities may open under Phase II.

Massage and Personal-Care Centers (May 18)

Rodeo and Equestrian Events (May 22)

Aquariums and Natural Caverns (May 22)

Not mentioned in the press conference but in the Executive Order was tattoo shops.

“This is a weight off my shoulders,” Flipper, owner of Flipper’s Skin Flix and Piercings, said. “WE have to follow the rules and that is fine.”

He plans to reopen on Wednesday after going through all the paperwork to ensure he can make the new guidelines clear to his clients. Randall “Flipper” Doolittle of Flipper’s Skin Flix Tattoo and Ryan Green of All About Art Tattoo wrote the paper entitled “COVID Tattoo Standards” which was submitted to Texas Governor Gregg Abbott.

The purppose of the writing was to bring awareness to the high standards already in place in tattoo shops as well as how they could help prevent the spread of the cornoavirus if allowed to reopen.

All sporting and camp activities are required to adhere by special safety standards, and minimum standard health protocols have been established for all newly-announced opened services and activities. Businesses located in office buildings may also open but must limit their occupancy to the greater of 10 employees or 25% of their workforce.

For restaurants, effective Friday, “the occupancy limitation increases to 50% of the total listed occupancy inside the restaurant,” according to an updated checklist on the state website https://gov.texas.gov/organization/opentexas. Though the website crashed during Abbott’s news briefing, it has detailed lists of various categories of businesses.

Opened services and activities under Phase II are subject to certain occupancy limits and health and safety protocols. For details and a full list of guidelines, openings, and relevant dates, visit www.gov.texas.gov/opentexas.

Certain counties experiencing surges in COVID-19 cases will have their beginning date of Phase II delayed until May 29. These counties include El Paso, Randall, Potter, Moore, and Deaf Smith. Surge Response Teams are actively working in these areas to increase testing, maintain hospital capacity, and ensure that COVID-19 is contained and mitigated.

During his remarks, the Governor also presented information on the state’s hospitalization and positivity rates—two metrics the Governor and his team of medical experts have used to inform the state’s ongoing plan to safely and strategically open.

He says they are “based on the advice of the best medical doctors, as well as a team of outstanding business leaders.”

He said he’s carefully watching hospitalization rates and the percentage of people who are tested and found to be positive. He sat beside a poster showing these metrics, which can be found in here and here.

When asked about theme parks such as Schlitterbahn, Six Flags and Sea World, Abbott said he’s tracking decisions by Disney and assessing strategies that would allow such tourist attractions to reopen.

“However, there are unique challenges in making sure that they can open in ways that contain COVID-19,” he said. “Just know that some of the best professionals in America and the world are working on those strategies as we speak.”

Abbott was asked if the Department of State Health Services has lumped together results of COVID-19 diagnostic tests with those from antibody tests, and if so, whether that would impair Texans’ confidence in the state’s data on prevalence of the virus. “The answer is no,” he replied. “They’re not commingling those numbers. Those numbers will be provided separately.”

The Texas Education Agency has issued further guidance for school districts on safe in-person summer school, including keeping groups to 11 or smaller. The governor also said he would permit restaurants to operate at 50% capacity starting Friday, up from 25%.

In explaining his cautious optimism about Texas’ response to the novel coronavirus, Abbott has often homed in on the number of Texans he says have recovered from the virus, which, he boasts, tops that of almost every other state. But some states don’t report how many patients have recovered because it simply isn’t feasible to track everyone who tested positive for the virus. There are also too many conflicting methods for estimating the count. Experts say recovery estimates mean little because there is no cure for the new coronavirus, so the number of recoveries best reflects how many people have fallen ill from the virus in a given state — the more infections, the more recoveries.

“We’ve seen no evidence, no signs that raise any concerns about the possibility of retrenchment in Texas,” he said.

Asked if every Texan who is positive for COVID-19 is being traced and if not, when he expects the state and its various local and university partners to be able to do that, Abbott deferred to Hellerstedt. 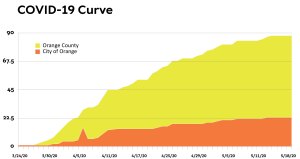 “We are ramping that up as fast as we can but it’s a fact that we are not able at this point to do tracing on every single positive case,” Hellerstedt replied.

“We eventually believe we will need a workforce of somewhere around 4,000 [tracers] in order to do that,” he said. “And then in addition to that, we have essentially a web-based application that’s going to cover the entire state and enable coordination of the case tracing across the entire state. And that’s still being developed. It’s being developed at a very fast rate.”

Abbott, asked if the state is making efforts to help Texans who have lost their jobs because of the pandemic, noted that the Dallas Federal Reserve has said Texas has the lowest unemployment rate “of any of the largest states” in the country. But “unemployment numbers are too high and unacceptable,” he said.

“What we intend to do to lower the unemployment rate … is to continue this process of opening up Texas,” Abbott said. He urged all Texans to help businesses be able to reopen by following social distancing and hand sanitation practices.

Congress has provided certain benefits during the coronavirus emergency, such as Pandemic Electronic Benefit Transfer to replace school meals and money for health care providers to provide free testing, that noncitizens can obtain. Even though Congress specified there should be no “public charge” consequences or exposure to immigration enforcement, according to news reports, some undocumented immigrant parents are too fearful of deportation to apply. Abbott was asked if the state should do more to educate Texas residents, such as through public service announcements, that the benefits exist.

Asked about people in parks or bike lanes who are not wearing masks or maintaining social distancing, and whether he’d tell them to balance freedom with being respectful of others, Abbott warned the question contains assumptions.

“You need to make sure you’re not jumping to conclusions,” he said. “Some of the people who may not be distancing, that could be family members. And family members don’t need to distance themselves from others because they congregate within a family all the time anyway.”

Abbott, saying he was speaking for officials who were at the briefing, such as Lt. Gov. Dan Patrick, Speaker Dennis Bonnen and Strike Force to Open Texas Chairman James Huffines, called safe distancing a must.

“Every day, I and everybody else with me, we strongly urge all Texans to continue safe distancing practices, to wear face masks if at all possible, to sanitize your hands. Do everything you possibly can to continue to slow the spread. If you do that, there will be more opportunities to open up the state even more.”

Texas is considered one of the top 10 states most open for business, ranking 10 according to according to zippia.com.