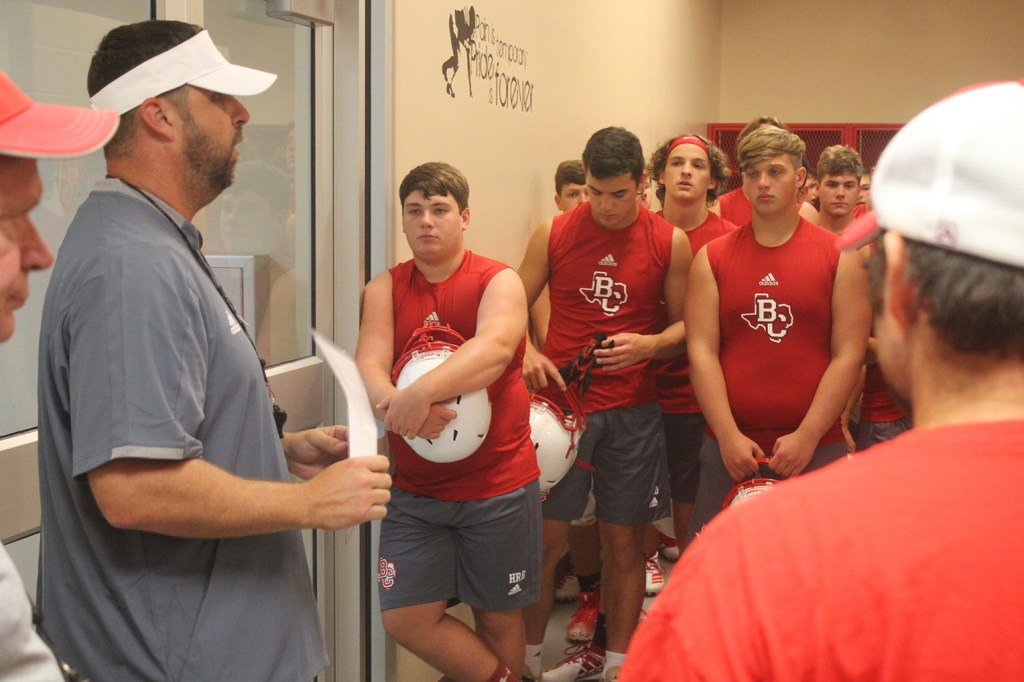 BRIDGE CITY – While the athletes of Class of 2020 is getting to prepare for makeshift graduation ceremonies, all of the underclassmen, including the seniors-to-be of 2021 are patiently waiting to see how they will have to deal with the near future during the COVID-19 pandemic.

A lot of the athletes are doing the best they can to stay in the best shape they can through all of this, but of course, it’s just not the same.

So many missed the opportunity with their teammates and coaches during the routine spring offseason.

“It’s been such a tough ordeal and we really feel for the kids,” said Bridge City Athletic Director and head football coach Allen DeShazo. “Offseason is such an important thing for everyone in every sport. Kids constantly need to stay in great shape and in condition and missing spring was a big setback. The saddest thing is that everyone else is in the same boat.”

Like the rest of the coaches across the state, DeShazo patiently waits in limbo to see what the University Interscholastic League is going to do with possible new summer plans ahead.

“I think we could get a better understanding this week of what could possibly happen down the road,” said DeShazo. “We know that the UIL is awaiting more decisions by the state government and Governor Abbott.”

Last year, for the first time, the UIL allowed football teams to get in a little extra work time as players were able to work with their coaches on workout plans and their position-type drills a couple times a week. DeShazo feels that the UIL could be even more lenient this summer with what has been going on with the coronavirus.

“We really think that the UIL will make some changes that will be able to benefit everyone,” said DeShazo. “I think we could see some of their normal restrictions be lifted, allowing kids and the coaches the scenarios of making up for as much time that was missed. It could be really challenging but believe me, coaches everywhere have come up with so many different plans, basing it on things that could or could not happen.”

DeShazo and the Cardinal coaching staff have been keeping up with the kids as best as they possibly can.

“We’ve been communicating with the kids, giving them workout plans and most importantly, just checking on them and seeing how they are doing overall,” said DeShazo. “We miss them all so much and we understand how much of their daily routine has been interrupted. As coaches, we are slowly starting to see the staff again since the school allowed staff to come back last week a couple days out of the week. We’re not all in the same rooms at the same time but at least we’re able to communicate more.”

DeShazo certainly feels for the Cardinal Senior Class of 2020, especially for the Cardinal baseball team that was 15-0-1 and ranked No. 1 in the state when the virus began disrupting everything.

“I certainly feel for the baseball kids because that team was built to go a long way, plus all of our spring teams were really doing well,” said DeShazo. “We have such a great overall senior class. It’s just so tough, they are about to go into the real world and already they are thrust into a real-world situation.”

The Bridge City district has done its very best to create lasting memories for the Class of 2020 and the big thing this week is a Grad Processional, which will be this Friday starting at 8:30 p.m. The route will start at First Baptist Church on Roundbunch and it will go down Texas Avenue to the high school. Bridge City has planned graduation night for June 20 at Larry Ward Stadium.

“It’s awesome to see what is taking place in trying to make everything as special as possible for the kids,” said DeShazo. “They have given so much to all of us as a faculty and staff. They really have gotten a raw deal. Anything we can do to celebrate them, they certainly deserve it.”

DeShazo is anxious to get the ball rolling as soon as more information comes out from the UIL.

“I know we could possibly be doing things way different then we’ve had in the past and I totally understand that because keeping people safe is the top priority,” said DeShazo. “I just miss sports so much and I know everyone else is too. I’m ready for some football, I’m actually ready for those hot summer practices and being with all of the kids again. Hopefully everything will work out for the best. We’ll just have to wait and see.”