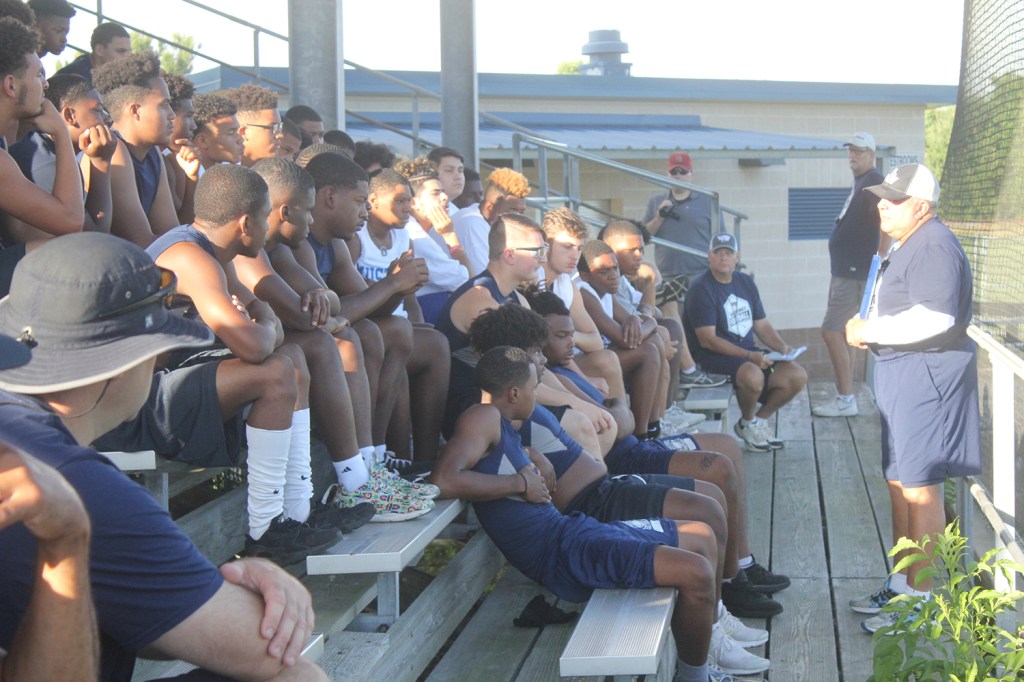 WEST ORANGE – It’s been a strange offseason for sure for Southeast Texas football teams.

After all, their spring conditioning has had a “tough go” due to the COVID-19 virus.

Spring is usually when they hit the weight rooms, burn calories on the track and then they carry that over into the summer.

Arguably, what has made the West Orange-Stark football program one of the best in Texas has been the Mustangs’ work ethic throughout the spring and summer.

The school is the owner of four state titles and eight trips to the big game.

Currently, the Mustangs have captured nine straight district titles and have advanced to at least the 4A Region III Division II Regional Finals nine straight years.

To say the least, Mustang players and head coach Cornel Thompson have been chomping at the bit to go back to normal, however, everyone continues to play the waiting game.

“It’s been an ordeal for sure,” said Thompson. “We, as a staff, have definitely missed the kids and I know they miss being here. I don’t know what the new normal is going to be, but it is going to be different for sure.”

For years and years the Mustangs have tried their best to get a step ahead of their competition with their offseason program. Now things will become much more interesting.

“The playing field is being leveled this year and we’ve been telling that to the kids,” said Thompson. “We have given them workout plans to help them stay as active as possible. Many have gotten jobs throughout this, which is good. I’ve been able to go through a few of those places and honk at the kids. Many of them are working out in garages and a lot of them have been getting together and throwing the ball around.”

Now, Thompson is awaiting decisions by the University Interscholastic League as far as summer workouts will go down the line.

“We’re anticipating what the UIL might let us do here pretty soon,” said Thompson. “We’re curious to see if we will be allowed to make up for as much of this missed time as we possibly can.”

Thompson feels the Mustangs will respond positively to what ever the new situations could be.

“We really like the makeup of the team we have coming back,” said Thompson. “We were such a young team last year. We have about 20 kids back that got a lot of experience and they know what it is about now. For the most part, no matter what, most of them will come back in shape.”

But still, Thompson worries about what could happen.

“What would be great would be able to get those 90-minute workouts during the summer,” said Thompson. “It worries me to death about those that are not in shape, especially the big boys, especially out in this Texas heat. I’ve talked with several coaches about this and it really scares us.”

Thompson has certainly missed being around the kids and coaches.

“Everyone is missing everyone, from people not being able to see members of their family during all of this, and it’s been tough,” said Thompson.

“We check on the players as much as possible and coaches have been in contact quite a bit, especially by utilizing Zoom meetings on the computer. That’s always scary when Coach Thompson is using computer technology,” laughed Thompson.

Meanwhile, Thompson has been busy at his home, tending to his cattle and working on several projects.

“I’ve been able to get a lot done around the house and the land, but this manual labor is about to eat me up,” laughed Thompson.

It’s been a tough school year in several ways for the Mustang athletic program. The football program only got to play on their new turf field three times as two other home games were negated due to weather.

In baseball and softball both the Mustangs and Lady Mustangs each were able to host tournaments on their new turf fields only to see COVID-19 wipe out the rest of their seasons.

“I really feel for everyone in the Class of 2020, especially the spring kids who saw their seasons cut short,” said Thompson. “It would be great to be able to see them graduate at the stadium with their family and friends just like a normal graduation. That would be awesome, we’ll just have to wait and see. You only get to graduate once and with what they have been through, they definitely deserve it.”