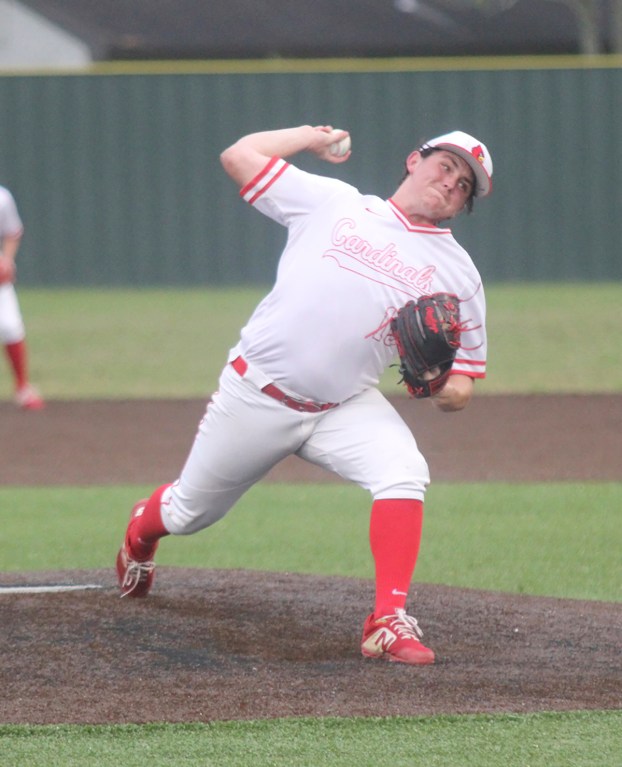 Van Wade/Orange Leader Bridge City senior Peyton Havard will take his talents to University of Louisiana-Lafayette but will always wonder what could have been during his senior year as a Cardinal.

BRIDGE CITY – For Peyton Havard, the sky is the limit for the Bridge City senior.

After all, he will continue the game he has loved for so many years as the Cardinal ace pitcher signed to play collegiate baseball for the University of Louisiana-Lafayette.

He recognizes that too, but it just isn’t going to be the same as he winds down his last few days as a Bridge City student.

The dreaded COVID-19 pandemic helped erase a lot of what Havard and his teammates had set goals for.

The Cardinals were sitting “perched pretty” as Class 4A’s No. 1-ranked team with a record of 15-0-1 right before the pandemic shut things down right before District 22-4A was about to begin.

“A lot of us were upset about it but we also realized that there was nothing we could do about it,” said Havard, who was the Baseball Player of the Year on the All-Orange Leader Team the past two years. “There were so many more upsetting things, especially with the virus, and there was so many unsure things that we would hear and we became more concerned about our families and such.”

There is no doubt, Havard had a tremendous run in a “Big Red” uniform.

Havard was looking forward to how far this year’s version of the Cardinals could go, especially with 11 seniors on the roster.

“It was absolutely ridiculous how much talent we had,” said Havard. “We literally could go five or six-deep with our pitching staff and our lineup, one through nine, was really special. We were so focused on our goals. We had guys that wanted it so bad that had played together for four straight years. We were confident, but not cocky. We had a good run the last three years, but we circled this year, we knew this was going to be our year, that’s what makes it so tough.”

Not only has it been tough on the players, Havard feels for the Cardinal coaching staff, especially Coach Landry.

“”Coach Landry inspired us to be the best we could be and that was not only on the baseball field but in life as general,” said Havard. “I’m not afraid to say it, Coach Landry is the best coach in the area. His knowledge of the game is unmatched. He builds tremendous relationships with all of his players and we love him for that. We just wish we could have took him to the promise land this year because we really had a great shot.”

Havard and all of his teammates got a little emotional a little more than a week ago when Landry conducted a Senior Night for his players at the stadium. Chuck Young Field was lit up, along with the scoreboard and Landry announced each seniors’ names with accolades from the public address system.

He’s so awesome because we knew he didn’t have to do that, but that is what kind of man he is,” said Havard. “It was great to see the lights on again, it made us all want to get out on that field one more time. We almost made it through it, but Coach got us at the end. At the end of every game, we always listen to the song ‘The Show Must Go On.’ Coach played that again and I think we all lost it.”

Now Havard and his fellow Class of 2020 classmates will await graduation, which is tentatively set for June 20 at Larry Ward Stadium.

“We’re all definitely looking forward too it, after all, graduating from high school only happens once in a lifetime,” said Havard.

Though he will be heading to Lafayette in the future, his memory as a Cardinal will live on forever.

“I don’t consider my teammates as friends, I consider them my family and we will have memories that will last a lifetime, along with friendships,” said Havard. “That just doesn’t go for the seniors, but a lot of underclassmen as well.”

Havard’s competitive nature will continue to thrive as he thinks about what lies ahead.

“I’m definitely looking forward to getting to Lafayette and competing for a spot on the mound,” said Havard. “But what I would give to have some more opportunities to represent my high school and my teammates. That’s still tough when you think about it, but then you start thinking about all of the great times, that’s what matters the most.”