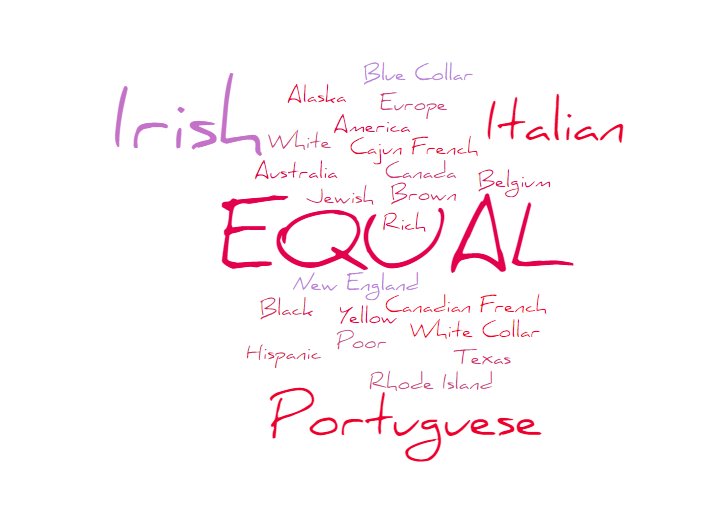 Some of my earlier opinion pieces may have given you a few ideas about how I think. Maybe some of you have even developed a mental image of me. Let me give you a few more tidbits about me as a person, and then identify one of my hot-buttons for you to ponder.

I live in Texas, but I’m from New England. In between, I have lived in Europe and Canada. I have worked or visited all 50 states and 49 countries. I was born in Rhode Island, the smallest state; and I’ll die in Texas, the largest state (or will be when global warming melts the ice in Alaska).

Both of my grandfathers were of French Canadian descent (Canucks). My maternal grandmother immigrated from Salt Hill, a small town next to Galway in Ireland. I never knew my dad’s mother, nor was she spoken of.

My wife’s mother was a Cajun. The Cajun French came from Nova Scotia (means “New Scotland”) in the late 1700s when they were deported by the British. Most ended up in Louisiana. In contrast, the Canuck French migrated from La Nouvelle France (primarily today’s Quebec) to New England for economic reasons.

My wife’s dad was from a Danish family living in Birmingham.  I remember meeting her dad’s mother there once, she was a true “Southern Lady”. Once, while in Denmark, I looked up her family name in the phone book…and there were three pages of them.

I grew up in Rhode Island. Most of my friends were either Italian or Portuguese. When I say that, I mean that’s the language that their parents spoke – as immigrants.

Most of the Italians came from Sicily, in the south. The Casa Nostra (Mafia) was an integral part of the Rhode Island culture. The Portuguese came from the Azores off the coast of Africa (“Black Portuguese) or from the mainland (White Portuguese).

Immigrants tended to live in their own ethnic communities. Even today, many parts of New England have their ethnic equivalents of Boston’s Italian North End or the South Boston Irish.

So, here I was, growing up through high school with a French-Canadian name and strong Irish heritage, living alongside Italians and Portuguese.

Did I learn new, non-English, words and expressions? Yes. Did I learn to make judgements about people because of their heritage? Yes. Is that natural to do? Yes. For example, to this day I still associate Italian with the Mafia. I still associate being Irish with beer and hot tempers (and maybe red hair).

After high school I went away to college, Boston College in Chestnut Hill, about 40 miles from home. Ever heard of BC? It’s probably the 2nd best known Irish Catholic university in the US, following Notre Dame. It’s run by the Jesuits and sits smack dab in the middle of a well-established Jewish area of Boston. I learned a lot more non-English words and sayings from our Jewish neighbors.

Throughout my early years, ethnic influences have permeated my life. I’ll bet they have yours too.

Did I make ethnic judgements? Yes. Do I think those judgements are still valid today? Some.

A while back I wrote about hypocrisy in the anti-discrimination rules in this country. In that article I defined a few words for clarification of my thoughts:

Sticking just to ethnic judgements for the time being, let me tell you how my early life relates to these four words.

STEREOTYPES: Yes, I have cultivated ethnic stereotypes, I’ve already talked about some of these, like the Italians and the Irish.

PREJUDICE: This is prejudging a group based on stereotypes. Yup, I have a tendency to still do that on occasion.

RACISM: No, I do not look at ethnic groups as being superior or inferior to others. After decades of international business and living, in order to be successful, one had to live by, “It’s not better or worse, It’s different.”

DISCRIMINATION: No, I do not discriminate against groups. Yes, I DO discriminate between individuals, based on my knowledge of them. I suppose you could say I put people into groupings such as friends, acquaintances, not-friends, and unknowns; and I discriminate by treating them accordingly.

I have two good friends named Debra. Both are women. One is black and one is white. One is active in the public community, the other is not. One is white collar; one is blue collar. They each have lots of differing attributes.

When I think about either of them, I think of her as an individual, as a friend. I do not think of her as a black friend or a blue-collar friend, or any other of her attributes. And, just for the record, I use the word “her” out of respect for her gender, not as a sexist thing.

I’m so sick and tired of all the polarizing that is going on today, especially how easy it is to refer to enemies as being racist – in what I hear (broadcast as well as discussions), in what I read (newspapers and the internet), and in what I see happening especially in the government.  Just last month, five Democrat lawmakers even accused the COVID-19 virus of being racist.

Anyone out there have any ideas on how get the rhetoric down to what’s right? And stop blaming the “other side” for what’s wrong? There is no reason to have winners and losers.

Throw the race-card out and let’s all just treat people as individuals, as equals, and search for win-win solutions instead of trying to pick winners and losers based on ethnicity.