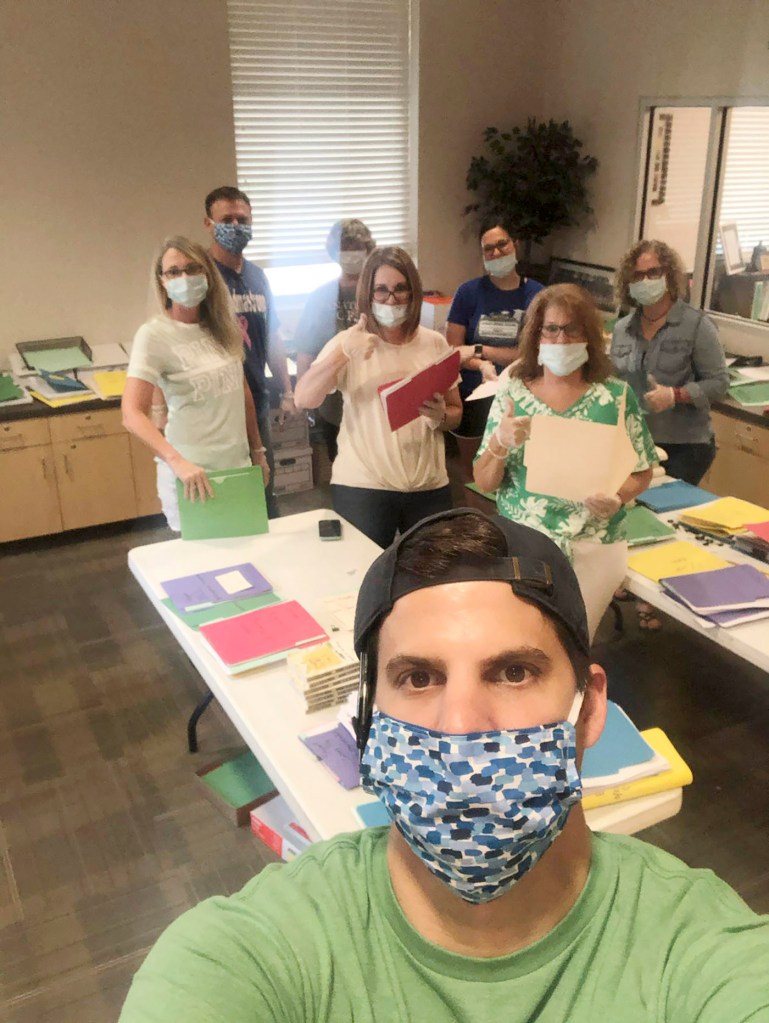 LITTLE CYPRESS – Whenever you see Little Cypress-Mauriceville High School Principal Ryan DuBose out and about, whether if it is in the hallways of the school or a big basketball game in the gym, he is always there with a smile, supporting the students of the LC-M district.

He has also brought so many positive vibes with his daily morning announcements at school each day that have always had a “Joke of The Day” mixed in with them.

With schools being closed now to the COVID-19 pandemic, DuBose has found other options to get his point across.

He has started to post them on Twitter with a daily video, something students have enjoyed since they are no longer physically at school.

“Everyone has been so stressed in the last month or so and I felt by doing this it would help to create some type of normalcy because the kids have grown accustomed to it at school each day,” said DuBose. “Everyone can use a little humor during stressful times.”

DuBose has been spreading his jokes and cheers now for years.

“It goes all the way back to my coaching and teaching days when I would have a Joke of the Day on the blackboards in class,” said DuBose. “It carried over to when I was principal at the junior high when I did the announcements and now to the high school. Poor kids, some of them have been hearing my jokes for years.”

Just when he thinks he is going to fall short of material, someone always steps up and helps.

“I get jokes from teachers, my wife, my mom and students,” said DuBose. “I like to do the ones from the students because I always give them the recognition.”

DuBose is always energetic when talking about the students.

“I’m not the type of person that likes to sit in an office all day, I love to be out and about,” said DuBose. “I love getting to know all of our students and see how they are doing and what they are involved in. I want them all to know that I care deeply about them and that I have their best interest in my heart.”

LC-M students were on Spring Break last week and DuBose is so proud of how the district has responded to the coronavirus, despite the kids not being in school.

“In general, our staff has responded so tremendously during all of this and getting kids their assignments and getting the grades out,” said DuBose. “Through technology our teachers have been awesome in getting assignments to students and chatting with them as well. You would think maybe the kids would not respond to this style but the students have been terrific, it’s like they picked up right where they left off.”

During this, DuBose certainly misses so many things.

“I miss the kids and the staff and all of those smiles you are used too each day,” said DuBose. “This social distance thing has really be a tough ordeal for me because I’m a person that doesn’t like to stand still. It’s been a major adjustment for everybody, especially for me, because I tend to be a little hyper.”

DuBose is just hoping things can return to normal sooner than later.

“We had so many positive things going for us before all of this went down,” said DuBose. “In sports, our baseball and softball teams were flourishing and our girls soccer team, I think, was ranked No. 9 in the state. We’ve had great One-Act plays in the past but I think this year’s was so special as they were getting ready to compete in the UIL. I feel for the seniors the most but right now it is just a wait-and-see type of deal.”

DuBose would love to see the Class of 2020 graduate and have a nice ceremony.

“We have been holding graduation at Lamar University in Beaumont but Lamar University has closed their doors to the public for the summer,” said DuBose. “I’ve been talking with other Orange County principals, working on ideas. We all want our kids to have a ceremony and we plan to come up with something to make it work.”

DuBose is prepared to hit the ground running again Monday as he will continue to be a part of helping LC-M students thrive while getting their “laugh on.”

“Even though everyone may be feeling stressful right now, we will get through this,” said DuBose. “We all just need to focus on each day with positivity and go from there and if I can start it off by making someone laugh, that’s awesome.”