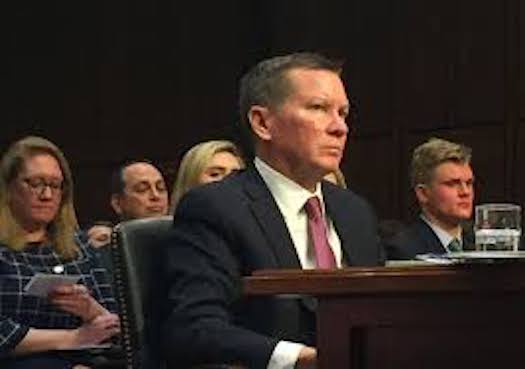 Photo courtesy of dni.gov An advocacy group dedicated to protecting government whistleblowers says the firing of Inspector General Michael Atkinson by President Donald Trump without evidence that he acted improperly is a "crushing blow to public trust."

AUSTIN, Texas — A whistleblower protection group is urging Congress to exercise its oversight responsibility to stop the termination of a central figure in President Donald Trump’s impeachment.

On Friday, the president fired Michael Atkinson, the inspector general for the intelligence community. It was Atkinson who forwarded to Congress a whistleblower’s complaint that initiated impeachment proceedings.

John Kostyack, executive director of the National Whistleblower Center, said retaliation against whistleblowers by the administration creates a hostile environment and damages the country’s system of checks and balances.

“It’s a very chilling message not just for those people but for all of us who believe in the rule of law and believe that oversight of the executive branch is pretty fundamental to make our democracy work,” Kostyack said.

The whistleblower advocacy group has mounted a campaign encouraging Congress to reverse the inspector general’s firing. Kostyack said he believes Atkinson was following the rule of law when he forwarded the complaint revealing Trump had asked the Ukrainian president to investigate Democratic presidential candidate Joe Biden and his son Hunter.

Several top Democrats have criticized the firing of Atkinson, and Republican Sen. Chuck Grassley argued that Congress has been “crystal clear that written reasons must be given when an inspector general is removed for a lack of confidence.”

Kostyack said it is in the institutional interests of Congress to say “no” when the president undercuts a system designed to help them perform their oversight function.

“They have the power of the purse. They have the power to block nominations. All of those steps are what Congress typically does when there’s a test of wills between the executive and the legislative branch,” he said. “And if there ever was a time for them to pull out those tools, this is it.”

Trump was criticized last year for retweeting a post that revealed a name supposedly belonging to the whistleblower involved in the Ukraine investigation. The 1998 Whistleblower Protection Act was written to protect whistleblowers but does not prevent the president or members of Congress from identifying them.

Postponed due to COVID-19