Red-hot Cardinals, Lady Cats await as season remains up in the air 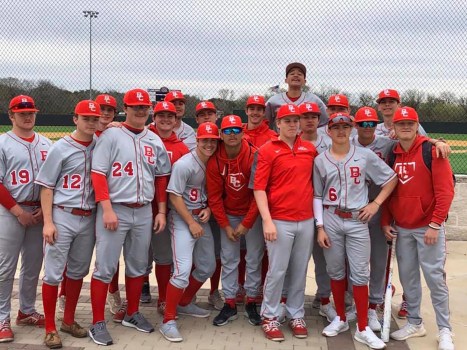 Courtesy Photo The Bridge City Cardinals were off to a red-hot 15-0-1 start and are ranked No. 1 in the state in Class 4A.

Wouldn’t it be so nice to hear the crack of the bat, the fastball hitting the catcher’s mitt with some pop and baseball and softball fans cheering for their kids and favorite teams?

That is certainly the case across the Southeast Texas area as the coronavirus has interrupted so many plans and dreams for athletes across the area in spring sports such as baseball, softball, track, golf, tennis and soccer.

The University Interscholastic League extended its suspension of all UIL sanctioned activities due to the outbreak of COVID-19 in Texas.

All contests, practices, rehearsals and workouts will remain suspended until further notice.

At this time, the earliest games and contests may resume is Monday, May 4. Prior to this date, the UIL will allow its member schools a reasonable acclimatization period for practices to occur. All decisions remain flexible and will be consistent with the advice of local, state and federal offices.

This has had such a major impact across the boards for all the players and coaches.

Two teams, the Bridge City baseball team and the Orangefield softball team – were really rolling before things were called off almost two weeks ago.

Both squads had so much momentum going.

The Cardinal baseball team, led by long-time coach Chad Landry, was really humming along as they have another possible District 22-4A title on their minds as well as a deep trip into the postseason.

“We were playing so well and we knew we had something special going into the season,” said Landry. “I really feel for the kids, especially our seniors because they have worked so hard. We have 11 seniors that have really made their mark for four seasons and it’s a tough, tough deal right now.”

The whole ordeal is tough on everyone.

“It’s hard on us as coaches and teachers too,” said Landry. “We miss seeing those faces at school every day. The kids, they are missing their friends and that normalcy of seeing one another at school during the week. It’s a tough adjustment and a lot of boredom for sure.”

The Cardinals (15-0-1), sparked by a tremendous senior class, went through non-district without a loss with the only slight snafu, if you want to call it that, a 4-4 tie against Nederland in the Bridge City Tournament.

The Cardinals played a tough non-district schedule and came away unscathed and went undefeated in tough Cameron Yoe and Jasper Tournaments.

Bridge City is currently ranked No. 1 in the state in Class 4A by Texas High School Baseball.

“We played some good teams early on and we always like to do that to test ourselves,” said Landry. “We were able to face four or five Division I arms and saw a lot of teams’ best throughout non-district. We were ready to go when district started and then everything stopped.”

There is still hope and anticipation for the season to resume May 4 and it will be curious to see what kind of format the UIL could set up.

“Who knows, there could be so many things that could happen,” said Landry. “Maybe we would play just one half of district play. Maybe there will be a double-elimination type of district tournament. Maybe they will shorten the playoffs. It’s a wait-and-see game right now.”

The Cardinals had a lot of momentum on their side before the games were called off but he doesn’t feel the loss of that will hamper the Cardinals.

“Our guys know what it is about and love the game, they will be ready,” said Landry. “They are hungry for some more baseball, we all are.”

The Lady Bobcats, led by coach Rebekah Ragsdale, have been devouring foes throughout non-district play as well, going 19-2 and started 22-3A play 2-0.

“We were playing so well and we were ready to make a strong push in district and in the playoffs,” said Ragsdale. “We were a young and successful team last year so the kids definitely had high goals going into this year. They get along so good together as a group on an off the field and they went about their business in a fluid way.”

They were champions of both the Galveston Ball Tournament and West Orange-Stark Tournament. They opened District 22-3A play with a 14-1 win over Buna and a 21-0 thrashing of Anahuac.

“We got off to a great start and had great chemistry,” said Ragsdale. “The Galveston trip was great and they made a lot of memories there and that made them bond together even more and then we were rolling in district and it all came to a stop.”

The Lady Bobcats are currently ranked No. 9 in the state in Class 3A by the Texas High School Girls Coaches Association.

Right now, it’s all about staying in good condition and checking on each other via texts and social media.

“We’ve given them workout ideas and other things to help them stay busy throughout their days and make sure they are all doing okay,” said Ragsdale. “It’s tough for them because they miss each other so much, not just on the field but seeing each other during school, it’s such a big adjustment.”

Now it is just a “wait and see game.”

“We just hope to be able to take the field again and play ball,” said Ragsdale. “I’ve been coaching for four years and these kids are my first group that I was ready to see all the way through and this makes me sad. They are a part of our lives and you just miss seeing them every day.”