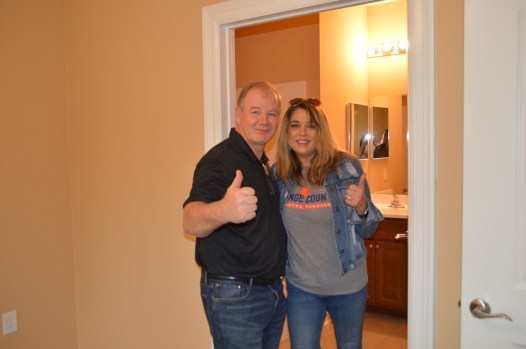 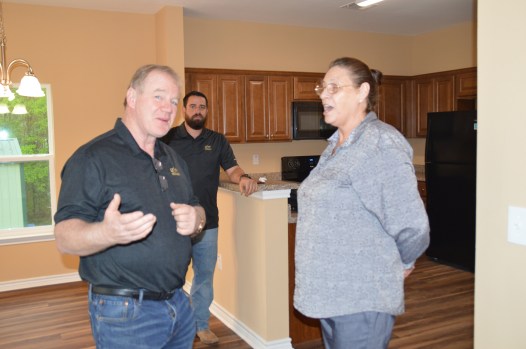 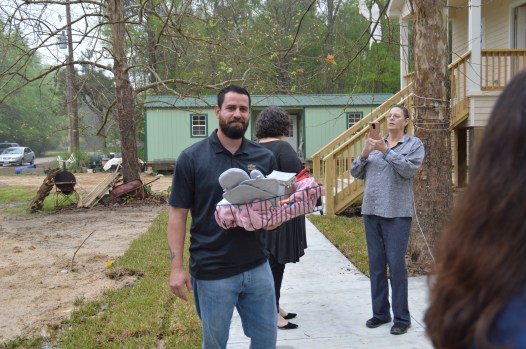 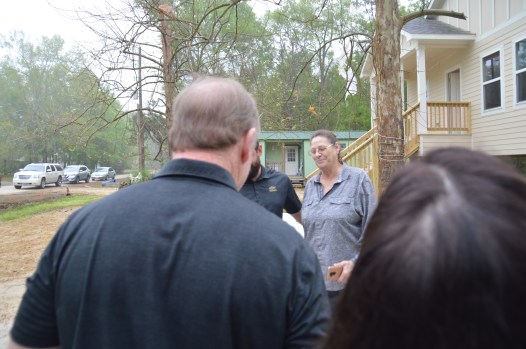 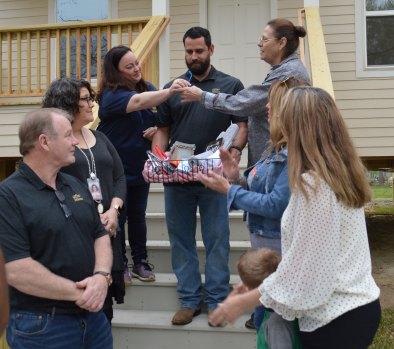 Dawn Burleigh/The Orange Leader Scarlet Richardson is presented keys, on Wednesday, to her home which was built through funding from the Texas General Land Office in Community Development Block Grants for Disaster Recovery and the U.S. Department of Housing and Urban Development (HUD), for rehabilitation and reconstruction of thousands of owner-occupied single-family homes damaged by Hurricane Harvey.

Not once but twice, Scarlet Richardson’s home was infiltrated with flood waters. First the flooding from Tropical Storm Harvey in 2017 and then again during Imelda in 2019.

She will not have to worry about flooding again during a rain event such as those as a new home was built for her two feet above the base flood elevation.

DSW Public Affairs and owner Steve Mataro was on site as Richardson was given the keys to her new home.

“From demo to finished is 60 days,” Mataro said. “We present the homeowner with a gift basket when they get the keys.”

This is the 800th home the company has done for the Texas General Land Office (GLO).

“We have done thousands in Texas since Rite and Ike,” Mataro said. “We started doing this with Rita in 2009.

The company only build homes for recovery from disasters.

“We have built over 14,000 across the country,” Mataro said. “I love it. I have a serving heart for the families.”

Scarlet Richardson, of Mauriceville, said she felt like a queen as she walked into her house for the first time after receiving her keys on Wednesday.

While she did not have furniture as yet, she said, “I will sleep on a twin mattress tonight.”

Richardson added that after the flood, she was able to find her title to her home.

“After Harvey, I found my title in a ziplock bag,” Richardson said. “I still had to dry it out.”

It was one piece of paperwork she needed for the application for the grant to help her in the rebuild/recovery process.

To date, the Texas General Land Office has approved more than 2,200 homes for repair or reconstruction and complete about 726 homes. The Homeowner assistance Program is expected to repair approximately 6,000 homes before funds are fully expended.

Individuals affected by Hurricane Harvey potentially qualify for assistance through the Texas Homeowner Assistance Program if they owned their home, it was damaged or destroyed by Hurricane Harvey and it was their primary residence at the time of the storm, among other eligibility factors. The program offers qualified homeowners assistance to repair, rehabilitate or rebuild homes damaged by Hurricane Harvey. Application are being processed on a first come, first served basis, according to the priorities outlined in the Regional Housing Guidelines.

The application for this highly-successful program ended December 31, 2019.

The program is anticipated to continue processing applications and rebuilding homes through 2021.