Lady Cardinals roll past Lady Mustangs in 22-4A play 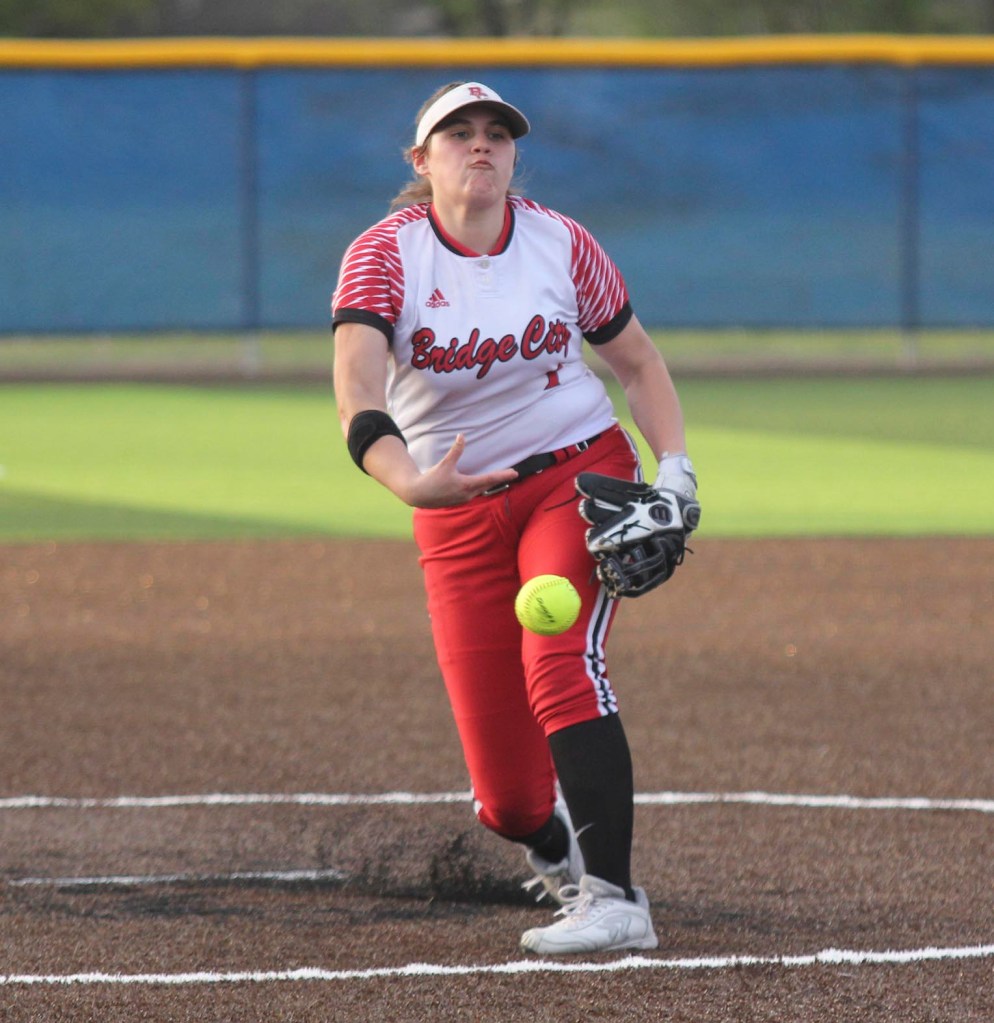 Van Wade/Orange Leader Austyn Daniels delivers a pitch against WO-S in 22-4A action.

WEST ORANGE – It may be a couple more weeks before area softball teams can play again due to the Coronavirus scare but the Bridge City Lady Cardinals were finally able to get a District 22-4A win under their belts as they took down the West Orange-Stark Lady Mustangs 15-1 in six innings in 22-4A play at Lady Mustang Field Friday night.

It was the 22-4A opener for the Lady Cardinals, who had a bye in the seven-team district on Tuesday, while the Lady Mustangs fell to 0-2 in 22-4A play.

The Lady Cardinals picked up 13 hits and took advantage of nine walks and five Lady Mustang errors to nab the win.

Natilee Reed went 4-for-4 at the plate for the Lady Cardinals and drove in two runs with a double. Kyndall Harrison was 2-for-3 and drove in four runs and had a pair of doubles. Courtney Ball was 2-for-4 with two RBI and Madyson Melton was 2-for-5 with a RBI.

Haylee Veitch worked all six innings for the Lady Mustangs.

The Lady Cardinals scratched in three runs in the top of the first.

Harrison drew a leadoff walk and eventually scored on a error. After Ashley Gerraled drew a walk and Reed singled to right, Melton drove in a run with a single between short and third. Marlie Strong made it 3-0 with a RBI groundout.

Bridge City scored two runs in the third on one hit as they went on to score both runs on errors.

The Lady Mustangs snared their run in the bottom of the fourth.

Gabby Tims led off with a single to right. Latoya Janice reached on a fielder’s choice and Veitch reached on an error that sent Janice to third. Tailyah Washington drove in Janice with a RBI groundout.

The Lady Cardinals struck for five runs in the top of the fifth.

Leah Jeffrey drew a walk and Austyn Daniels singled to right. Aspen Daniels drew a one-out walk to load the bases. After Ball had a RBI single to center, Harrison cleared the bases with a three-run double to deep leftfield. Reed capped off the inning with a RBI double to left.

The Lady Cardinals added five more runs in the top of the sixth. Ball brought in a run with a RBI single. Harrison drew a bases-loaded walk to score another run. Gerrald had a sacrifice fly to score another and Melton capped the scoring with a two-run single.

Tims, Janice, Washington, Laila Mims and Tiera Garrett each had a hit for the Lady Mustangs.

Gerrald, Austyn Daniels and Hannah Murchison each had hits for the Lady Cardinals.