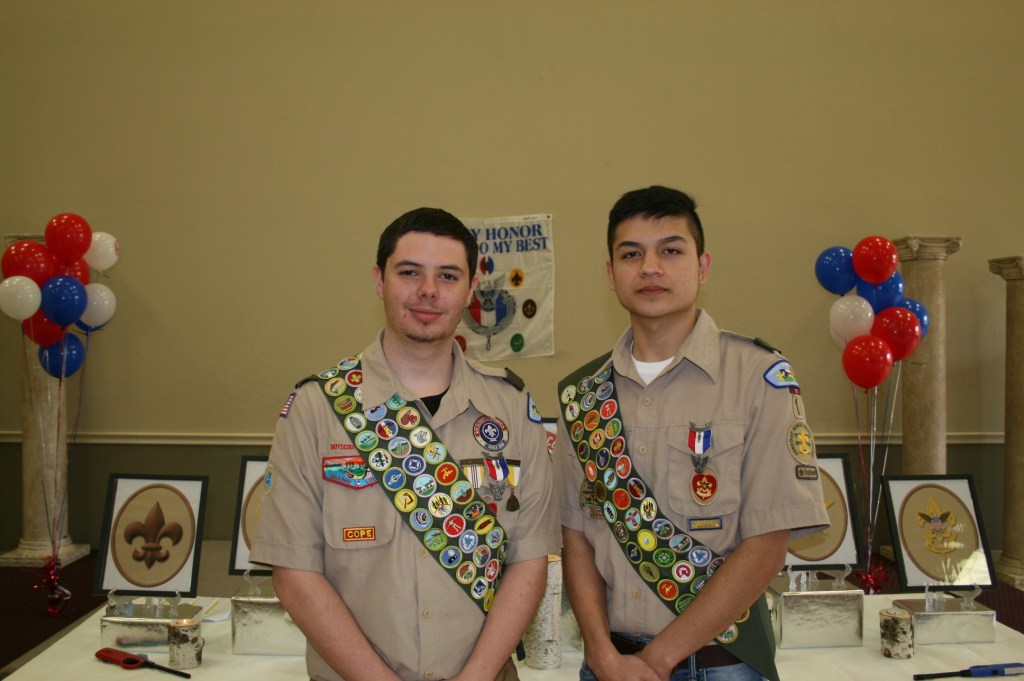 Matthew along with his Troop 1 scouts, troop leaders, and other volunteers worked 165 man-hours reviving the pantry and building permanent shelves over the summer of 2019.  Matthew became a Cub Scout in Pack 1 during first grade while he was a student at St. Mary Catholic School which he attended from Pre K-3 to 8th grade.

During his scouting years, he has held numerous positions in the troop such as Troop Guide, Assistant Senior Patrol Leader, Chaplain, and Historian. Matthew has attended many Boy Scout camps and in 2017 completed a 12-day, 58-mile hike at Philmont Scout Ranch in New Mexico.

In addition to Scouting, Matthew is currently a senior at Little Cypress-Mauriceville High School.

During his four years at LCM, Matthew has played on the basketball team, track team, cross country team, and participated in theater.  His passions are Grizzly Team and Student Council.  Matthew went to state with his cross-country team and Theater Productions and has lettered in both.  He has been active in Student Council since 7th grade and is currently the Student Council Vice President.  He is best known for his leadership and school pride in cheering on LCM as part of the Grizzly Team and is currently captain.

Matthew attends St. Francis of Assisi Church where he has been an altar server since 5th grade, and he is an active member of the Keysis youth group.  He has also served as an Episcopal Altar Server for the Diocese of Beaumont since 7th grade.

Matthew has been working part-time at H-E-B Pantry in Orange since 2018 as a cashier/bagger while maintaining an A/B average and juggling all of his other activities.

Over these years via his student/church organizations, Matthew has given back to his community.  He has worked at the Orange Soup Kitchen, worked the Community Trash-Off, volunteered during disaster relief and recovery through the Salvation Army, and worked other miscellaneous events such as ‘Back to School Orange.’

Matthew will attend Blinn College in Fall 2020 to pursue a degree in Business-Supply Chain.

He is the son of Ruth Erb of Orange, and Forrest Erb also of Orange.

They also cleaned out a flowerbed and planted six rose bushes, which have since started to bloom.  Bryce coordinated over 135 service hours to complete his project.

Bryce has been a Scout since joining Cub Scouts in first grade.  He is a member of Order of the Arrow, scouting’s national honor society of Boy Scouts.  Bryce has completed 71 merit badges, which earned him 10 Eagle Palms.

He has held numerous positions in the troop such as Assistant Senior Patrol Leader, Webmaster, Librarian, and Patrol Leader.  Bryce also earned the Ad Altare Dei Religious Award and the Pope Pius XII Religious Award for Catholic Boy Scouts. Bryce has attended many scout camps, including those in Texas, Louisiana, Alabama, and Mississippi.  His most memorable was in 2017 when he joined others from Troop 1 to attend Philmont Scout Ranch in New Mexico for a 12-day, 58-mile hike.

Since Bryce entered high school his freshman year through today, he had and still has Perfect Attendance.  Bryce’s attended St. Mary Catholic School for PreK and 1st – 8th grade.

Bryce is involved in the community and participates in many service projects including the trash off, disaster relief and recovery efforts, can good drives, local United Way service projects, Back to School Orange County and much more.  He is a member of St. Henry Catholic Church in Bridge City.

Bryce works part-time at Market Basket in Bridge City where he started as a sacker, and now works dairy, stocker, cashier, and MB2Go.  He does all of this while maintaining A’s and B’s in school.

Bryce plans to attend Blinn College in the fall of 2020 and pursue a degree in Business.

Bryce is the son of Maureen McAllister and Mike McAllister, both of Bridge City.