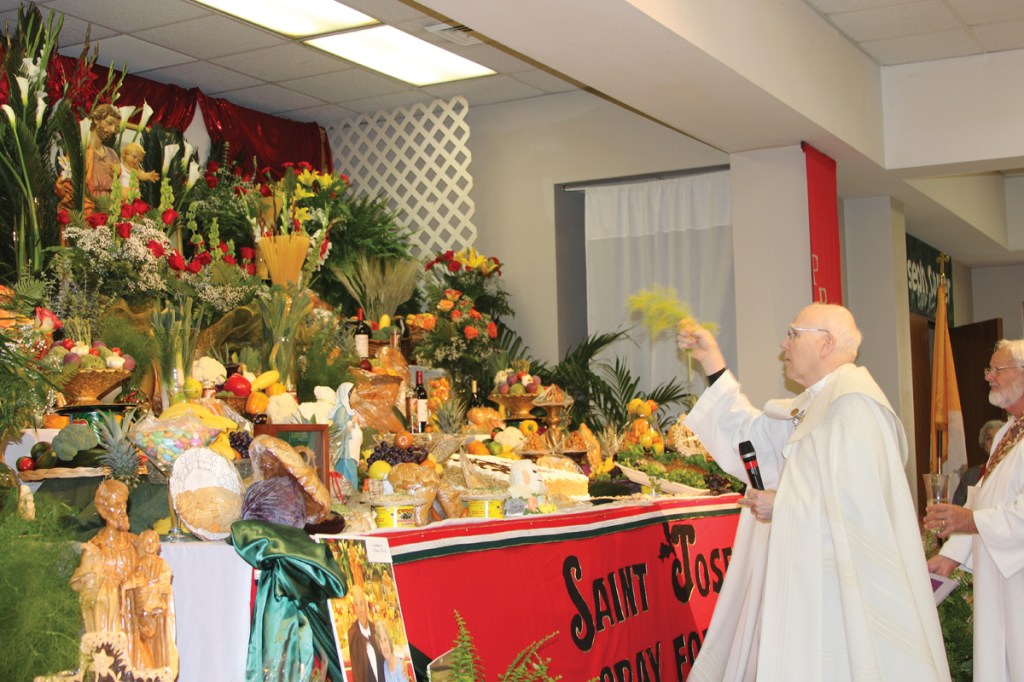 Courtesy photo St. Joseph Altars, such as the one pictured, will be held throughout Southeast Texas. St. Mary Parish, located at 912 W. Cherry in Orange, will host it’s annual Altar honoring St. Joseph at 10:30 a.m. on Sunday, March 15. The event is free and open to all.

In honoring the saint, the event will include a luncheon of Pasta Milanese, baked fish, fried and baked vegetables, stuffed artichokes, assorted vegetable casseroles, and many special Italian cookies and desserts, prepared in the Sicilian tradition for dine-in only.

Pasta Milanese is the leading entree on the altar. The tomato sauce is made with a fish base of sardines or anchovies. The sauce also has wild anise greens, pignola, and currants. It is topped with fried seasoned breadcrumbs to represent the sawdust of St. Joseph the carpenter.

St. Joseph Chaplet will be recited at 10:30 a.m. followed by the Blessing of our Altar at 11 a.m., after the Blessing, the Saints will be served and then all other attendees.

The service is free, but the church will accept Love Offerings by those participating with proceeds being distributed to local charities and soup kitchens in Orange.

Contact the Parish Office if you wish to make a donation. Donations are needed to provide fruit and other food items, or you may volunteer.

Donations are also needed for Flowers on the Altar. Call (409) 883-2883 for additional information.

This Parish Celebration, motivated by love, is open to all.

According to the history of the event found at www.catholicculture.org, the people of Sicily prayed. For too long there had been no rain to nourish the crops that sustained life for most of the island.

The dried out wheat stalks cracked beneath the feet of the poor farmers as they walked through their barren fields. Only a sea of dust and withered vines remained from what had once been row upon row of brightly colored fruits and vegetables.

And so the people prayed.

They pleaded to St. Joseph, their patron, for relief from the famine that gripped the island. At last the skies opened, sending down the life-giving water. The people rejoiced. Some time later, to show their gratitude, they prepared a table with a special assortment of foods they had harvested. After paying honor to St. Joseph, they distributed the food to the less fortunate.

The first St. Joseph Altar set up on the Island of Sicily was a small one, of course. But as time went on and the tradition took hold, the flamboyant nature and creative spirit of the Italians caused the altars to grow larger and more ornate.

Today, the artistic quality of the breads, cookies and pastries, which are baked in such shapes as chalices, staffs, and pyramids, often rivals the exquisite flavor of the food offerings.

Though Sicilian immigrants introduced the custom to America, the celebration is not confined to any nationality. Rather, it has become a public event which its devoted participants embrace for a host of private and personal reasons. The feast is alternately a source of petition and thanksgiving.

Many families believe that having a St. Joseph Altar can bring good fortune. And it is common to hear stories about favors received (a loved one’s recovery from an illness, for example), which are in turn attributed to the family’s dedication to St. Joseph.

But whatever the reasons people become involved. St. Joseph’s Feast Day is a tradition that centers on the entire family. One of the special customs calls for the selection of children to portray members of the Holy Family—Jesus, Mary and Joseph. Angels and favorite saints may also be included in the ritual, which begins with the “saints” going door to door to seek aid until finally reaching the place where the altar is on display.

After the Holy Family has eaten, guests may partake of the meal. Most of the foods presented on the altar are acquired through begging, a symbol gesture that represents what the poor of Sicily were forced to do. When the feast is over, the remaining food and whatever money has been contributed are given to the poor.

Whether a St. Joseph Altar is an elaborate display at an elegant church or a humble table in a modest home, it is a reflection of deep devotion to St. Joseph, the patron of those in need—workers, travelers, the persecuted, the poor, the aged, the dying. And it is a custom that has enjoyed a resurgence in recent years, as young and old have begun to rediscover their heritage.

After many centuries, the St. Joseph Altar still serves as a reminder that those who have enjoyed some measure of good fortune must share it with those who have less.