Pinehurst and GLO hold a kick-off for infrastructure improvements 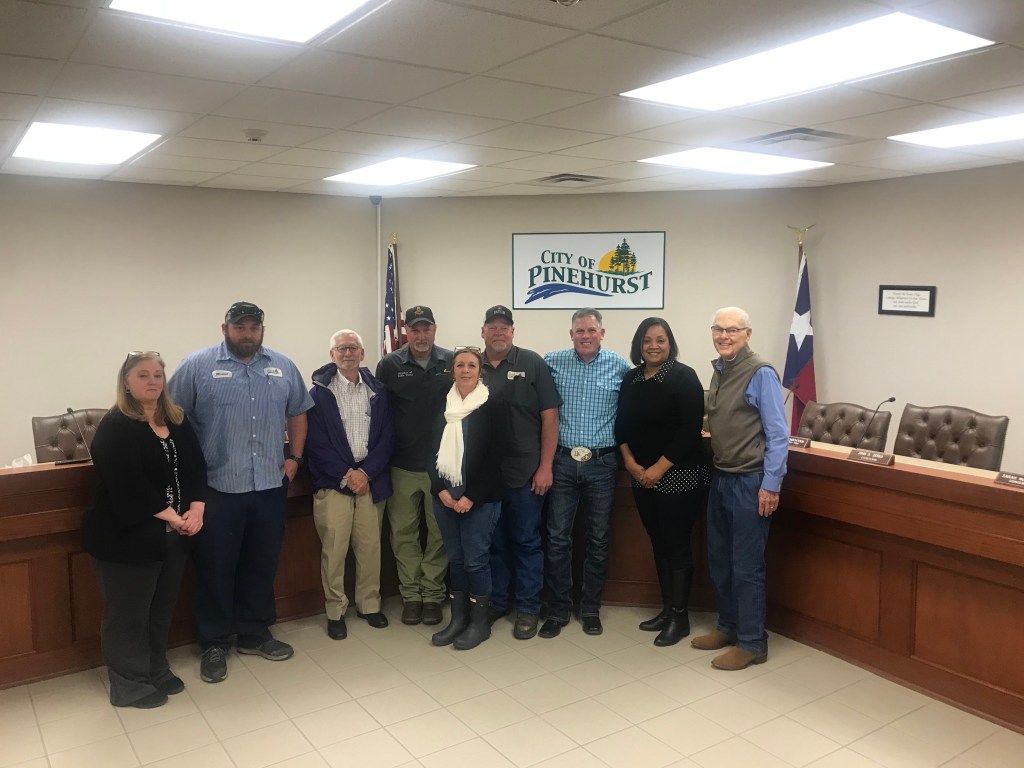 PINEHURST — Over two years since the rain event known as Harvey inundated the area with flooding throughout the area, Texas General Land Office (GLO) held a kick-off meeting with the city of Pinehurst on Tuesday to allocate $6.8 million to improve infrastructure in the city.

“This will enhance the quality of life for the citizens of Pinehurst,” City Administrator Robbie Hood said. “It is a great day for the city and look forward to the projects being completed.”

The contract end date is April 30, 2022, giving the city approximately 25 months to complete the projects.

The funding will come from GLO and at no cost to the citizens.

First project, after the bidding process is completed, is raising the electrical building at the wastewater plant.

“This will enable Pinehurst to be more efficient in the process of water treatment,” Water/Wastewater Supervisor Michael Spain said.

The building will be moved 100-150 feet from its current location as well as being raised four feet above ground level.

“If we ever have another Harvey, it will not go underwater,” Spain said.

The project also includes redoing the blowers for the treatment plant room to aid in the efficiency of the water treatment process.

Another project for the funds includes pipe bursting sewer lines throughout the city.

“It is almost five miles of sewer lines which will benefit the citizens and there will be fewer issues with heavy rains,.” Spain said. “The new lines should last 40-50 years.”

Replacing the lines also helps prevent infiltration of rainwater in the system, which means the city will not spend funds on treating rainwater and only treating wastewater.

“Replacing the lines throughout the city will tremendously reduce infiltration and reduce the wastewater treatment plant has to disinfect,” Hood said.

Fewer chemicals add to more savings for the city, allowing the funds to be redirected to other needed areas.

The city is under an innovative with TCEQ to eliminate rainwater infiltration in the sewer system.

“This grant enables the city to address that infiltration,” Hood said.

The final phase of the projects will be roads.

“We will work on 20-25 streets in the city which are heavily inundated with water such as Concord, West Park and Lexington Drive,” Toney said. “This will improve travel for our citizens.”

Toney added it would relieve the city of patching the roads so their attention could be put on other areas.

“It will allow us to better care for the parks and digging ditches,” Toney said.

“The council is excited about the projects,” Mayor Dan Mohon said. “This will really improve the quality of life in Pinehurst. We will be in a much better place in two years when the projects are completed.”

Mohon asked the citizens and commuters throughout the city to be patient while the construction is underway.

“Harvey was devastating,” Mohon said. “Pinehurst is already in a better place due to cleanup and handling waste. While the city is small, we were clean before other areas. We are underway to bring Pinehurst back to the beauty it was before Harvey.”

Mohon added the city staff worked 18 hour days to clean up and move debris after Harvey.

“Moving forward,” Mohon said. “The council’s goal is to continue to clean up the city to make it a better place to work, live and play.”

He also added 10 houses are set to be demolished if not brought up to code in the next year.

“With the great work of our employees, there are several projects moving forward to help improve the city,” Mohon said.

Projects such as having businesses cleaning up their locations such as the lawnmower place on 29th and Park, according to Mohon.

“It will look nice when it is finished,” Mohon said. “There are smaller general clean up projects along Martin and other streets..

Mohon wants others to want to be a part of Pinehurst as well.