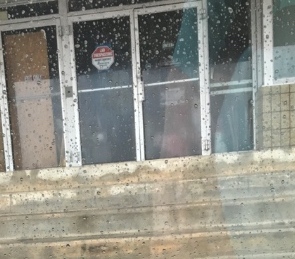 Courtesy photos Signs warning to not trespass or dump trash are just one part of the strives forward Orange Community Players has made in remodeling the old movie theater into a live theater.

The theatrical group has seen many stumbling blocks since the rains destroyed the roof at its old location on Division Street.

Now located in the old movie theater building on Bowling Lane, the group is making progress towards opening the doors for performances but is still facing challenges as the structure is vandalized.

“People are dumping couches on the property and the door has been busted,” Diana Hill said.

On one occasion, teenage boys came in through the roof and caught by a board member.

The group will prosecute anyone caught breaking in or vandalizing the property.

The structure is divided into two halves with a majority of the current work being done on the south side of the building.

“We are getting close to the black box,” Hill said. “Which means we can do small productions such as comedies and children’s workshop.”

The north side of the building will be the main stage for larger productions.

OCP lost everything from scripts, wardrobes, to sound systems when Hurricane Harvey inundated the area with the historic record of rain.

Despite having a permanent stage as yet, the troupe has continued to perform and hold fundraisers.

Orange Community Players was originally founded as “Town Theatre” in 1950. Productions were held at Helen Carr Junior High School and Anderson Elementary School. The production group has been housed at its previous location from 1960 to 2017.