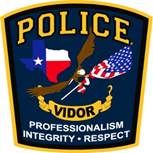 John Dylan Stanley, 25, of Vidor, was identified as the person killed in a fatal hit and run wreck in Vidor on Monday.

Vidor Police Department Dispatch Center received a call of an auto-pedestrian accident in the 1600 block of N. Main in front of Our Lady of Lourdes Church. The caller advised a black pick-up struck a pedestrian that was in the roadway and the vehicle had left the scene.

The black pick-up was last seen turning west onto Wexford Drive and entering the Wexford Park Subdivision. A check of the area was made but no vehicle was located.

The victim was found lying in the roadway and was pronounced dead.

Justice of Peace Stagner was called to the scene and ordered an autopsy.

Vidor Police Department is asking the assistance of the public to identify the vehicle and driver. All residents of Wexford Park Subdivision are asked to review their home video systems to see if they have an image of the vehicle. The vehicle would have entered the subdivision around 11:48 p.m. on February 25, 2020.

Crime Stoppers will pay a reward of up to $1,000 to anyone with information leading to the arrest and conviction of the driver. Crime Stoppers phone number is (409) 833-TIPS (8477)

The vehicle should have damage to the driver’s side front of the vehicle.