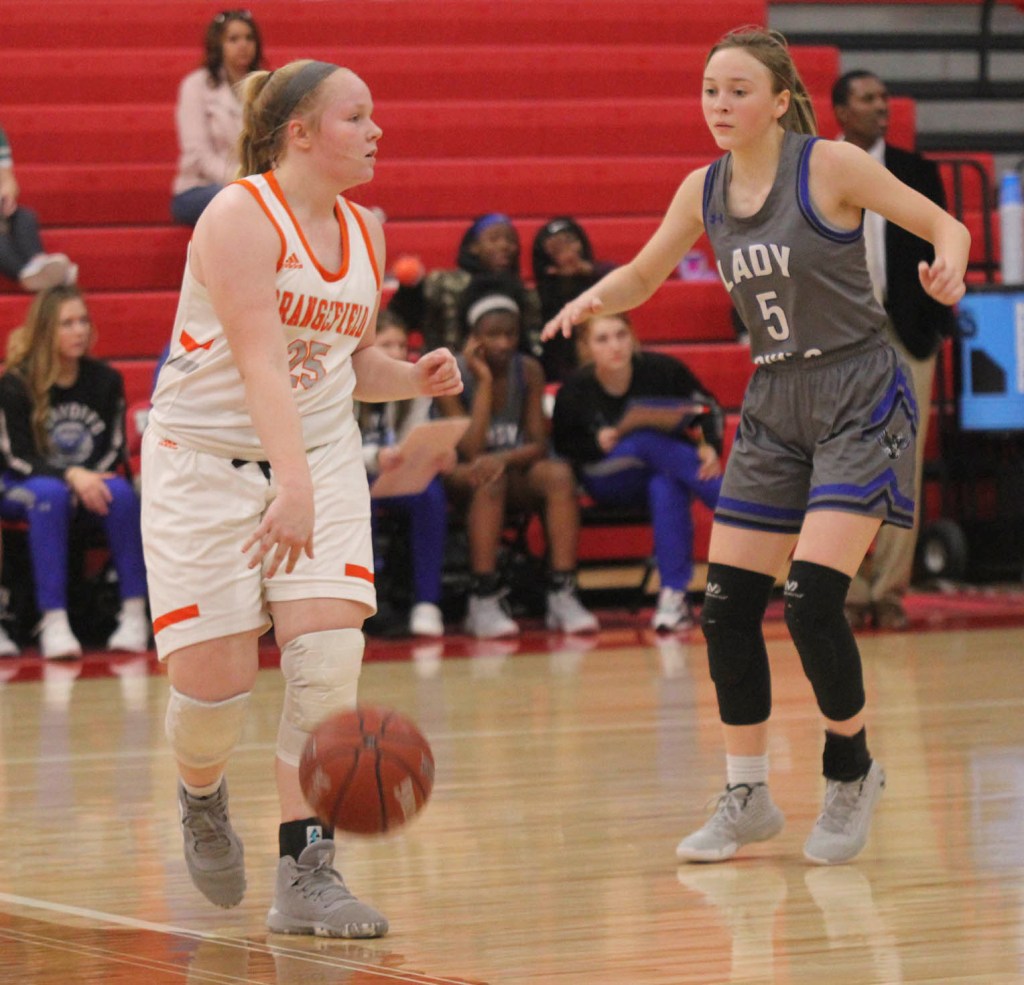 HUFFMAN – Leaving it all on the floor, the Orangefield Lady Bobcats gritted one out Friday night, and with that effort, they are moving on to the Class 3A Region III quarterfinals.

The Lady Bobcats made key plays down the stretch as they survived a 55-53 overtime victory over the Anderson-Shiro Lady Owls in the area round at Huffman High School.

The Lady Bobcats (28-12) will now move on to face Hitchcock (26-5) in the 3A Region III quarterfinals Tuesday at 6:30 p.m. at Liberty High School. Hitchcock defeated East Chambers 66-58 Tuesday night.

Both teams flip-flopped with the lead throughout most of the night as it was certainly a nip-and-tuck battle all the way.

The game was tied 49-49 at the end of regulation in a very rugged, tightly-defended battle.

Kenadie Dubois scored the first four points for the Lady Bobcats in the extra session, giving Orangefield a 53-49 advantage with 2:40 left.

Lady Owl Shelbi Belinowski answered with a pair of free-throws and Delany Compean tied it with a nice drive.

Lady Bobcat senior Faith Fregia put the Lady Bobcats ahead to stay with 0:24 left with a steal and a layup. Fregia finished with 18 points.

The Lady Owls (20-14) had a chance to tie it or win it but a Belinowski drive fell short and Lady Bobcat Madison Greenway snagged a huge rebound and got the ball to Dubois, who was fouled with 3.3 seconds left. Dubois missed both foul shots but the Lady Owls did not have enough time to get a quality shot off near halfcourt.

Jacey Bourque showed off her flashy driving skills throughout the game and she finished with 18 points and eight rebounds for the Lady Bobcats.

Joli Ponfick set up the offense well and finished with 10 points and five boards. Greenway had a team-high 10 rebounds while Dubois grabbed six rebounds.

Belinowski led the Lady Owls with 14 points and had six rebounds. Compean finished with 12 points and six boards.

Anderson-Shiro’s top ballhandler Haley Mason had seven points and a game-high 15 rebounds but fouled out early in the fourth quarter as four of her fouls were drawn by the Lady Bobcats taking nice charges. Lady Owl post Jay Matthews added nine points and six rebounds.

Neither team could pull away but either one could have if they didn’t both struggle from the free-throw line.

The Lady Bobcats were just 5-of-19 from the charity stripe while the Lady Owls were just 9-of-25.

Anderson-Shiro finished with a 46-32 rebounding edge.

The Lady Bobcats showcased excellent defense, forcing the Lady Owls into 27 turnovers while they only committed 16.

Orangefield led 10-8 after the first quarter as Fregia and Ponfick combined for seven points while Matthews had six for the Lady Owls.

Summer Adams, who had eight points and nine rebounds for the Lady Owls, had seven points in the second period, including two big three-point shots as Anderson-Shiro took a slim 24-22 lead into intermission.

Sparked by Bourque, the Lady Bobcats went on a 15-10 run in the third quarter to lead 37-34 going into the fourth quarter. Bourque exploded for nine points in the quarter.

Neither team could pull away in the fourth quarter are overtime session as they combined to go 9-of-25 from the free-throw line in the last 12 minutes.

After two nice slashing drives by Fregia, the Lady Bobcats grabbed a 49-46 edge with 1:34 left in regulation.

Compean got the Lady Owls within one by hitting two foul shots with 0:51 left.

Belinowski had a chance to put the Lady Owls ahead with 0:19 left at the line. She made the first one to tie it but misfired on the second.

In the waning seconds it looked as if Dubois was fouled near halfcourt right before time expired but the officiating crew met and decided that the clock had ran out.