The Bridge City Lady Cardinals finished off the first round of district play Friday night with a solid 4-0 win against the East Chambers Lady Buccaneers.

Hannah Silveira had a hat trick on the night, and tallied her first score within the first three minutes of the game off an assist by Mala Kuhn.

Despite playing an offensive game the remainder of the first half, the Lady Bucs kept the Lady Cards scoreless from goal one until halftime.

Silveira continued her scoring streak in the second half with an assist by Asia Terri and Reesie Ryder.

Kaitlyn Lawrence and Julie Klinkhammer split time in the goal, and had a successful shutout on the night with help from Gracie Lyons and Diana Le on the defensive line. Lawrence had one save and Klinkhammer added two more.

Lawrence wasn’t done yet though, as she left the goal and added the final goal of the night for the Cards before time ran out.

Offensively, the team totaled 26 shots at goal from eight different players. The Lady Cardinals finished the first round of district 3-3. They have a bye on Tuesday and will start round two of district next Friday at home against the Hardin Jefferson Lady Hawks at 5 p.m. 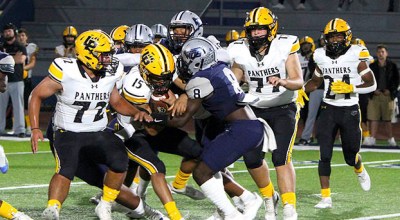