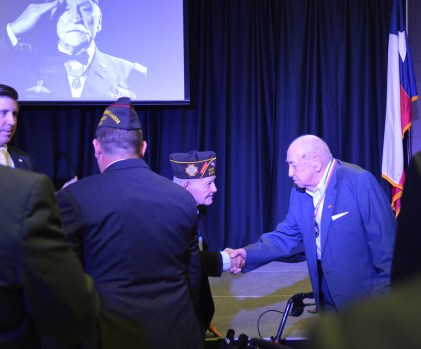 War World II veterans, Davey Dixon, left and Clyde Covey, shake hands after being honored at the Orange County Republican Reagan-Trump Dinner on Saturday. The veterans were also presented a flag and a certificate from Congressman Brian Babin, also a veteran. 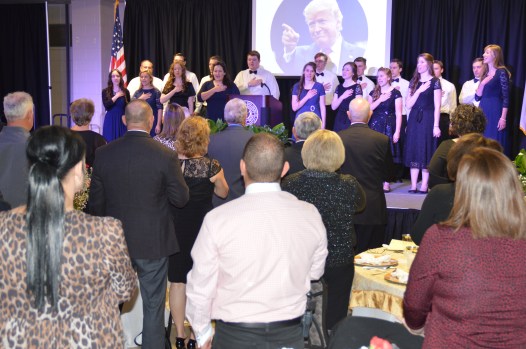 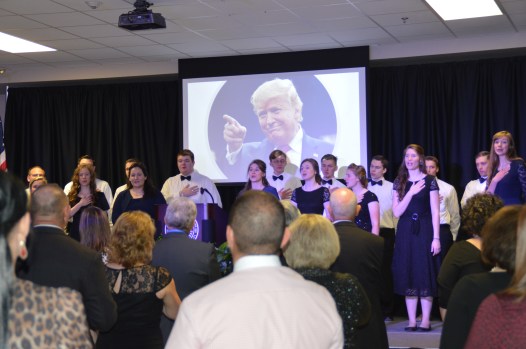 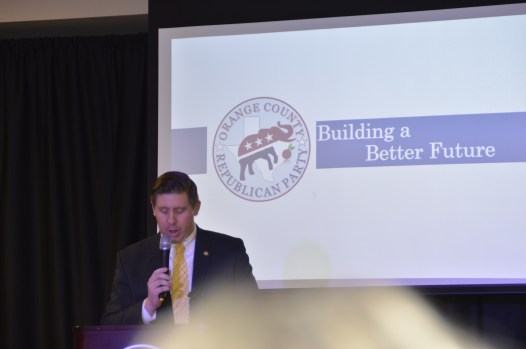 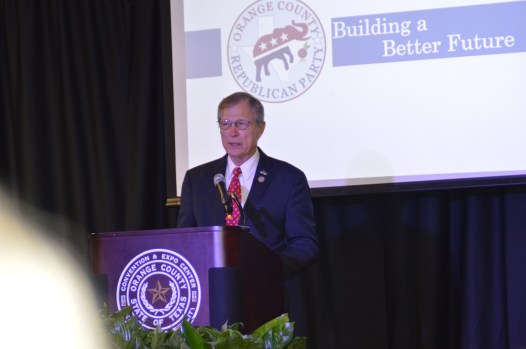 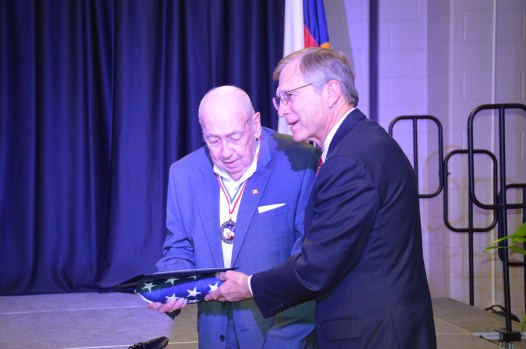 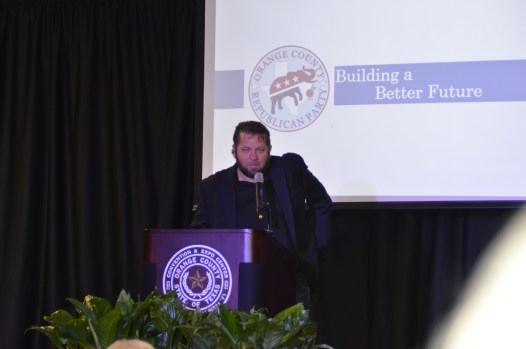 Orange County’s own Michael Berry speaks during the Orange County Republican Reagan-Trump Dinner on Saturday. He spoke on the values of America the Republican party today.

Michael Berry, the Czar of Talk Radio, held true to his name and his Orange, Texas roots as he held the audience captive when he spoke at the Orange County Republican Reagan-Trump Dinner on Saturday.

Berry was the keynote speaker at the event held at the Orange County Convention and Expo Center.

Before Berry took the podium, two War World II veterans, Davey Dixon and Clyde Covey were honored for their service to our country as part of recognizing the 75th commemorative anniversary of the end of WWII. V-J Day (Victory in Japan), August 14, 1945, was when the Japanese accepted the terms of the Potsdam Declaration and unconditionally surrendered. September 2, 1945, was the day the Japanese delegation formally signs the instrument of surrender on board the USS Missouri, marking the official ending of World War II.

“Thanks to Pelosi, we get four more years of Trump,” Covey said.

He also announced that through the fundraising efforts of this dinner and the previous dinner, the local party now has an official office in Orange County.

“We opened the first-ever headquarter office in Orange County,” Covey said. “This was part of past chairs and a grassroot effort to make it happen.”

With the early election to begin in just a few short days, Covey also noted not one Democrat filed to run against a Republican in any local races. 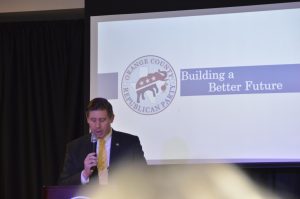 “I officially announce the Democrat party is dead in Orange County,” Covey said.

Congressman Brian Babin asked those in attendance to keep the faith in the November election.

“If impeaching the president because they don’t agree with him, what protects the rights of the rest of us,” Babin asked. “Be very suspicious of anyone who wants to reduce our freedoms.”

Babin added, “Under Trump, we are better today.”

“Our President does not serve under the elite in Washington,” Babin continued. “He has returned the center of gravity to the American people.”

Texas Senator Robert Nichols, who requested Orange County 10 years ago during redistricting, commented during the next legislation it would be redistricting time again.

“When I requested Orange County, it was still predominantly Democrat,” Nichols said. “Now it is the number one Republican district in Texas. I had a Democrat opponent and won 78% to 21%. You are the ones who did it, not me.”

He also added that when Cruz won by 2.6%, that half those winning votes came from Orange County.

“Next session will be redistricting,” Nichols said. “I don’t want a Democrat redrawing Dade Phelan, mine or Babin’s districts. We are going to win and by a lot. We also have a better message.”

Texas Representative Dade Phelan spoke about the honor he received when he was named Chairman of State Affairs.

Phelan was instrumental in legislation passing to reduce tuition at such institutions as Lamar State College-Orange.

“These institutions have record enrollments,” Phelan said. “This is where people start careers not jobs. After Harvey, people were having to decide between tuition or sheetrock. This allowed them to do both.” 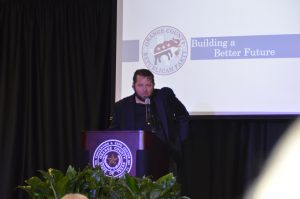 Orange County’s own Michael Berry speaks during the Orange County Republican Reagan-Trump Dinner on Saturday. He spoke on the values of America the Republican party today.

Michael Berry was received with a standing ovation when he was announced as the guest speaker.

“When I hear of an elected official falling in kids vomit,” Berry began. “We have all been there. The student presidents don’t understand what’s important. Phelan identifies with the rest of us. That is how the system works.”

Berry also added that maybe, “We can get a road named for Wade Philips in Orange County.”

He also added the person he is, is not political.

“Who I learned to be was in McLewis and Lorena Oats. It was at Orangefield Junior High and High School. It was at Old First Baptist Church,” Berry said. “It was because of my parents I learned how to respect women, to respect teachers.”

Berry added his parents were Democrats and those values are not democrat values anymore.

“Those values are what matters,” Berry said. “Not the letters R and D. The values of Americans.”

Growing up in a time when people did not talk about parties, he added, “You knew right from wrong and to treat the opposite sex with respect.”

Fixing a cultural problem will correct the political system downstream, according to Berry. One such issue is fatherless homes.

“They have to put bandaids on a problem which should be solved at home,” Berry said. “We have to show values to our neighbors even when they drive us nuts,” Berry added. “Cultural changes come from using our heads, heart. We can’t keep yelling.”