Jacobs-Stantec team selected by US Army Corps of Engineers to design $1.9 Billion Levee and Floodwall System along Texas Coastline including Orange 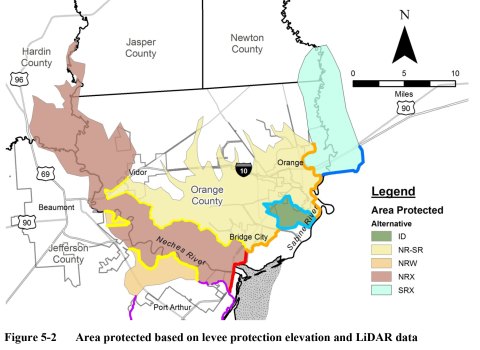 DALLAS (PRNewswire)– Jacobs (NYSE:J) and Stantec, operating as the Galveston Coastal Services Joint Venture, have been selected by the U.S. Army Corps of Engineers, Galveston District, to design a 26.7-mile-long levee and floodwall system along the coastline near Galveston, Texas. The USACE has estimated this to be an eight-year, $1.9 billion construction effort, known as the Orange County Coastal Storm Risk Management project (or simply “Orange”), that will increase the area’s preparedness to respond to natural disasters and disturbances. It will also increase resistance to long-term impacts due to climate change – including sea level rise, land subsidence, increased frequency of abnormally heavy rainfall events and regional drought.

Orange centers on a stretch of the upper Texas coast from Sabine Pass to Galveston Bay, and includes gulf and bay waters, barrier islands, marshes, coastal wetlands, rivers and streams and adjacent areas that make up the interrelated coastal space. This area is repeatedly at risk from substantial wind and surge damage. The resulting shoreline erosion has caused the destruction of nationally significant wetlands, land loss and damage to homes, commercial property and State Highway 87. Over the past 10 years, the area has been altered both physically and economically by extreme weather events such as Hurricane Harvey, which caused billions in damages.

“A fundamental element of Jacobs’ purpose is helping clients solve some of the toughest problems, and Orange – a strategically important resiliency investment by USACE – is a prime example of such a project and an early step in a larger overall national civil works investment strategy that Jacobs will support, leveraging our specialized capabilities in sustainable and resilient infrastructure planning and design,” said Jacobs Senior Vice President of Federal & Environmental Solutions Pankaj Duggal. “Essentially, we are creating a coastal spine that will help protect the Texas coast, providing a solution that not only benefits this area long-term, but the millions of people and businesses in this region that are most impacted by weather.”

The project is designed to strengthen coastal facilities and infrastructure on which many energy systems, markets, consumers and residents depend. Texas, along with Louisiana, Mississippi and Alabama, are home to more than 80% of the nation’s energy resources. Within the greater Houston Metropolitan area alone, there are nearly seven million people, three airports that serve more than 58 million passengers a year and more than 575 miles of highways.

“The economics of flood protection are changing, and proactive measures are critical to a community’s social and economic resilience strategy. For each dollar spent on resilient building and construction, six dollars are saved in recovery costs,” said Stantec SVP and Sector Leader for Water Resources John Montgomery. “Our JV consists of leading project management with a track record of delivering large-scale infrastructure projects that will reduce the impacts of disasters and fortify our domestic energy security.”

Orange consists of seven design packages for coastal storm risk management, from the edge of the Sabine and Neches River floodplains, to the vicinity of Orangefield, Texas. The project will include:

453 acres of marsh restored through a mitigation plan

Also encompassing navigable sector gates to reduce surge penetration, this project is one of many coastal storm risk management measures for the region designed to combat these increasingly frequent historical storm conditions. Construction is anticipated to begin in 2022 and project completion is expected in 2026.

Approximately 540 JV and team members across multiple disciplines will execute and deliver the design packages in roughly 18 to 24 months. In addition to the Jacobs-Stantec team, this partnership includes 20 local, small business enterprises representing 40% of the design budget. Construction is anticipated to begin in 2022 and project completion is expected in 2026.

This project was authorized under the Sabine Pass to Galveston Bay Study. The U.S. Army Corps of Engineers Galveston District and the Texas General Land Office completed the Sabine Pass to Galveston By Coastal Storm Risk Management Project study in Dec. 2017, which examined coastal storm risk management approaches for the Sabine and Brazoria regions. The study recommended constructing new levees in Orange County and raising the existing levees in Port Arthur and Vicinity, and Freeport and Vicinity Hurricane Flood Protection System, to reduce the risks of tropic storm surge. The project is currently in the design phase and is subject to change.