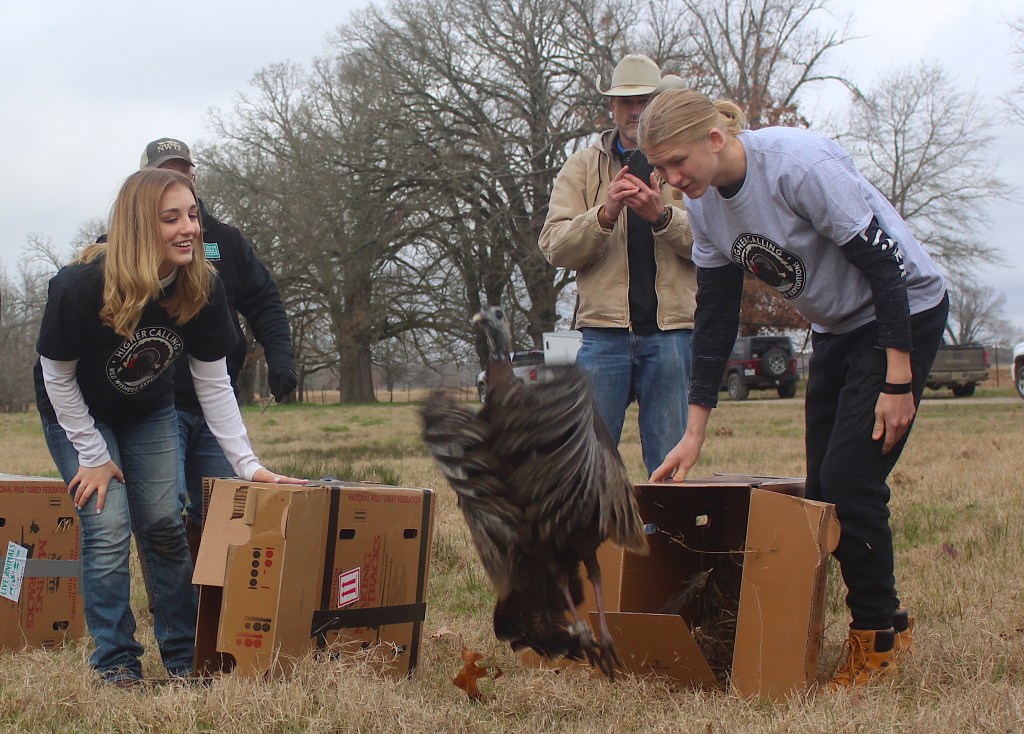 Dustin Wolfe of Vidor and Emily Odom of Graham were all smiles.

As they carried the boxes labeled “National Wild Turkey Federation” the two discussed how they couldn’t believe what they were getting to do.

“Actually,” Emily said. “I sort of can believe this because through the Wild Wishes program I have gotten to do so many amazing things. And this is so cool!”

Wild Wishes grants wildlife encounters to young people 18 and younger who have a critical illness or have lost a parent or sibling.

Emily and Dustin’s participation in this release is helping kick off Higher Calling Wild Wishes Expeditions which helps young people from the Wild Wishes program learn to become wildlife conservationists.

“It’s the next level of the Wild Wishes program and having officials with the Texas Parks & Wildlife Department (TPWD) and National Wild Turkey Federation (NWTF) allow kids from our program to participate in their eastern turkey release is incredible. We are so grateful they get to see these amazing acts of conservation in action. TPWD and NWTF have made a big difference in the lives of Emily and Dustin,” said founder Chester Moore.

The birds, the two carried, were from the 24 brought to this property in Titus County near Mount Pleasant from North Carolina to accomplish what TPWD calls a “super stocking”.

A “super stocking” involves releasing a minimum of 80 turkeys at each site over time with the ideal ratio of three hens for each gobbler. Releases in December 2019 put around the same amount of birds on the property.

In the past, TPWD released smaller numbers onto available habitat but over the last decade went to larger stockings and are seeing more success.

Eastern turkeys are native to the Pineywoods of East Texas but a combination of habitat degradation and poaching wiped out much of the stocks by the 1970s.

Stockings attempts in the 1970s involved releasing Rio Grande birds from the Hill Country as well as pen-raised Easterns but both failed to gain traction.

Now TPWD only releases wild-caught Eastern turkeys from states like North Carolina, Missouri, Georgia and Mississippi. Eastern turkey numbers are somewhere between 7-10,000 now in the Pineywoods and there is a spring hunting season in numerous counties.

TPWD gives a $500 donation to participating state wildlife programs for each bird that comes from upland game bird stamp sales. Transportation and other fees are covered by NWTF who also help facilitate capture and releases.

An NWTF chapter in North Carolina, for example, helped organize the capture of these birds which were removed from an airport due to safety reasons.

“We are excited about Higher Calling Wild Wishes Expeditions. We had one of our young ladies participate in a desert bighorn capture and release with TPWD near Alpine and that along with this turkey release has really given our kids a boost,” Moore said.

This summer the program takes a group of graduating seniors and college-age girls from the program to Colorado on a wild sheep, turkey and elk quest and boys into Montana in search of bears, bison and mountain goats.

Another trip will involve a catch-and-release expedition for boys in the Texas Hill Country in search of the Texas native Guadalupe bass.

“Wild Wishes has been around six years this year and we have more than 100 young people in the program. This is the next step and it is not only allowing us to take youth from our area into the west to learn about conservation but also to bring kids in places like Colorado and Montana into the program that started right here in Orange, TX. It’s pretty exciting,” Moore said.

To learn more about the program or to help sponsor an expedition go to wildwishes.org.