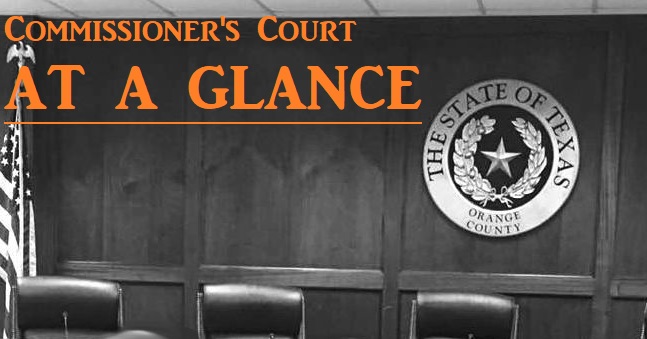 In open comments Precinct One Commissioner Johnny Trahan reminded everyone about the upcoming open house for the Interstate10 project with TxDOT.

“It looks like the design will be to replace the feeder road bridges. On the notice I got that made me a little concerned was no side lanes on the interstate. Everyone needs to show up and give their input. You will see the flashing sign on MLK,” Trahan stated.

The TxDOT open house is at 6 p.m. on Thursday, February 20, at West Orange Elementary on MLK Drive in Orange.

He went on to talk about the MacArthur Drive project, “I am trying to convince them that that is a bad idea. Without all three lanes, if you are pulling off on one of those side roads it’s going to be very hard to get yourself onto MacArthur Drive if they take out two more lanes.”

Trahan added, “We will have a few more conversations with them. See if we can’t make them see the light.”

Precinct Two Commissioner Theresa Beauchamp, who was out sick last week, thanked her fellow commissioners for their support while she was sick.

Beauchamp said, “They called me and asked me if there was anything they could do in Precinct 2 while I was sick so nothing went by the wayside. I want to thank my precinct for being patient.”

“We will do a checklist next week,” Guidry said. “And should be able to tell Tina that the building is ready for voting.”

The court also talked about the progress on the Mauriceville Precinct office which has been closed since Harvey struck two years ago,

According to Guidry, the building has been without a floor for some time.

In December, the court awarded Scarborough the contract to rebuild the office. Recently, mold was discovered in the ceiling tiles.

The plan now is to put a new floor in, replace the sheetrock ceiling with a floating ceiling, and then texture and paint the walls.

Guidry could not give a time estimate on completion.

In other county repairs, Guidry explained there were just a few more items left on the pavilions at Claiborne Park.

Once that is completed, the focus will be the Sheriff Office’s Substation in Vidor.