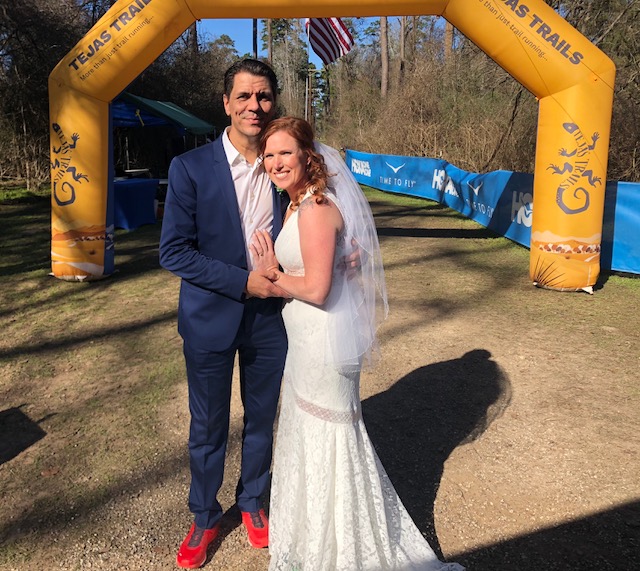 Crystal West and Larry “Laz” West, both of Orangefield, said “I do” at the finish line of the Rocky Raccoon ultramarathon in Huntsville, Texas on Sunday, February 2.

While others were preparing for the Super Bowl, Larry cheered his bride on as she ran a 100k (62 miles). He was unable to participate in the race due to an injury.

At the finish line, the two exchanged their vows making the day a memorable event for them.

“Crystal and I met 5 years ago through trail running and have been running ultramarathons together over the last several years,” Larry said. “So, we decided to get married at the finish line of the race this weekend.”

West competed in ultra-marathon events in pursuit of the Badwater 135-mile Ultra-marathon. Recognized globally as “the world’s toughest foot race,” the legendary event pits approximately 90 of the world’s toughest athletes — runners, triathletes, adventure racers, and mountaineers — against one another and the elements. Covering 135 miles non-stop from Death Valley to Mt. Whitney, CA in temperatures up to 130F, it is the most demanding and extreme running race offered anywhere on the planet.

In 2011, Larry lined up in Perryville, Ark. for the Arkansas Traveller 100-mile ultra-marathon. He moved forward for 29 hours and 17 minutes finishing the 100-mile distance while at the same time beating his prior 50-mile time by over an hour.

Larry was also invited to the Boston marathon, in 2014, for a law enforcement charity “Cops for Kids with Cancer.”