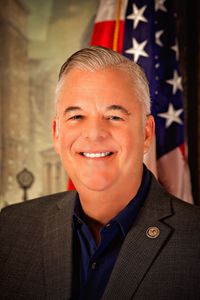 I’m RJ Boatman, a Conservative Republican running for Congress in the 36th Congressional District of Texas.

It’s time to fix the flooding and drainage problems plaguing Orange County, and it’s time we had a Congressman with the energy and fight to actually get the job done. From Rita, to Harvey, to Imelda, storms over Orange County have destroyed both the homes and the lives of our loved ones and neighbors. Fixing this problem cannot be ignored any longer.

You all know I am a conservative and that I strongly believe in lower taxes and less government bureaucracy. However, the protection of citizens lives and livelihoods, as well as building and repairing infrastructure with our tax dollars is a basic function of government. Unfortunately, it’s a basic function that has been neglected in Orange County for too long.

Cow and Adams Bayous are responsible for over half of the drainage for Orange County. These waterways are fed by smaller bodies like Terry Gulley and Cole Creek. Up until the late 60’s, the Corps of Engineers assisted with dredging to improve drainage in the Orange County area. I still believe that the federal government, and the resources there, provided by your tax dollars, must still play a vital role in helping to make the drainage by these bodies more efficient and even take some of the strain off of them through the use of detention ponds.

A November 2015 report has recommended eleven detention ponds to take the pressure off of some of these waterways and help prevent flooding by controlling the water before, during, and after a potential flooding event. The estimated cost of this project, (approximately $1.14 billion) is very close to the estimated flooding damages caused by some of the recent catastrophes. In my way of thinking, if we can allocate dollars to prevent or mitigate a disaster, rather than use those same dollars to repeatedly clean up the wreckage from a disaster, we should get these projects in motion. If we concentrate on prevention, fewer people will lose their homes and businesses.

I realize nothing created by man is perfect or can fully guarantee that Orange County will never flood again. However, my opponent has been in office through several flooding disasters — through three terms — and nothing substantial has been done. Southeast Texas needs leaders with the drive and work ethic to safeguard our communities and our economy. When elected, I pledge to be that leader.

I humbly ask for your vote on March 3rd, in the Republican Primary for Congressional District 36. Read more on my website