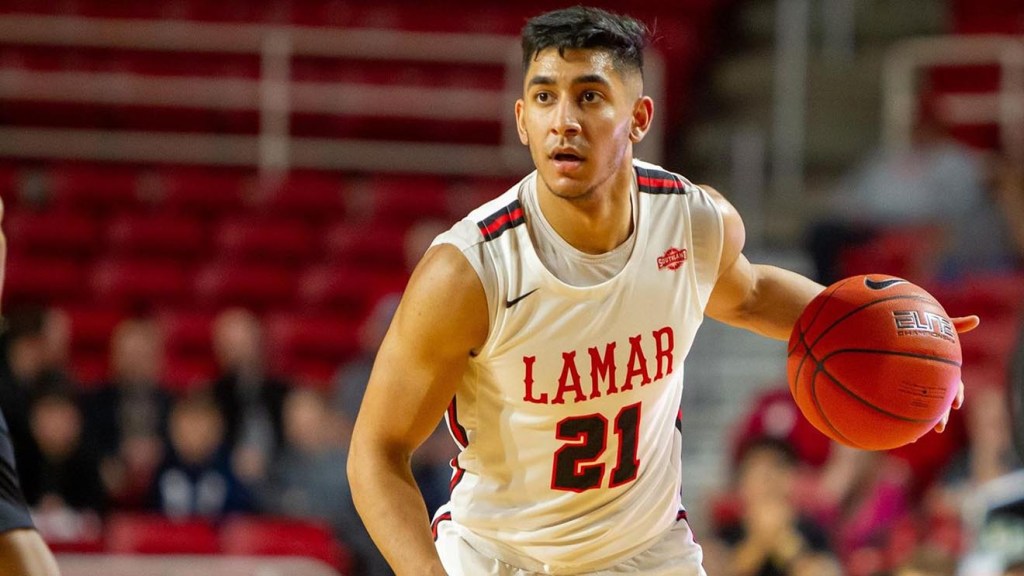 BEAUMONT, Texas – A total team effort – that is the best way to describe a shorthanded Lamar University’s 74-67 victory over Central Arkansas Wednesday evening at the Montagne Center. Big Red finished the night with four players in double figures, including 12 points and 10 rebounds from senior T.J. Atwood, and every player who entered the game scored at least eight points for the Red and White.

“When you win the war on the boards, that indicates good effort, plus we held a good three-point shooting team to just 27 percent from the arc. We knew that all five guys on the court could shoot the three at any time and I thought we did a good job defending them,” added Price.

The Cardinals finished the night shooting 25-of-60 (.417) from the field, and nearly just as accurate from three-point range converting 7-of-17 (.412) attempts. Big Red didn’t allow their guests extra possessions Wednesday turning the ball over just 10 times.

LU was led in scoring by freshman Anderson Kopp who overcame a tough shooting performance to score 14 points and pulled down nine rebounds – the majority of which came at critical times late in the game. Senior V.J. Holmes also just missed a double-double with 12 points and nine assists. Junior Avery Sullivan overcame foul trouble to score 10 points and grab six boards. Junior Ellis Jefferson got the start Wednesday and picked up some of the slack from long range scoring nine points on 3-of-6 (.500) shooting from beyond the arc.

Big Red’s bench outscored UCA, 17-9, on the night led by nine points on 2-of-4 three-point shooting from freshman Ayaan Sohail. Classmate David Muoka also came up with several key baskets and finished the night with eight points and five rebounds, including a follow up dunk in the first half.

Central Arkansas shot 27-of-62 (.435) from the field but struggled from long range. The Bears finished the night 7-of-26 (.269) from beyond the arc. UCA didn’t turn the ball over much Wednesday but when they did the Cardinals made them pay scoring 17 points off the mistakes.

Despite a sluggish start out of the gate, the Cardinals used 20-7 run, sparked by a Sohail three ball, to build a 13-point first-half advantage. Although the double-digit lead didn’t last long the Cardinals never surrendered their advantage for the remainder of the game. UCA managed to trim the lead down to a single possession just once following a Hayden Koval basket in the paint – one of his team-high 14 – but the Cardinals responded by pushing their lead back to seven and put the game away at the free throw line.

The Cardinals return to action Saturday when they travel to Abilene, Texas to take on Abilene Christian. The game against the Wildcats will tip off at 7 p.m. from Moody Coliseum.