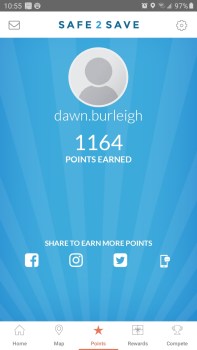 Screen shots to show how quickly one can acquire points while not texting while driving. 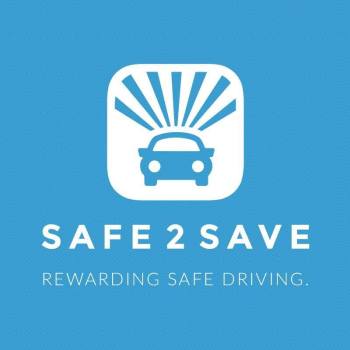 An avoidable car crash involving a college student texting while driving and striking another student out for a jog inspired Marci Corry to become practiced in finding a solution to prevent distracted driving.

“I was in a terrible car crash myself, in college,” Corry said. “I had fallen asleep at the wheel, which is a type of distracted driving.”

After hearing about the wreck involving the jogger, Corry said, “I could not sit on my hands and I had to do something proactive.”

The answer to the problem was the same as the issue, the phone in the driver’s hands.

Distracted drivers is the highest preventable death in the nation for all people under the age of 54.

It only took four months for the app to go live, according to Corry. Since 2016, SAFE 2 SAVE, the safe driving app which awards people for driving undistracted, has grown from just a few hundred users to over 290,000.  Here’s how the app works. People are able to redeem their points online and at restaurants in College Station, Houston, San Antonio, and at Bush Airport.

The app is now launching in Orange and in just a day’s driving, one can acquire enough points to redeem for items available at Dairy Queen.

Use the code ORANGE when you download SAFE 2 SAVE and you receive 800 points. This equals free food at all types of restaurants all around the area.

“SAFE 2 SAVE is driving our numbers up.  I have it and it is effective at reminding me to go into restaurants as well,” Jose Hernadez, DQ franchise owner in The Woodlands and Willis, Texas. “I also love that I can see what customers are redeeming and figuring out what rewards I can offer that intrigue my customers the most to use the app.”

Corry sees it as a positive effect.

“It is a caused based idea which really makes a difference in a community,” Corry said.

When she began with the idea, she only expected to impact the College Station area.

“I had no idea it would grow this quickly or how big a need for it,” Corry said. “People truly know they should not text and drive, but it is a habit they have a hard time trying to break. This app helps reward the driver quickly.”

The app is free and available in English or Spanish.

The more the app is used locally, the more places it can be used nationally.

The app was introduced at a high school and a difference was noticed at an intersection near the school.

“A Houston high school was introduced to the app and surveys of a nearby intersection showed a 21-percent reduction o0f teenagers on the phone,” Corry said.

Inside the app, is the opportunity to challenge friends or family members to see who can get the most points as another way to encourage people to put down their phones while driving.