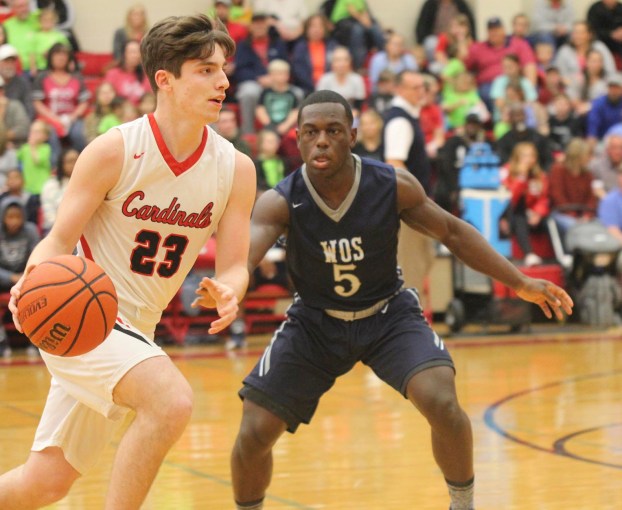 BRIDGE CITY – After struggling, despite falling in tight games, through their first five District 22-4A hoop encounters, the Bridge City Cardinals have never stopped scrapping.

That scrapping finally paid off Friday night at Cardinal Gym as the Cardinals toppled Orange County rival West Orange-Stark 54-53 in overtime to capture their first district win of the season to wrap up the first half of 22-4A play.

Bridge City guard Austin Richardson, who led the Cardinals with 22 points and hit five three-point bombs throughout the night, sent the Cardinals (11-16, 1-5) past the Mustangs (13-16, 2-4) with a hard-driving layup with just 2.7 seconds left.

The Mustangs then turned the ball over before they could get off a desperation shot.

Shemar Manaway hit a nice baseline jumper from the right side to put the Mustangs up 53-52 with 15.4 seconds left after the Cardinals had missed three straight free-throws at the other end. However, Richardson sealed the Mustangs’ fate as the Cardinals let the clock wind down and he got the “touch” and went smoothly end for the game-winning layup.

WO-S’ Jalon Ross barely missed a desperation three-point shot at the end of regulation that hit the center of the rim but it fell just a little bit short as the two went into overtime tied 49-49.

Grant Boudreaux tallied 11 points and snared six rebounds for the Cardinals. Ethan Oceguera notched nine points and a game-high nine rebounds while Dylan Collazo chimed in with six points and nailed two three-pointers at crucial times of the game.

The Mustangs finished with a slight 37-33 rebounding margin.

The Cardinals did a solid job protecting the ball as they committed just 13 turnovers while the Mustangs had 17.

Bidge City was 8-of-13 from the free-throw line while the Mustangs only attempted two charity shots all night, making one.

The Cardinals led 18-14 at the end of the first quarter and 31-25 at halftime thanks to burying seven three-pointers in the half, with Richardson hitting three of them and Boudreaux two. Richardson had 13 points in the half while Boudreaux had eight.

The Mustangs kept pace with Spraggins scoring 13 of his points in the half and WO-S outrebounded the Cardinals 18-8 in the first 16 minutes.

Oceguera hit a huge desperation three-point bomb from just inside halfcourt to put the Cardinals up 31-25 at intermission.

The Mustangs got six points from Ross in the third quarter as WO-S trimmed it to 42-39 entering the fourth quarter.

The Cardinals will travel to first-place Silsbee on Tuesday. The Mustangs have their bye Tuesday and will welcome Silsbee to Mustang Gym next Friday.