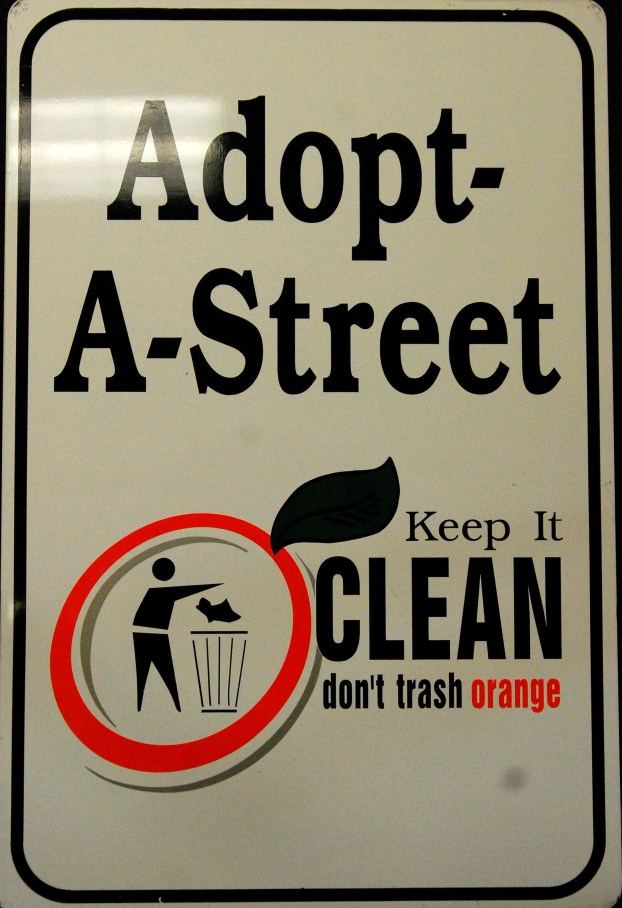 City of Orange to re-launch of Adopt-a-Street Program

Leaders from each organization that signed up to help keep Orange streets clean as asked to bring their volunteer teams to meet at Saint Mary’s Catholic School on Saturday, January 25, 8 a.m.-10 a.m. for the program re-launch.

Pick up supplies will be provided by the City of Orange.

Additional volunteers are always welcome to join the teams.

The mission of the City of Orange Adopt-A-Street Program is: ‘To clean and beautify the community through volunteerism and to encourage community participation through promoting pride in clean neighborhoods.’

The program offers an opportunity for volunteer groups and businesses to team up with the city to help clean an beatify both sides of a selected half mile to two miles sections of a street for a two-year period and agree to remove litter at least three times a year.

The key streets identified by the city as ideal for adoption are:

The original Adopt-a-Highway program began right here in Texas in 1985. Since then, it’s grown into a nationally and internationally recognized litter-prevention effort, saving taxpayers’ dollars and keeping our rights of way clean.

Adopt-a-Highway currently has more than 3,800 participating groups across the state, and we salute those thousands of individuals who dedicate their time to actively make a difference and keep Texas beautiful, according to the Texas Department of Transportation website.

In Orange, there are 14 streets which were adopted by local organizations such as Golden K Kiwanis Club of Orange which adopted 10th Street from Polk Avenue to Western Avenue, 28th Street from Sunset Drive to Park Avenue and Main Street from 16th Street to South Street.

According to city ordinance Sec. 6.202 – Prohibited Conditions states: It shall be unlawful and it is hereby declared to be a public nuisance for any person, including the owners, agents, occupants, or representatives of any nonresident owner of any real property to permit any of the following upon such property for any period of four (4) consecutive days or longer:

Filth, carrion or other impure or unwholesome matter of any kind;

Rubbish or any other objectionable, unsightly or unsanitary matter of whatsoever nature:

Weeds, grass or brush to grow to a height of more than twelve (12) inches from the surface of the ground on said property or on that portion of the easements, rights-of-way or alleys which abut such property and lay between the centerline of any such easement, right-of-way, or alley and the property line of such property.

For anyone interested in the Adopt A Street program in Orange, contact Director of Planning and Community Development Kelvin Knauf at 988-7397

The W.H. Stark House is excited to announce 2nd Friday and Saturday Monthly Tours for the 2020 season on Friday,... read more