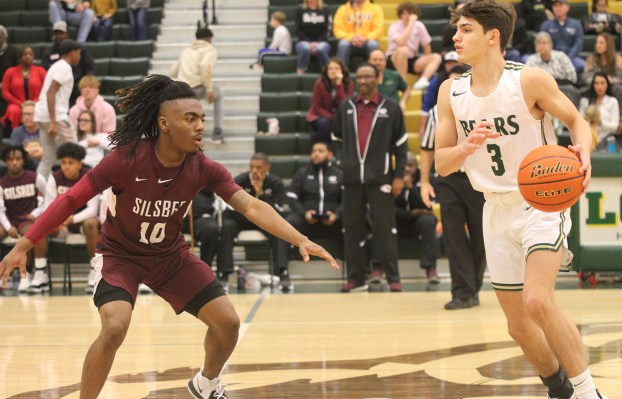 Van Wade/Orange Leader LC-M’s Kaine Humberson (3) looks to get past the defense of Silsbee’s Jordan Edwards (10) at The Grove.

Silsbee wears down Bears in second half

LITTLE CYPRESS – They battled District 22-4A powerhouse and perennial state power Silsbee strong for a half but the Little Cypress-Mauriceville Bears simply ran out of gas in the second half against a deep Tiger team as Silsbee notched a 90-60 victory at The Grove Tuesday night.

The Bears, sparked by Jesse Doucette and freshman Ben Elliott, rallied the Bears all the way back to within 46-39 at the half as the first 16 minutes had a lot of offensive fireworks.

However, the Tigers, led by standouts Braylon Bush and Chris Martin, started pulling away in the second half.

Bush filtered in a game-high 26 points for the Tigers while Martin poured in 22 points and snared a team-high seven rebounds. Bush scored 10 of his points in the decisive third quarter spurt.

K’Drian Cartwright played well on both sides of the court with numerous steals and finished with 16 points. Shan Gilder had 16 points and six boards for Silsbee.

The Bears actually finished with a 41-33 rebounding edge over the Tigers.

Junius Stevens had eight points and 10 rebounds for the Bears. Ethan McCollum yanked down 10 boards while Da’Marion Morris hauled down five.

Raymond Baltrip and Jordan Edwards had five rebounds apiece for the Tigers.

Silsbee protected the ball well throughout the night as the Tigers committed just seven turnovers while forcing the Bears into 20.

The Bears will look to get back on track Friday when they host the Hamshire-Fannett Longhorns to close out the first half of 22-4A play.