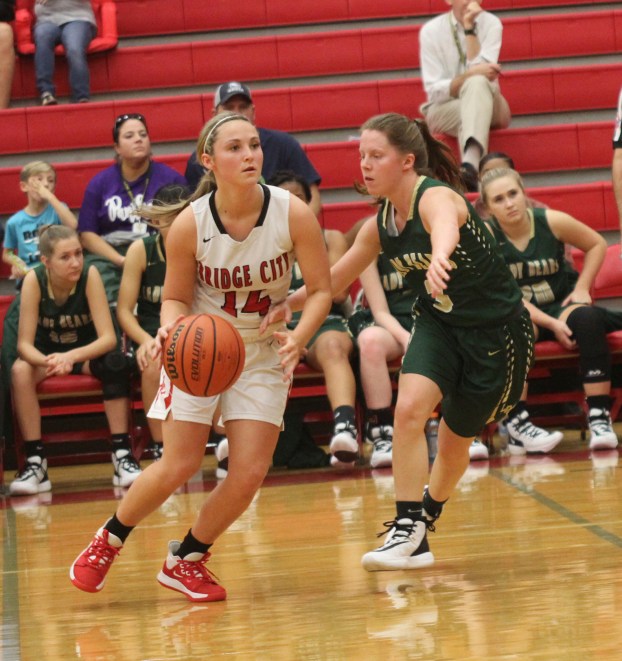 Van Wade/Orange Leader Bridge City’s Kyndall Harrison (14) looks to get around the defense of LC-M’s Brielle Butler (3) during the first half at Cardinal Gym.

BRIDGE CITY – Two teams that have struggled of late, looking to remain in the thick of the District 22-4A girls basketball race, battled at Cardinal Gym Tuesday night and it was the Bridge City Lady Cardinals that squeezed out a 32-29 victory over the Little Cypress-Mauriceville Lady Bears.

Both teams struggled mightily from the field throughout the night but the Lady Cardinals (16-9, 2-3) made enough key plays and free-throws down the stretch to turn back the Lady Bears (12-8, 1-4).

The Lady Cardinals led 22-15 to start the fourth quarter.

The Lady Cardinals then went on a 9-2 run to go up 31-23 after a big shot from Kaylen Smith. Lady Bear Zoe Levens, who led her team with eight points, made it interesting late as she scored all eight of her points in the last four minutes, including two three-pointers that trimmed the margin to two late.

Both teams had 29 rebounds. The Lady Bears had 20 turnovers while the Lady Cardinals had 16.

The Lady Bears led 8-7 after the first quarter as Perry and Brielle Butler each had three-pointers.

The Lady Cardinals went on a 10-4 spurt in the second period to lead 17-12 at intermission. Harrison and Destiny Block hit two crucial three-pointers to lead the BC spark.

The Lady Cardinals outscored LC-M 5-3 in the third as both teams scored just one field goal.

The Lady Cardinals will venture to Lumberton Friday to face the Lady Raiders while LC-M returns home to host West Orange-Stark.

ORANGEFIELD – The Orangefield Lady Bobcats remain perfect in District 22-3A play after they belted the Anahuac Lady Panthers 76-33... read more