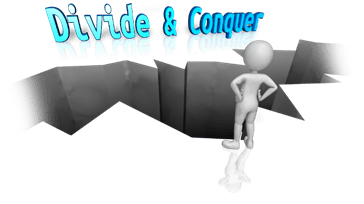 Divide and Conquer in use today

The term “Divide and Conquer” has been around for thousands of years, often attributed to Julius Caesar in the first century BC. Russia uses that same strategy today, in the 21st century.

Russia’s goal is to prey on and capitalize on existing philosophical divisions within populations, such as the USA, and increase overall mistrust and paranoia against democratic institutions. In the process, justice systems are portrayed as corrupt, inept, and hypocritical using disinformation.

Actually, the word “disinformation” has been derived from the Russian term “dezinformatsiya” which was first used by Josef Stalin in 1923 as the name of a KGB black propaganda department. This disinformation strategy is a commonly known fact within the worlds of national security and cybersecurity.

Another word for it in common use today is “fake news”. The purpose is to drive even deeper the wedges that divide different factions within a population. This could be conservative vs liberal, Christian vs Muslim, good vs bad, religious vs secular, right-to-life vs woman’s choice; it goes on and on. The end goal, just as with Julius Caesar is to Divide and Conquer.

Methods used by Russia to distribute disinformation have included its Kremlin-controlled mouthpieces, Sputnik News and television outlet Russia Today (RT). The 2016 annual report of the Swedish Security Service, in reference to disinformation, stated: “We mean everything from Internet trolls to propaganda and misinformation spread by media companies like RT and Sputnik.”

Now, in the 21st century, Russia uses social media platforms such as Facebook and Twitter to spread disinformation. Facebook believes that as many as 126 million users have seen content from Russian disinformation campaigns on its platform.

Twitter has said that it had found 36,000 Russian bots spreading tweets related to the 2016 American election. One only has to look at the Mueller Report for more details on Russia’s involvement in the 2016 elections.

Elsewhere, Russia has used and continues to use social media to destabilize former soviet states such as Ukraine and other western nations such as France and Spain.

A report released by the US Senate Select Committee on Intelligence in October 2019 offers a most comprehensive look at the efforts of the now-infamous Russian propaganda factory known as the Internet Research Agency (IRA).

The IRA made over 61,500 Facebook posts, 116,000 Instagram posts, and 10.4 million tweets, all aimed at sowing discord and inflaming tensions among Americans, says the report.

More than any other group, the IRA aggressively targeted black Americans on every social media platform before and after the 2016 election. More than 95 percent of the content the IRA uploaded to YouTube focused on “racial issues and police brutality,” the report notes, and five of the top 10 IRA accounts on Instagram targeted “African-American issues and audiences.”

Russia’s attempt to exert influence over our 2016 election was but one part of a “broader, sophisticated, and ongoing information warfare campaign” designed to divide America by inflaming cultural, political, and social tensions. The influence operations began long before 2016 and remain active today, the report says.

It’s not just the Russians

As Commander-in-Chief of American military, President Trump approved an American airstrike that killed top Iranian military commander Gen. Qassem Soleimani in Baghdad. Trump proclaimed the pre-emptive strike as being defensive against an enemy that was actively developing plans to attack American diplomats and service members in Iraq and throughout the region.

Critics of the President argue that it could lead America to a war with Iran. Although they are entitled to their opinions, when they start publicly attacking the Commander-in-Chief and accuse him of illegally making decisions that, by law, he is responsible for, they are planting seeds of doubt and distrust, to confuse, distract, polarize and demoralize the voters solely because an election is coming up.

In other words, these critics are doing exactly what the Russians would gladly pay them to do. If the Mueller Investigation were still going on, they could be accused of being Russian operatives, just as many other Americans were. They are aiding and abetting the Russian strategy of Divide and Conquer.

When are these supposedly smart politicians in Washington going to learn that they too are being manipulated into doing exactly what our enemies want them to do?

If they can’t, they should be replaced – regardless of which side of the aisle they sit on.

Immigration and the prison industrial complex

In the past year, the struggle over immigration rights continued along a broad array of fronts.  There were significant setbacks, such... read more