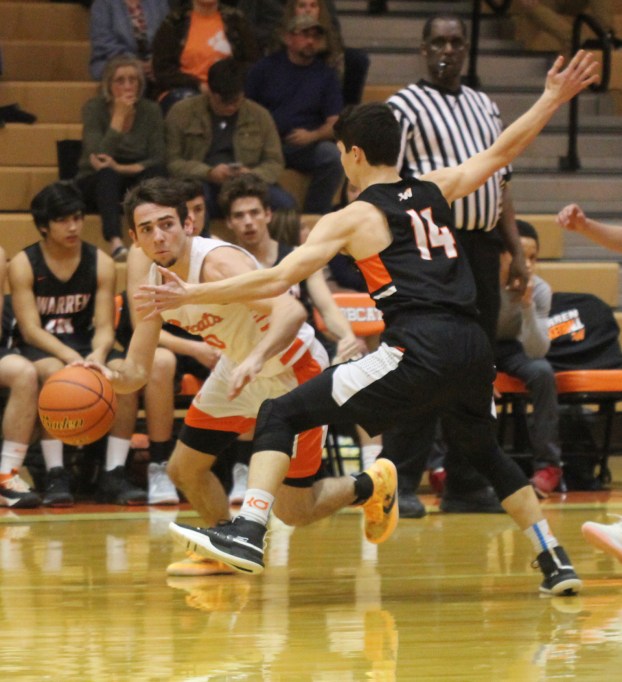 ORANGEFIELD – Turning up their defensive intensity after the first quarter, the Orangefield Bobcats were able to dart past the Warren Warriors 69-47 in District 22-3A action at Bobcat Gym Tuesday night.

Orangefield outscored the Warriors 36-22 in the middle two quarters and then finished the game with a 20-10 spurt in the fourth period.

Bryce Bergeron led the balanced Bobcat attack with 16 points. He had 10 in the first quarter, including two three-pointers.

The Bobcats forced the Warriors into 26 turnovers while only committing 12 of their own.

The Bobcats were just 12-of-24 from the free-throw line while Warren went just 2-of-4.

Michael Mouton tallied a game-high 17 points for the Warriors and collected a double-double as well as he led them with 10 rebounds. Mouton had eight of his points in the first quarter.

Keaton King tallied 10 points, eight of them coming in the second quarter as he finished with three three-pointers. He also added five rebounds.

The Bobcats outscored the Warriors 15-9 in the third quarter as Bryant had seven points in the quarter.

The Bobcats wore down the Warriors in the fourth as Warren had no answer for DuBose and his “drive” game as he scored 12 of his points in the period.

The Bobcats will look to continue their winning ways Friday when they visit Kountze.

HAMSHIRE – The Bridge City Cardinals dropped a hard-fought 61-54 District 22-4A decision on the road against the Hamshire-Fannett Longhorns Tuesday night.

Austin Richardson led the Cardinal attack with 20 points while Grant Boudreaux had 11 points and Gabe Castillo filtered in 10.

ORANGEFIELD – The Orangefield Lady Bobcats improved to a perfect 4-0 on the District 22-3A season with a convincing 67-38... read more