Saturday shooting is accidental according to initial investigation 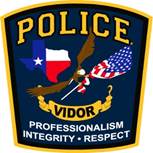 PRESS RELEASE — On Saturday, January 4, 2020, at approximately 8:25 a.m., the Vidor Police Department Dispatch center received a call of an accidental shooting in the area of Old Spanish Trail and School House Ditch. The reporting party advised that a 15 year old had accidentally shot himself while handling a loaded 22 caliber pistol. The child was transported to Christus St. Elizabeth Hospital with non-life threatening injuries.

As of this time the investigation shows that the 15 year old victim was fishing with a friend when he mis-handled the pistol causing it to fire. The friend immediately contacted 911 via his cell phone. The investigation is on-going.

Students of the month