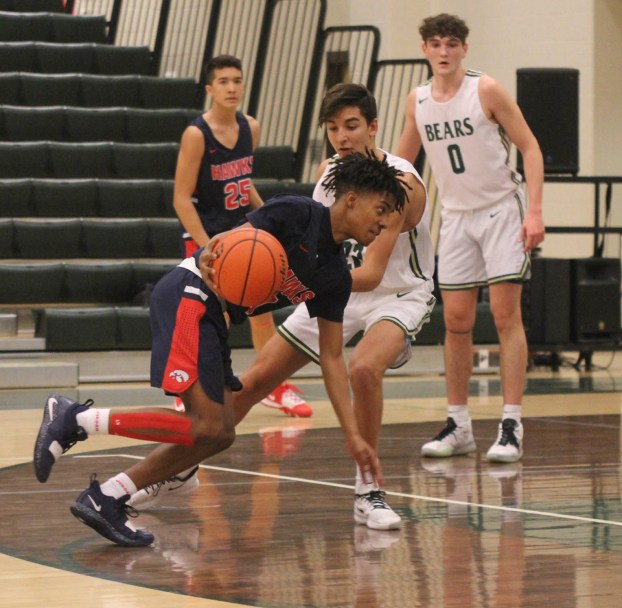 LITTLE CYPRESS – Utilizing a 19-0 spurt late in the third quarter and halfway into the fourth, the Hardin-Jefferson Hawks glided past the Little Cypress-Mauriceville Bears 79-50 in the District 22-4A opener for both squads at The Grove Friday night.

R.J. Sears led the Hawks with 18 points and had five rebounds. Trevon White notched 13 points and Baxter Worth had 11 points and five boards as three Hawks scored in double figures.

Elliott had 11 points and four rebounds for the Bears and scored eight of his points in the second half.

Jackson Smith had seven points and four rebounds for LC-M while guard Da’Marion Morris led the Bears with five rebounds.

H-J led 16-14 at the end of the first quarter as six different Hawks scored in the period.

Seven Hawks got into the scoring column in the second quarter with Sears scoring six of their points.

The Hawks finished with a 35-28 rebounding edge.

The Bears finished with 18 turnovers while H-J had 13.

The Bears will have a bye on Tuesday night before resuming 22-4A play Friday at Lumberton.

In other 22-4A action Friday night, the Silsbee Tigers (9-1) defeated the Bridge City Cardinals (10-12) 80-71 at Cardinal Gym. The Cardinals visit Hamshire-Fannett Tuesday night.

Sislbee fends off Bridge City in 22-4A opener