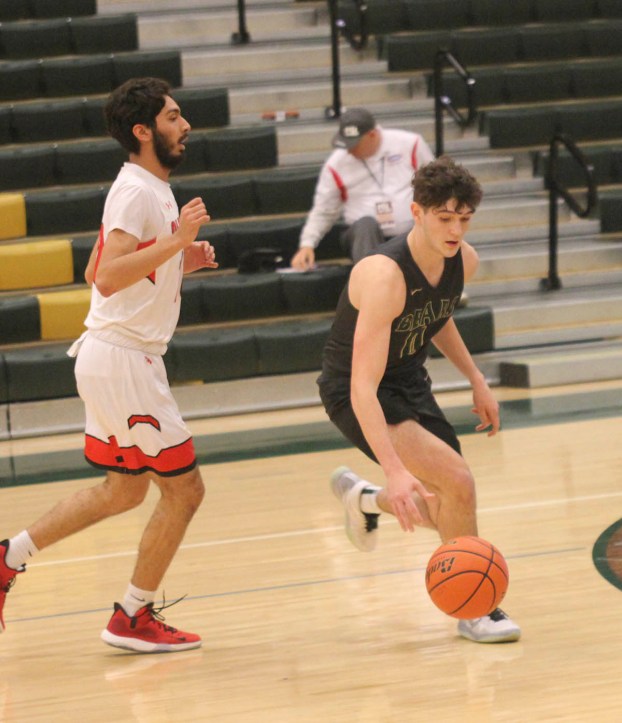 LITTLE CYPRESS – There was plenty of great action at the LC-M Tournament as it wrapped up Tuesday.

The host Bears received 32 points and eight three-pointers from Jesse Ducette as they skated past Palestine Westwood 60-50.

It was a three-point Bear lead going into the fourth quarter and they finished the game up with a 18-11 spurt.

Guard Da’Marion Morris had 11 points and eight rebounds for the Bears. Jackson Smith had a game-high 10 rebounds for LC-M while Brendon Brones had eight boards and Doucette added five.

The Orangefield Bobcats dug themselves a deep hole against Lufkin Hudson, rallied all the way back to within two points but eventually fell to the Hornets 46-31.

The Hornets raced out to a 17-3 lead by the end of the first quarter and then shooting guard Coy Bryant rallied the Bobcats back by the end of the third period as Orangefield eventually trimmed it to 27-24 entering the fourth.

Bryant poured in a game-high 19 points and drilled five three-pointers.

However, the Hornets closed out the game with a 19-7 spurt, thanks to Bransen Cathcart, who scored all 12 of his team-high 12 points in the fourth period by hitting four three-point bombs.

Braden Cathcart had 11 points for the Hornets, including three three-pointers in the first quarter.

The Hornets finished with a 31-15 rebounding edge. Collin Pitts had six points and seven boards for Hudson while Branden Carriere and Kanaan Holder had five rebounds apiece.

The Cleveland Indians downed the Bridge City Cardinals in a 51-47 nailbiter.

The Indians outscored the Cardinals 19-10 in the decisive fourth quarter to nail down the win.

Jevarrick Butler led the Indians with 18 points and had six rebounds. Indian post DeVonte Robertson had a big double-double, scoring 14 points and yanking down 14 rebounds while Jonathan Aguilar had nine points and three three-pointers.

Cleveland finished with a 32-26 rebounding edge.

The Cardinals fell to a stout Lufkin Hudson unit 64-34 in their last game.

The Hornets ran away from the Cardinals with a 20-5 spurt in the fourth quarter.

Teraven Rhodes led the Hornets with 20 points while Keilohn Ferrell had 15 and Braden Cathcart added eight.

Austin Richardson led the Cardinals with nine points and he scored eight of them in the third quarter. Ethan Oceguera added eight points for the Cardinals.

Hudson finished with a 37-22 rebounding edge.

WINNIE – The West Orange-Stark Mustangs wrapped up the East Chambers Tournament with a pair of nice victories. The Mustangs... read more