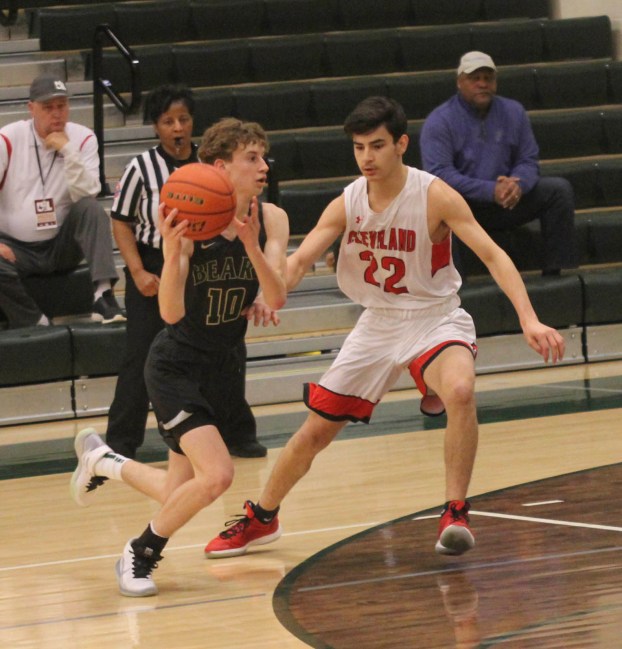 Van Wade/Orange Leader LC-M’s Scout Denman (10) tries to get past Cleveland’s Jonathan Aguilar (22) during action at the LC-M Tournament Monday.

LITTLE CYPRESS – The host Little Cypress-Mauriceville Bears got off to a nice start in their own LC-M International Paper Tournament Monday by downing the Cleveland Indians 65-53 at the Grove.

Also, the Bridge City Cardinals toppled the Orangefield Bobcats 59-45 in the other big game of the day Monday.

The Bears trailed 26-22 at intermission but exploded in the third quarter to dart past the Indians.

Sparked by a huge game by Jesse Doucette, the Bears outscored Cleveland 27-10 in the third quarter to take control of the contest.

Doucette fired in a game-high 32 points, 22 of them coming in the second half. He sparked the third quarter run with 10 points in the period and scored 12 more in the decisive fourth quarter. Doucette finished with six three-pointers and also added five rebounds.

Cleveland was sparked by the effort of Jevarick Butler, who filtered in a team-high 25 points and he hit three three-pointers.

Alex Martinez had 10 points and five rebounds for the Indians while Trumarcus Williams had seven points and Devonte Robertson had six points and eight rebounds.

The Bears finished with a 29-24 rebounding edge. LC-M was 4-of-7 from the free-throw line while the Indians were also 4-of-7.

LC-M outscored the Indians 43-27 after intermission. The two teams were tied 14-14 at the end of the first quarter.

In Bridge City’s win over Orangefield, the Cardinals outscored the Bobcats 21-13 in the second quarter to go up 29-19 by intermission and expanded their cushion to 48-34 by the end of the third quarter.

Austin Richardson powered the Cardnal arsenal with 14 points and connected on four three-pointers. He helped lead the second quarter surge with eight points, including two three-pointers.

The Cardinals finished with a 28-24 rebounding edge.

Bridge City was 4-of-5 from the free-throw line while Orangefield was 6-of-11.

Orangefield dropped a 67-52 decision to Port Neches-Groves in their first game Monday.

Khristian Curtis scored a game-high 26 points for the Indians while Noah Marchak scored 13 and Kenneth Muller 10.