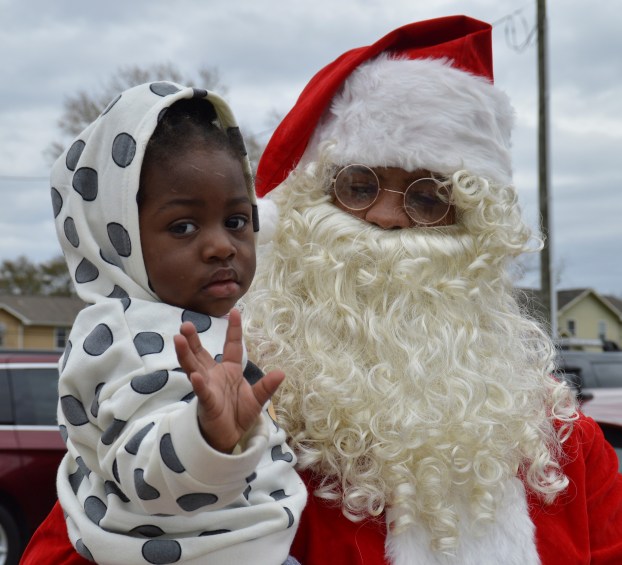 Dawn Burleigh/The Orange Leader JaDaia Robinson, 2, waves to the crowd as she enjoys Santa holding her on Saturday during the inaugural Christmas Bash in Navy Park.

Some children in Orange County will sleep a little better as they discover the answer to their questions they posed to Santa.

In the Letters to Santa section of this edition, many children asked, in their letters, what was Santa’s favorite cookies. This is important information to have, especially if one is asking for something extra special under the Christmas tree.

Despite the numerous chocolate cookies being left for Old Saint Nick, while he enjoys them, they are not his favorite.

“Oatmeal cookies,” Santa Claus said. “They are my favorite.”

While Rudolph may be the most famous reindeer of them all, Cupid tends to be Santa’s favorite one.

“Cupid by far is my favorite,” Santa said. “He came out with his own CD a couple of years back. Been my favorite ever since.”

And yes, all the reindeer are doing fine.

A question that is asked every few years concerns Santa’s long white beard. A movie claims he sleeps with the whiskers outside the covers to help make them grow. Santa said he actually keeps them inside the covers.

“I use an S-curl kit,” Santa said. “And I use Soul Glo, which was made famous by Eddie Murphy in Coming to America.”

The names of Santa’s elves are Alabaster Snowball, Bushy Evergreen, Pepper Minstix, Shinny Upatree, Sugarplum Mary and Wunorse Openslae. These six elves have the most important jobs for Santa.

Alabaster Snowball is in charge of the list that informs Santa whether children have been behaving. Bushy Evergreen invented the toy-making machine that Santa uses, and Bushy is in charge of all the toys. Pepper Minstix ensures that Santa’s workshop stays hidden, and Shinny Upatree co-founded the secret village where the workshop is hidden. Sugarplum Mary is the assistant to Mrs. Claus, and she helps create treats and sweets. Wunorse Openslae designed Santa’s sleigh, and he looks after the reindeer, according to reference.com

But according to Santa, he has a fondness for other elves.

“By far, my favorite elves are all the teachers,” Santa said. “They actually see the kids every day and know who is being naughty or nice. Teachers are the best elves and I love them.”