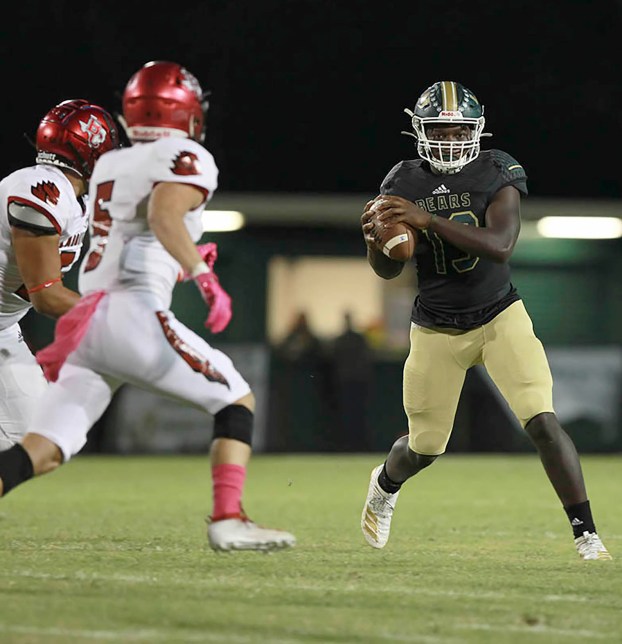 Mark Pachuca/Orange Leader LC-M quarterback Ethan McCollum (13) looks for a receiver against Bridge City this season. McCollum is the MVP of the 2019 All-Leader Team.

Another high school football season is under wraps as Christmas is definitely knocking on the doors.

In the Orange Leader area, it was quite a season for many players, especially those seniors that wrapped up a great time representing their respective schools.

All for schools we cover found their way to the playoffs.

Once again, the West Orange-Stark Mustangs zipped to yet another district crown. It marked the 10th straight season that the Mustangs nabbed a district title.

Over at Orangefield, Coach Josh Smalley and Co. were eager to get the season started with a hard-working, lunch-pail group that was full of seniors wanting to go out in style.

Well, the Bobcats accomplished that and more as they went 9-2 and were runnerups out of District 12-3A Division I.

The Little Cypress-Mauriceville Battlin’ Bears zipped to a 6-5 mark under the direction of long-time coach Randy Crouch. The Bears battled their way to the third-place playoff berth out of District 11-4A Division I and accomplished something no Bear team had done since 1997 and that is to win a playoff game. The Bears hammered Stafford 48-21 in the bidistrict round.

The Bridge City Cardinals, led by Coach Allen DeShazo played hard down the stretch with a young squad and punched their way into the postseason as the fourth-place squad out of 11-4A.

I just want to thank everyone that was involved to make our season happen, including the skills of Caleb Adams and Ronnie Hughes in writing stories and the masterful photo work of Mark Pachuca and Tommy Mann, Jr. Also, much appreciation goes out to Dennis Sedtal, Aaron Burke, Chad Landry and Charley Elkins for provided stats on plenty of occasions.

So without further ado, the 2019 All-Orange Leader Team has been selected and there were plenty of standouts throughout the season.

LC-M senior quarterback Ethan McCollum is our Most Valuable Player. McCollum was so key in LC-M’s run to the playoffs as he powered the Bears at times both with his legs and arm.

Perhaps no one exemplified the hard-working Bobcats more than senior Clayson Choate, who easily nabs our Utility Player of the Year. Choate very seldom left the field. Choate was a tremendous defensive back and the best return man in 12-3A and even found time to tote the ball on offense at times as well.

Choate notched 80 tackles. He picked off five passes, two of them that he returned for TDs and he had a forced fumble. He averaged a whooping 39 yards per kickoff return, bringing three of them back to “the house” and he also averaged 22 yards a punt return and brought one back for a score for our Coach of the Year in Smalley.

LITTLE CYPRESS – Despite a cold-shooting night, the Little Cypress-Mauriceville Lady Bears made a strong rally late to take the... read more