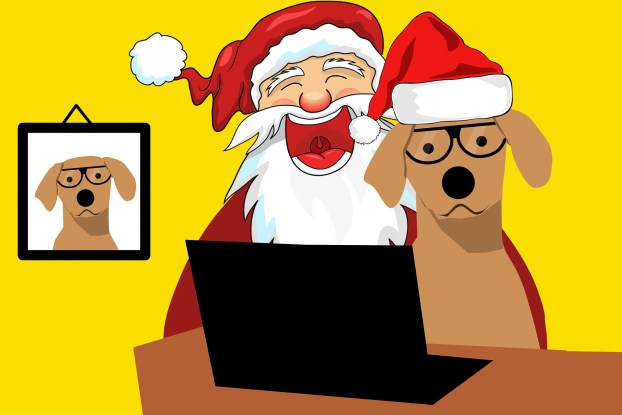 Story over a cup: A visit from Saint Nick (as retold by Bill the Dog) 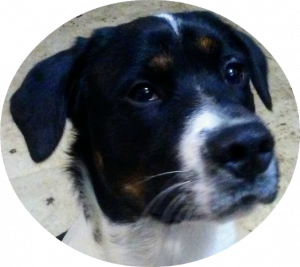 My human, Michael has let me, Bill write this column.

So, sit back as me, Bernie and Roswell entertain as only we can.

Bill, Bernie, and Roswell had the living room to themselves. They watched as the colored Christmas lights blinked on and off. Bill yawned and looked at his two brothers who were occupying the chairs on the other side of the room.

“My human,” he always referred to Michael that way, after all, to Bill, Michael was his. He only shared him with his brothers, his mother Jada, and Franchesca.

My human has asked me to read you the Christmas bedtime story of, “The Night Before Christmas. It is about Santa Claus”

Roswell’s and Bernie’s ears perked up and they looked at their brother. It sounded like fun, after all, they knew every year they got special tasty treats from Santa, so they waited for him to begin.

Bill dragged an older looking book from under the couch, where he had stashed it next to his growing collection of silverware and other odds and ends he thought were shiny.

Using his snout to push open the book, he cleared his throat to begin.

‘Twas the night before Christmas,

Bill shrugged, “I think it is a fancy was, anyway:

‘Twas the night before Christmas, when all through the house…Not a creature was stirring, not even a mouse;

Bernie stared carefully at the walls, trying to hear the scurrying of little feet. He asked, “we have mice?”

Bill sighed, “no, in the story:

The stockings were hung by the chimney with care, in hopes that St. Nicholas soon would be there;

Bernie squinted his eyes, “Who is Saint Nicholas? You said this was about Santa Claus!”

Roswell looked up, “Oh, Saint Nicholas is Santa’s street name. That’s what Google told me, so he can avoid being tracked by the illuminati.”

Bill or Bernie wasn’t sure if Roswell was giving them the right answer, but he did say it was on the interwebs so it must be true.

The children were nestled all snug in their beds, while visions of sugar-plums danced in their heads; And mamma in her ‘kerchief, and I in my cap, had just settled down for a long winter’s nap,

Bernie looked perplexed. He would admit since mealtime and running around defending the house against terrorist invaders was his favorite thing, he was not aware of too many other things. However, this had him confused,

“We sleep in comfy chairs, not beds. What is a ‘sugar-plum? You don’t have a cap.”

Roswell looked nervous, “Be afraid, sugar-plums in your dreams are signs the NSA is watching.”

Bill growled, “In the story”.

When out on the lawn there arose such a clatter, I sprang from the bed to see what was the matter. Away to the window I flew like a flash, tore open the shutters and threw up the sash.

Bernie bounded from his recliner barking wildly as he ran for the window, “INTRUDER ALERT! EVERYONE BE CALM!!!”

Bill tried desperately to read over the sound of his brother barking loudly.

The moon on the breast of the new-fallen snow gave the lustre of mid-day to objects below,
When, what to my wondering eyes should appear, But a miniature sleigh, and eight tiny reindeer,

With a little old driver, so lively and quick, I knew in a moment it must be St. Nick.

Bernie was confused again. Bill had said a sleigh with reindeer had invaded. Yet he saw nothing. Then again, he also had only seen snow once, and thought that is was tasty.

He walked back to his recliner and with a thud, jumped into it and curled up. He was not liking this story. It was not good for his nerves.

Bill cleared his throat and tried to continue,

Roswell snorted, “that’s the names given we are told they have. Have we ever seen a reindeer? Do you think that they would have code names? It is a military-style cover name. Those are handles.”

Bill looked, “What are you talking about?”

But Bill did not give Roswell a chance to answer, he knew that it would take far more than the rest of the evening. So, he read quickly.

As I drew in my hand, and was turning around, down the chimney St. Nicholas came with a bound.

Bill stopped reading, he was missing a page from the story. He knew it was there when he found the book and yanked it off the shelf. Then he remembered that he had gotten hungry and ate it. He hoped his humans wouldn’t notice.

He spoke not a word, but went straight to his work, and filled all the stockings; then turned with a jerk, And laying his finger aside of his nose, And giving a nod, up the chimney he rose;

Bernie and Roswell leapt off their chairs and ran to their stockings that were tacked on the wall. Even Roswell jumping up and trying to grab the bottom of his stocking did not allow him to pull it down to investigate. He looked angry, muttered something about conspiracies and sauntered back to his chair.

Bill cocked his head in confusion and decided to finish his narrative.

He sprang to his sleigh, to his team gave a whistle, and away they all flew like the down of a thistle. But I heard him exclaim, ere he drove out of sight, “Happy Christmas to all, and to all a good-night.”

This past year has been a wonderful year of writing articles to entertain and inform. To all my readers, I wish you a joyous holiday and prosperous New Year.

From the editor: Playing with Russian Dolls

Dawn Burleigh, Editor In my younger days, Russian Dolls were very popular although no one explained why to me. Russian... read more