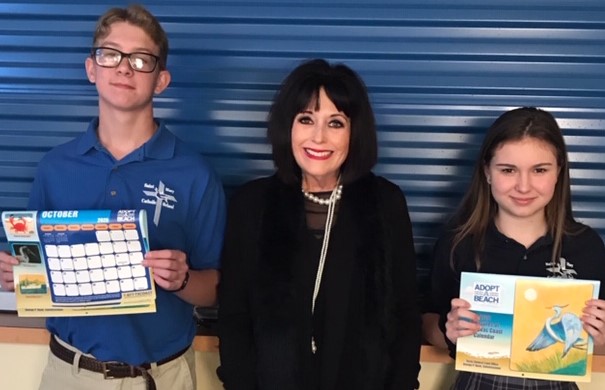 2019 Adopt A Beach Calendars have arrived in Orange

The 2019 Adopt A Beach Calendars have arrived in Orange from the Texas General Land Office /Commissioner George P. Bush.

The Grand Prize Winner on the cover was a Saint Mary School, Orange artist, Grace Wimberley. The grand prize winner was selected from the top 40 overall winners to receive the prestigious prize package.

Also winning a spot on the calendar was Dalton Hogan, another 6th-grade student at Saint Mary School. They were both selected in the 40 overall winners whose art is exhibited in this calendar.  3,900 students across Texas entered the Treasurers of the Texas Coast Children’s Art Contest.

Wimberley’s winning artwork is on the front of the calendars, the artwork of the top 40 winners appear inside the calendars to be distributed to schools throughout the state of Texas, in January 2020.

Grace and Dalton’s compositions were also exhibited in the South Central Gallery at the state capital along with the other winner’s artwork. They both received certificates of congratulations delivered to Saint Mary School with the Texas State Seal from Senator Larry Taylor who sponsored the exhibit.

Grace, along with her art teacher, Cindy Claybar, each received two round trip coach tickets from United Airlines to any destination in the 48 contiguous United States, Alaska, Canada, Mexico, Central America, as well as a 7 night Caribbean cruise from Royal Caribbean International departing out of Galveston, Miami, Tampa, Ft. Lauderdale, Port Canaveral, or Puerto Rico, and a class party at Schlitterbahn Water Park in New Braunfels.

To The Leader   For several years now, the Vidor Rotary Club has sponsored, with the help of generous local donors, the... read more